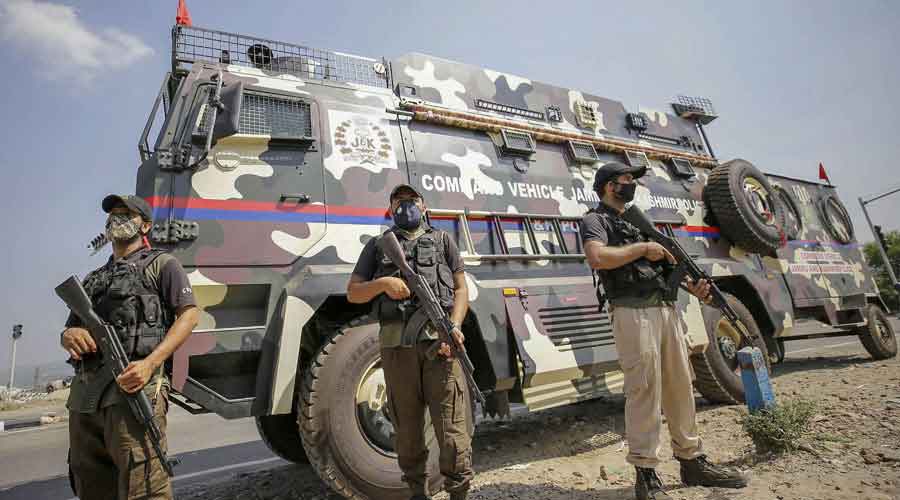 Saifullah, who had other aliases including Ismail, Adnan and Fauji Bhai, was killed along with another militant in the upper reaches of Dachigam forests in Pulwama.
Representational file picture
Muzaffar Raina   |   Srinagar   |   Published 01.08.21, 01:02 AM

Security forces on Saturday killed Jaish-e-Mohammad commander Saifullah alias Lamboo, a kin of the outfit’s founder Masood Azhar and one of the alleged masterminds of the 2019 Pulwama attack, in an encounter, the army said, claiming it to be the “biggest strike of the year”.

Saifullah, who had other aliases including Ismail, Adnan and Fauji Bhai, was killed along with another militant in the upper reaches of Dachigam forests in Pulwama.

Army’s Valley chief Lt General D.P. Pandey said Saifullah was one of the masterminds of Pulwama attack and his death brings a closure to the incident.

“He was one of the masterminds, having trained a local boy Adil who eventually blew himself up in an IED attack (in Pulwama). Ever since he has been responsible to continue to train people in making of IEDs and deployment of IEDs against security forces,” he said.

In February 2019, a suicide bomber drove a car laden with explosives into a convoy in Kashmir’s Pulwama, killing 40 soldiers — the deadliest attack on Indian forces in the region — bringing India and Pakistan to the brink of another war. Pakistan has denied any involvement in the attack.

“Based on an input generated by the police, boys from Victor Force launched an operation in the dense woods of Dachigam area of Pulwama on July 27. Given the fact that weather was inclement, so all cautions were taken,” Lt Gen. Pandey said.

Major General Rashim Bali, who heads the South Kashmir-based Victor Force, which along with the police and CRPF conducted the operation amid inclement weather, said the forces deliberately took a “very circuitous route” to surprise the militants.

“Today morning they (soldiers) had closed in on area where we were suspecting them to be. No sooner had we reached there, the dogs started barking,” he said.

The officer claimed the militants tried to use women and children as human shields and opened fire and lobbed grenades from behind them to escape. The claim could not be independently confirmed.

“But the cordon was very tight. No civilian suffered a scratch and they (militants) were dropped dead within two to three minutes. This is the biggest strike of the year,” the officer said.

Inspector-general of police Vijay Kumar, who addressed a joint briefing with top army officers, said Saifullah was the seventh militant involved in planning and execution of the Pulwama attack to be killed by the forces. He said there are 19 accused in the attack, of whom seven have been killed and seven arrested, while five more are still absconding.

Kumar said Saifullah was named in 14 FIRs and his name featured in the chargesheet filed by National Investigation Agency in the Pulwama attack. He said Saifullah was an IED expert and his death will minimise the IED threats across the Valley.

The other accused in the Pulwama attack include Pakistan-based commanders of Jaish —Azhar, 53, Rouf Asgar, 48, and Ammar Alvi, 47.