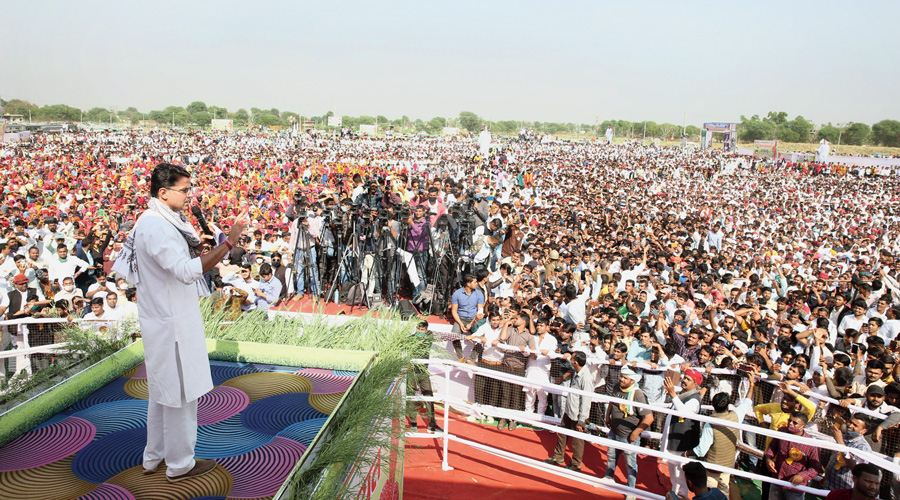 The Congress’s central leadership has asked all state units to extend their fullest support to the farmers’ movement across the country to demolish the BJP propaganda that it is a Punjab-centric protest, but leaders in only Rajasthan and Uttar Pradesh have so far demonstrated the resolve to hold big rallies.

Priyanka Gandhi Vadra, who is leading the charge in Uttar Pradesh, will address a kisan mahapanchayat in Muzaffarnagar on Saturday. Sachin Pilot has taken the lead in Rajasthan.

Although the Rajasthan Congress unit has also organised four farmers’ conferences attended by Rahul Gandhi during his recent two-day tour of the state, Pilot’s initiative indicates the factional feud hasn’t yet been resolved despite the reconciliation last year that stabilised the Ashok Gehlot government.

Pilot has held two massive kisan mahapachayats in Dausa and Bharatpur and a rally in Jaipur’s Chaksu without the presence of chief minister Gehlot and state party chief Govind Singh Dotasara. The MLAs considered loyal to Pilot, who had been part of the rebellion last year, were present on stage, giving credence to the perception that the young leader might be showing his strength despite losing his ministerial berth after the unseemly episode.

The farmers’ rallies have established Pilot’s popularity; he has also taken care not to attack the chief minister, rather concentrated his energies on creating awareness about the problems involved in the three controversial farm laws.

The stages have had the photographs of party president Sonia Gandhi, general secretary in-charge Ajay Maken, Gehlot and Dotasara to make them look like Congress events. The official Twitter handle of the Rajasthan Congress, however, doesn’t refer to these rallies, bolstering the impression that these were Pilot’s personal shows.

While the central leadership doesn’t nurse any grudge against Pilot for the effort to destabilise the government last year and has indicated that he will be accommodated soon in the high command structure, there is no denying the fact that the two factions haven’t buried the hatchet in Rajasthan.

But the farmers’ movement has provided an opportunity to Pilot to showcase his strength and brought into focus the failure of other leaders to organise protests in other states.

On Friday, general secretary in charge of organisation K.C. Venugopal wrote to all the state units to organise protests at the block and district levels against the farm laws and the steep rise in petroleum prices.

A senior Congress told The Telegraph: “While Rahul Gandhi has repeatedly expressed full support for and cooperation with the farmers, the organisational machinery has restricted itself to tokenism except in Rajasthan and Uttar Pradesh. Although farmers have been picketing Delhi’s borders, the party’s failure to organise any major programme in the capital to demonstrate the party’s solidarity with the peasants is pathetic. Even in states like neighbouring Haryana, and Maharashtra where the Congress is in government, the party hasn’t done anything spectacular.”

The Congress has not been able to organise a big movement in Haryana because of factional feud. Top leaders like Bhupinder Singh Hooda and state chief Kumari Selja usually work at cross-purposes.

Most other states units have also failed to rise to the occasion. The Congress has a strong rural base in Gujarat and many leaders believe a major farmers’ rally in the state would have sent out a message to the country, countering the BJP’s claim of a Punjab-centric movement. But the impending civic polls in Gujarat have been used as an excuse to restrict the protests to symbolism.

Tikait: will take tractors to Bengal