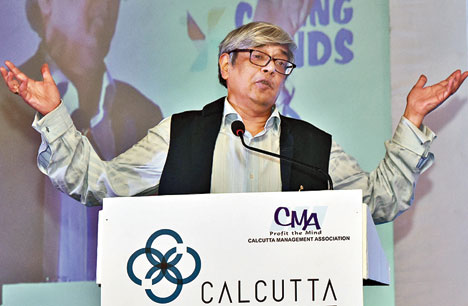 Debroy explained to journalist Karan Thapar for news website The Wire that deep cuts in personal income tax were on the cards in the wake of the government cutting corporate taxes.
Telegraph file photo
The Telegraph   |   New Delhi   |   Published 11.10.19, 04:59 PM

The head of the Prime Minister’s Economic Advisory Council has forecast that the government will substantially reduce personal income taxes to spur demand and boost economic growth which is at a six-year low.

Debroy explained to journalist Karan Thapar for news website The Wire that deep cuts in personal income tax were on the cards in the wake of the government cutting corporate taxes. 'Now that the corporate tax has come down, it is certain that the government or the finance minister will sooner or later reduce the income tax rate also,' Debroy said. He added that two riders should be kept in mind -- that there may be no exemptions and that direct taxes 'will have an element of progressivity about them'.

Debroy said he believed the GST's implementation was one of the key reasons behind India’s economic slowdown. The other reason, he said, was the global slowdown.

The Prime Minister's adviser declined to say what he expected the fiscal deficit to be, but he said that since the rate of growth was declining, and was less than what was forecast when the budget was announced in February, it was inevitable that the fiscal deficit would rise.

'I don't know what the figure will be, but the target (of 3.3 per cent) will be difficult to reach,' Debroy said.

When asked about GST, Debroy said: 'GST, I think, did contribute to a growth slowdown... and still is (contributing).' He said it was difficult to estimate how much GST had knocked off GDP growth in percentage terms, but it was clear to him that the way it was implemented was a major cause of the slowdown.

He said he believed the impact of demonetisation had not lasted beyond a quarter. But effects of implementation of the GST had been more long-lasting.

Debroy projected that overall annual growth for the financial year would be “around 6 per cent” -- a little less or a little more. He dismissed the noise around the 5 per cent growth rate India logged in the first quarter as unimportant. At the same time, he said the second quarter growth would not be much better than the expansion posted in the first quarter.

The widespread slowdown of the international economy, about which IMF recently issued a warning, was pulling down India’s potential growth, Debroy said. Otherwise, he said, India’s growth could be more around 7 per cent.

The economic adviser also said the recently announced cut in corporate taxes would not have a direct or substantial impact on driving investment. Rather, he said, it should be seen as a signal from the government that it was serious about boosting growth. He added that several measures could be announced by the government between now and the next budget due in February 2020 but refused to say what they might be.