Previous regimes kept UP in deprivation and darkness: PM

The thinking of these people is self-interest, their own development and that of their family, said Modi while laying the foundation stone for the Noida International Airport at Jewar in Uttar Pradesh 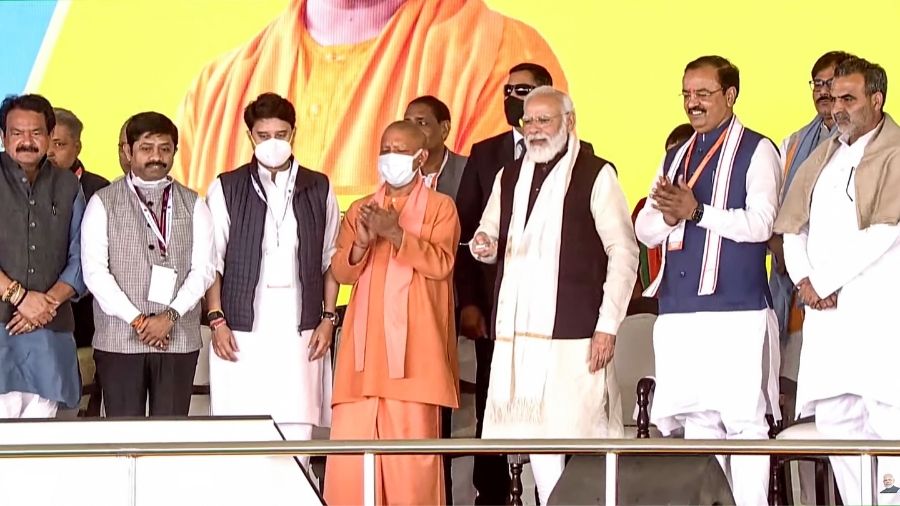 Prime Minister Narendra Modi along with Union Civil Aviation Minister Jyotiraditya Scindia, UP CM Yogi Adityanath and others at the event
PTI
Our Bureau, PTI   |   Jewar (UP)   |   Published 25.11.21, 03:30 PM

Taking a swipe at previous governments, Prime Minister Narendra Modi on Thursday said Uttar Pradesh was kept in deprivation and darkness earlier but it is now getting what it always deserved and is making its mark internationally under a "double-engine" BJP rule.

After laying the foundation stone for the Noida International Airport at Jewar in Uttar Pradesh, which would one of the largest aerodromes in Asia, Modi highlighted the development activities in the poll-bound state and said the new airport will help the state become an export-centre whereby even MSMEs will have easier access to overseas markets.

He said the Noida International Airport, slated to be completed by 2024, will become the logistics gateway for North India.

He asserted that infrastructure is "not politics for us but part of national policy. We are making sure that the projects do not get stuck, do not keep hanging. We try to ensure that the infrastructure work is completed within the stipulated time," Modi said.

In an apparent dig at the Opposition, Modi said some political parties in the country have always kept their self-interest paramount.

"The thinking of these people is self-interest, their own development and that of their family," Modi said.

He said that for the first time in seven decades, Uttar Pradesh has started getting what it has always deserved.

"With the efforts of the double engine government, today Uttar Pradesh is turning into the most connected region of the country," Modi said.

The airport, the second international aerodrome in Delhi-National Capital Region, is expected to be operational by September 2024 with an initial capacity to handle 1.2 crore passengers per annum.

The airport, spread over 1,330 acres of land, will be developed by Zurich Airport International AG.