PM Modi holds roadshow in Surat, waves to people gathered to greet him

The prime minister will inaugurate or lay foundation stones for various projects worth Rs 29,000 crore during the two-day visit to his home state 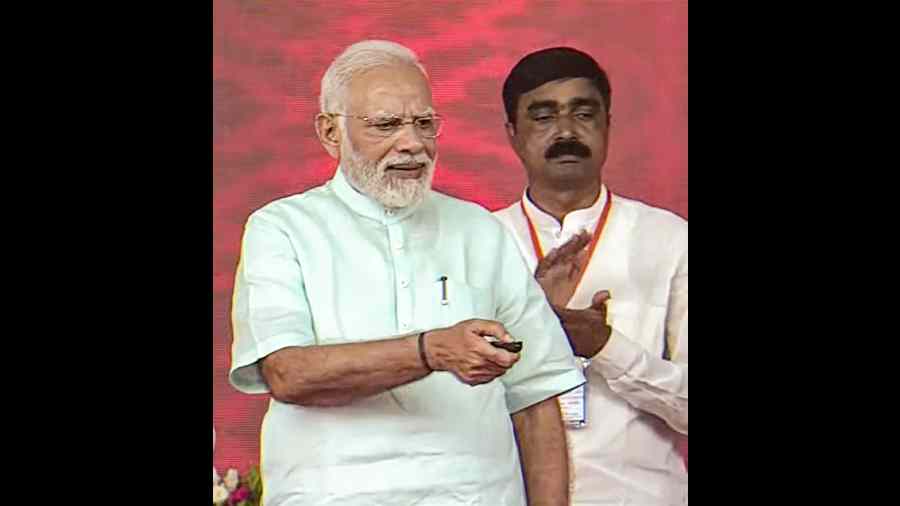 Prime Minister Narendra Modi held a roadshow here on Thursday as part of his two-day Gujarat visit and waved to people standing on roadsides since early morning to greet him.

Delighted to be in the dynamic city of Surat where multiple development works are being dedicated. https://t.co/fRw6ptmsAq

PM Modi will inaugurate or lay foundation stones for various projects worth Rs 29,000 crore during the two-day visit to his home state, where the Assembly elections are due in December this year.

After landing at the Surat airport in the morning, Modi led a 2.5 kilometre roadshow from Ghodadara to Limbayat area of the city.

The prime minister, while sitting inside his car, waved to people who were standing on both sides of the road since early morning to greet him.

Gujarat is slated for the Assembly elections later this year and the ruling Bharatiya Janata Party (BJP) is making all out efforts to retain power in the state.

From Surat, PM Modi will go to Bhavnagar to launch various projects, including the stone laying of the world's first CNG terminal and a brownfield port in Bhavnagar, a state government release said.

Before addressing a gathering in the Jawahar Chowk area of Bhavnagar city, the PM is also scheduled to lead a two-kilometre-long road show in the city, the release said.