Modi took a dip in the Ganga and worshipped the river, then washed the feet of two female and three male sweepers before wiping their feet with towels 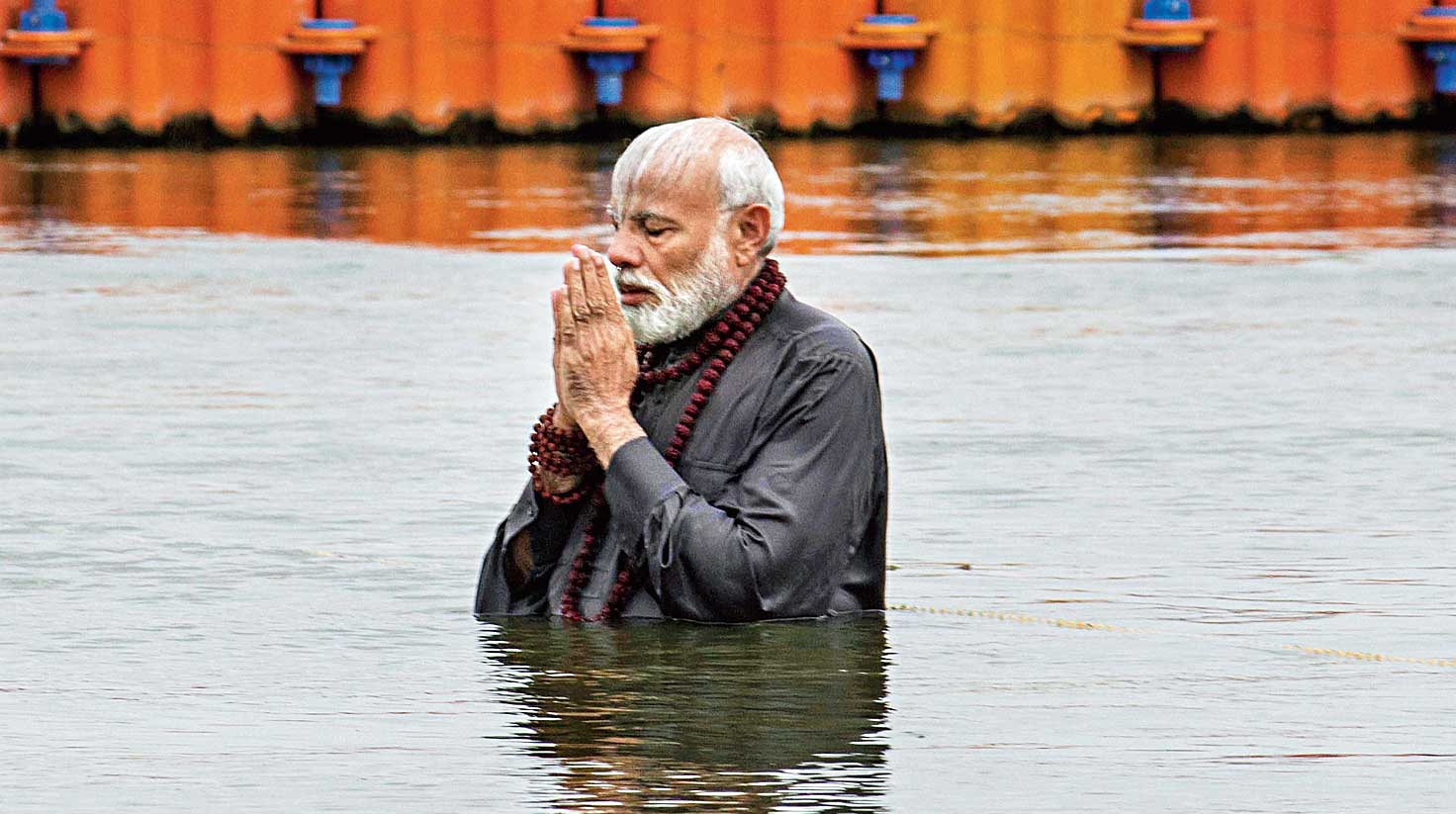 Prime Minister Narendra Modi takes a holy dip at the Sangam during the Ardh Kumbh Mela in Allahabad on Sunday. Modi later washed the feet of five persons employed as sweepers by the Allahabad municipality and said the moment would remain with him.
(PTI picture)
Piyush Srivastava   |   Lucknow   |   Published 24.02.19, 09:08 PM

Prime Minister Narendra Modi on Sunday washed the feet of five persons employed as sweepers by the Allahabad municipality and claimed the moment would remain with him, reaching out to a caste that accounts for a fifth of the Dalit votes in the heartland.

The pre-election gesture — that preceded a reachout to another socially disadvantaged community, the boatmen of the Sangam — came in the Ardh Kumbh Area along the confluence of the Ganga and the Yamuna.

BJP leaders claimed there was no politics in Modi’s latest act but the Valmiki community, most of whom are sweepers, and the boatmen who come under the Other Backward Classes form a substantial chunk of voters in Uttar Pradesh, which sends 80 MPs to the Lok Sabha.

His homage to the socially disadvantaged also comes at a time the Bahujan Samaj Party and the Samajwadi Party have formalised a tie-up for the upcoming parliamentary elections in a Dalit-OBC caste-based consolidation that could hurt the BJP.

Modi took a dip in the Ganga and worshipped the river, then washed the feet of two female and three male sweepers before wiping their feet with towels.

Modi gifted the five shawls and said he had instituted a fund for the sweeper community and they could benefit from it whenever in need but did not elaborate.

The Valmikis, who account for over 20 per cent of the 21 per cent Dalit voters in Uttar Pradesh, were initially Congress supporters but switched loyalties to other parties after the Congress’s fortunes declined.

The Prime Minister praised the sweeper community for keeping the Sangam area clean during the Ardh Kumbh Mela.

Sandal paste on his forehead and wearing a saffron kurta and jacket, Modi next honoured the boatmen of the Sangam.

The boatmen belong to the Mallah or Kewat castes within the OBC category and are considered political active.

“The Ramayan of Ram is incomplete without the boatmen,” the Prime Minister said, alluding to the boatman in the epic who had taken the exiled Ram, Sita and Lakshman to the other side of the Ganga.

Modi used to seek votes in the run-up to the 2014 Lok Sabha elections by saying that people should make him Pradhan Sewak, not Pradhan Mantri (Prime Minister).

Earlier, in Gorakhpur, Modi had transferred the first instalment of Rs 2,000 to bank accounts of farmers under the Pradhan Mantri Kisan Samman Nidhi scheme — a yearly cash-support that small and marginal farmers will get in three tranches.

“Now they (Opposition leaders) are spreading false rumours that Modi will take back Rs 6,000 given to the farmers when he returns to power. They are born liars. I want to tell you that it is your right and neither Modi nor any state government can take that money back from you,” Modi said, claiming he had not been able to implement the scheme in states not ruled by the BJP because governments there were not submitting lists of beneficiaries.

Earlier, interacting with farmers across the country through videoconference, Modi told a woman who also runs self-help groups in Bengal’s South 24-Paragans to mount pressure on the Mamata Banerjee government to submit a list of small and marginal farmers.

“The Bengal government should give us the list soon. You mount pressure on the government so that the farmers of Bengal are not deprived of the scheme,” Modi told the woman.