Both make harsh remarks against Congress, but won't contest in Sonia's Rae Bareli and Rahul's Amethi 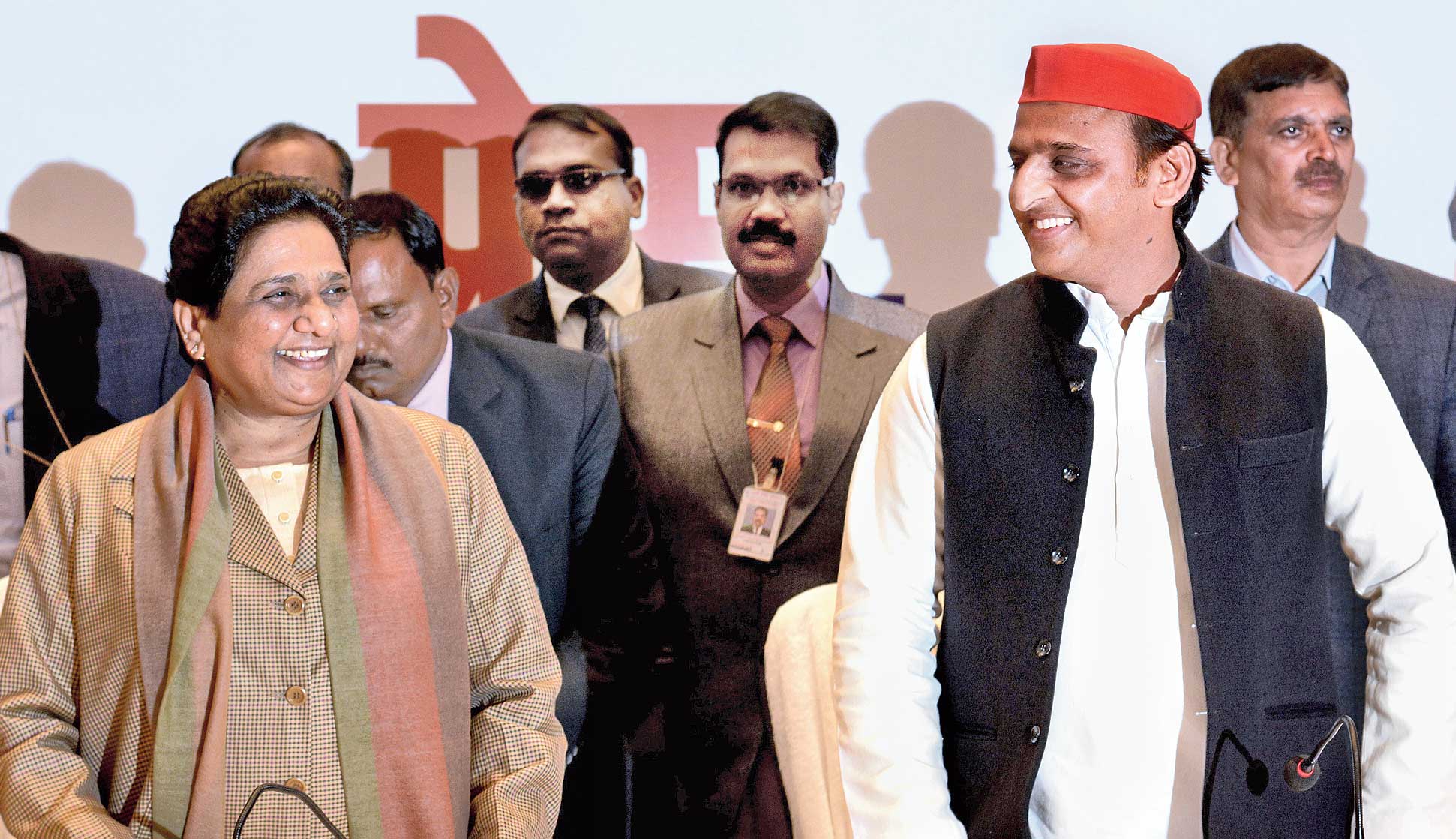 Mayawati and Akhilesh Yadav made their alliance official on Saturday, saying the Bahujan Samaj Party and the Samajwadi Party would contest 38 seats each in this year’s general election.

While both made harsh remarks against the Congress, they decided not to field candidates from Rae Bareli and Amethi, the constituencies of Sonia Gandhi and Rahul Gandhi, in a goodwill gesture to a party they support in Madhya Pradesh and Rajasthan.

The two remaining seats out of Uttar Pradesh’s 80 Lok Sabha constituencies will be given to possible but yet unnamed allies.

Akhilesh said the “long-term agreement” would endure during the 2022 Assembly elections too.

Both, however, acknowledged they had not yet finalised which party gets which seats — an issue that insiders in both parties suggested could prove tricky.

Akhilesh skirted the question whether he would accept Mayawati as Prime Minister if the alliance emerged the largest group after the general election.

“You know well who I would support for Prime Minister,” he answered.

A smile had appeared on Mayawati’s face when the question was put to Akhilesh, sitting on her left, but it faded as he replied. Quickly recovering herself, however, the BSP chief laughed loudly.

Akhilesh has in recent weeks been urging party members to work towards making his father Mulayam Singh Yadav the Prime Minister. Mayawati has for the past one year been telling her party to strive harder so that she can become Prime Minister in case of a hung Parliament.

Saturday’s deal implies that Ajit Singh’s Rashtriya Lok Dal, which has the support of the Jats of western Uttar Pradesh and wanted six seats, wouldn’t be part of the alliance. Samajwadi and BSP sources, however, would not rule out their parties scaling down their shares later to accommodate Ajit.

Explaining why the Congress wasn’t part of the alliance, Mayawati dubbed the party “as bad as the BJP”.

“Both are anti-people. The only difference is that the Emergency imposed by the Congress in 1975 could be seen while the BJP’s ‘Emergency’ is invisible,” she said. “The other reason is that instead of voting for us, its (Congress) supporters vote for the BJP.”

Akhilesh too said the Congress had in 2005 “misused” the CBI in a wealth case against then chief minister Mulayam, himself and other family members.

“Prime Minister Narendra Modi and BJP president Amit Shah — teacher and disciple —will lose their sleep after learning that the SP and the BSP are ready to contest together,” Mayawati said.

She cited how an alliance between the BSP and the Samajwadis — then led by her mentor Kanshi Ram and Mulayam, respectively — had stopped the BJP in the 1993 Assembly elections.

Mayawati, however, also twice mentioned the infamous Lucknow state guesthouse incident of June 1995 that turned the BSP and the Samajwadis into sworn enemies for two decades.

Samajwadi cadres had attacked Mayawati at the guesthouse after she had withdrawn support to Mulayam’s government — “because of some very unpleasant reasons”, she explained on Saturday.

“But I have forgotten that incident in the larger interest of the country and for the cause of ousting the communal BJP.”

Akhilesh cited how, in July 2016, then state BJP vice-president Dayashankar Singh had publicly used abusive words towards Mayawati but his party had still fielded his wife Swati in the 2017 Assembly elections and later made her a minister.

“That day I decided to strengthen Mayawatiji in her fight against the BJP,” he said. Dayashankar, suspended for a while, was later reinstated.

“BJP leaders must remember that any insult to Mayawatiji would henceforth be an insult to me, and we won’t spare them for any such crime,” Akhilesh said.

Mayawati slammed the Modi government for the demonetisation and its faulty implementation of the goods and services tax.