Prime Minister in his departure statement, had said that his visit would be an opportunity to hold detailed bilateral discussions with Chancellor Scholz 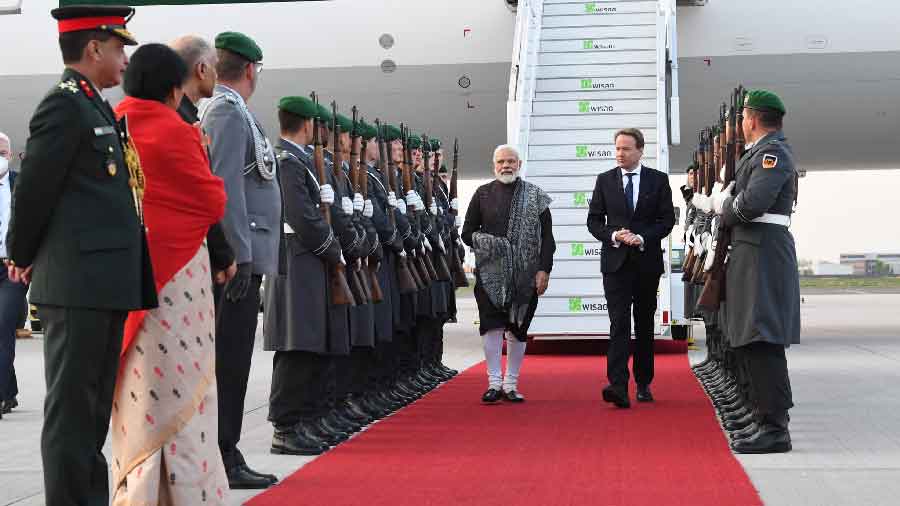 Prime Minister Narendra Modi arrived here on Monday on the first leg of his three-nation Europe trip during which he will hold detailed bilateral discussions with German Chancellor Olaf Scholz and co-chair the India-Germany inter-governmental consultations as the two nations seek to further deepen their ties.

Landed in Berlin. Today, I will be holding talks with Chancellor @OlafScholz, interacting with business leaders and addressing a community programme. I am confident this visit will boost the friendship between India and Germany, Modi tweeted in English and German soon after his arrival here.

"It was early morning in Berlin yet several people from the Indian community came by. Was wonderful connecting with them. India is proud of the accomplishments of our diaspora," Modi said in another tweet.

Landed in Berlin. Today, I will be holding talks with Chancellor @OlafScholz, interacting with business leaders and addressing a community programme. I am confident this visit will boost the friendship between India and Germany. pic.twitter.com/qTNgl8QL7K

This would be Prime Minister Modi's first meeting with Olaf as German Chancellor, who assumed office in December, 2021.

Launched in 2011, IGC is a unique biennial mechanism which allows the two governments to coordinate on a wide spectrum of bilateral issues. Many ministers from both sides will participate in the IGC.

The 6th IGC will further strengthen the India-Germany strategic partnership, it said.

In his departure statement, Modi had said that his visit to Berlin will be an opportunity to hold detailed bilateral discussions with Chancellor Scholz, whom he met at G20 last year in his previous capacity as Vice-Chancellor and Finance Minister.

"We will co-chair the 6th India-Germany Inter-Governmental Consultations (IGC), a unique biennial format which India conducts only with Germany," he said.

"I see this IGC as an early engagement with the new government in Germany, within six months of its formation, which will be helpful to identify our priorities for the medium and long term," he added.

In 2021, India and Germany commemorated 70 years of the establishment of diplomatic relations and have been strategic partners since 2000, Modi said.

"I look forward to exchanging views with Chancellor Scholz on strategic, regional and global developments that concern us both," the Prime Minister said.

The two leaders will also address a high-level roundtable where they will interact with top CEOs of both countries.

"The long-standing commercial ties between India and Germany form one of the pillars of our Strategic Partnership, and Chancellor Scholz and I will also jointly address a Business Roundtable with the goal of energising our industry to industry cooperation, which will help strengthen the post-Covid economic recovery in both countries," Modi said.

The roundtable will further cement our close business-to-business ties, the MEA said.

Germany is India's largest trading partner in Europe with a bilateral trade of over USD 21 billion.

Modi is also scheduled to interact with the Indian diaspora in Germany.

"Continental Europe is home to over one million persons of Indian origin, and Germany has a significant proportion of this Diaspora. The Indian Diaspora is an important anchor in our relations with Europe and therefore I will take the opportunity of my visit to the continent to meet our brothers and sisters there," the Prime Minister had said.

Germany is home to a thriving Indian diaspora of over 200 thousand.

The visit will chart the future course for deepening Indo-German ties, the MEA said.

From Berlin, Modi will travel to Copenhagen on May 3 where he will have a bilateral meeting with Prime Minister Frederiksen during which the two leaders would review the progress in India's unique Green Strategic Partnership' with Denmark, as well as other aspects of bilateral relations.

He will also participate in the India-Denmark Business Roundtable as well as interact with the Indian community in Denmark.

On May 4, Modi during a brief stopover in Paris will hold talks with French President Emmanuel Macron, who was re-elected as French president.

Government sources have said that in his first visit abroad this year, Prime Minister Modi will have 25 hectic engagements in his three-day trip to as many countries where he will be spending around 65 hours.