The parties have pledged to uphold the Gupkar Declaration, passed last year by them to protect and defend the identity, autonomy and special status of Jammu and Kashmir 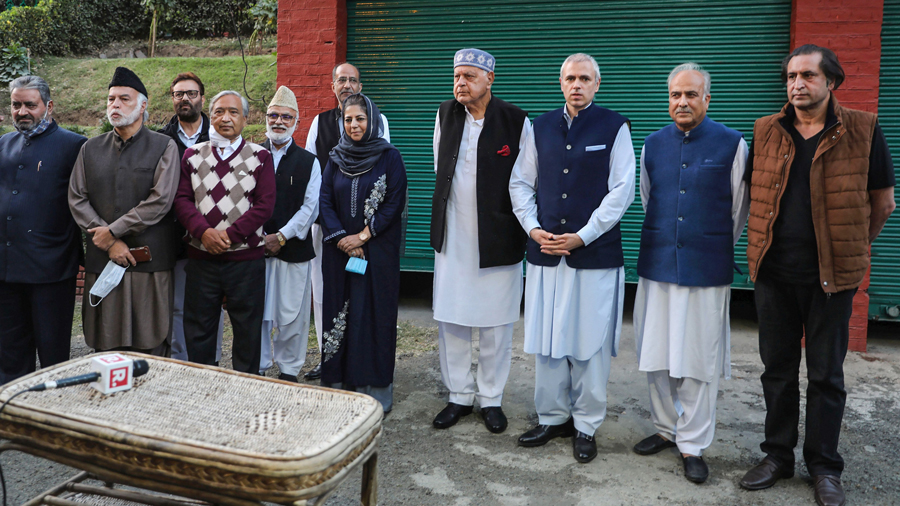 A “People’s Alliance” involving all major pro-India political forces took shape in the Valley on Thursday to fight for the restoration of Jammu and Kashmir’s special status and the resolution of the larger Kashmir issue.

The formation of the political umbrella involving the National Conference, People’s Democratic Party, People’s Conference, the CPM and other outfits is expected to pose a new headache for the BJP-led Centre, which scrapped Jammu and Kashmir’s special status and bifurcated it into two Union Territories on August 5 last year and went on to crush all dissent through an unprecedented clampdown and communications blockade.

With the new political axis also calling for a resolution of the Kashmir issue, so far the preserve of separatists, it also showed how last year’s decisions had turned champions of the pro-Indian cause into potential adversaries.

The alliance is a worrying development for New Delhi also because it has emerged at a time the country is battling an aggressive Chinese army on the Ladakh frontier. China accuses India of “unilaterally” creating the Union Territory of Ladakh, and the August 5 moves are seen as the main reason behind the Chinese offensive.

The parties have pledged to uphold the Gupkar Declaration, passed last year by them to protect and defend the identity, autonomy and special status of Jammu and Kashmir.

The government, however, went ahead with the cancellation of Article 370 and the bifurcation.

On Thursday, Kashmir witnessed its first large-scale political meeting since August 5, 2019. It was also the first time in decades that major political parties from the pro-India camp had closed ranks to fight for the resolution of the Kashmir issue.

“We feel the political issue of the state has to be resolved as quickly as possible and that can only be done through dialogue by peaceful means with all the stakeholders who are involved in the problem of Jammu and Kashmir,” former chief minister Farooq Abdullah told reporters after the meeting.

Farooq, who is the NC president and Srinagar MP, appeared to be referring to India, Pakistan and Kashmiris when he spoke of stakeholders.

He was flanked by his son and former chief minister Omar Abdullah, Mehbooba, Sajad Lone of the People’s Conference, the CPM’s Mohammad Yousuf Tarigami and other leaders. The Congress, which was part of the Gupkar Declaration, did not turn up for the meeting.

Farooq said theirs was a constitutional battle and they wanted the government of India to return to the people of Jammu and Kashmir the rights they enjoyed before August 5 last year.

“All the rights snatched from us should be returned. (Also) Kashmir’s political issue is awaiting a solution for a long time. We want steps to be taken to ensure its immediate resolution,” he said.

A leader privy to the conversations at the meeting said: “We want a structural response to last year’s assault on our identity. They (Centre) have humiliated the people of Jammu and Kashmir, particularly those who stood by the idea of India, by taking away our identity, dividing our state into two units and reducing them to Union Territories.”

“Their next plan is to change the demography of our state but we will oppose the designs tooth and nail,” he added.

With the separatist leadership in jail or under house arrest, the leaders of the pro-India camp are expected to take their battle to the streets, which might end up restoring their own credibility after appearing for months to have caved in under government pressure.

As the leaders were busy with the meeting at Farooq’s residence, anger was writ large on faces of ordinary Kashmiris passing by.

Many on motorcycles and cars swore under their breath at the leaders. Kashmiris in general have accused the leaders of strengthening India’s cause in Kashmir by betraying the dominant azadi struggle.

The two-hour meeting at Farooq’s Gupkar residence also saw Mehbooba stepping out of her residence for the first time after her release. She first went to her father Mufti Mohammad Sayeed’s grave at Anantnag’s Bijebehara.

The PDP president had been scheduled to address on Friday her first media conference after her release but it was postponed in view of Thursday’s meeting.
Farooq said the leaders would meet again to chalk out the course of action.

Kashmir politics back on feet