Advertisement
Home / India / Over 97 per cent of schoolteachers vaccinated against Covid-19: Centre

Over 97 per cent of schoolteachers vaccinated against Covid-19: Centre 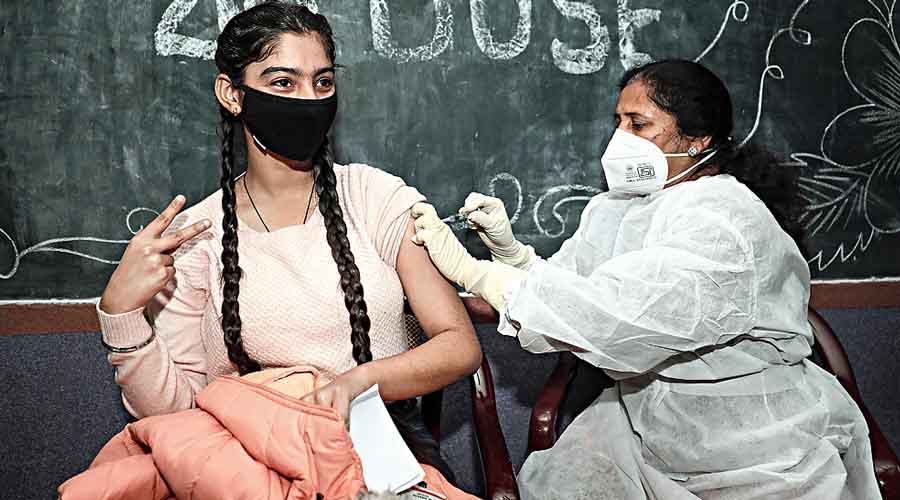 Over 97 per cent of schoolteachers nationwide are vaccinated against Covid-19, the Centre said on Thursday, asking states to decide when to reopen schools and whether schools require parental consent for students to attend in-person classes.

While schools remain closed in nine states and are partially open in 16, senior officials from the Union health and education ministries said states could decide when to open schools, including activities such as games, dance and music, with precautions.

The officials cited high vaccination rates among teachers and non-teaching staff and signals of a shrinking epidemic in many states but said reopenings and any gatherings should be done under physical distancing rules and Covid-19 protocols.

“State governments may decide whether schools are required to take consent of parents of students to attend physical classes — this is a major difference,” an education ministry official said.

The Centre’s earlier advisory had required schools to take consent from parents.

“The nation is concerned that there has been a significant learning loss,” said Vinod Paul, a paediatrician and member (health) at Niti Aayog, the government’s top think tank. “At the earliest opportune, appropriate time, the schools should open — but under standard (precautionary) protocols.”

While many schools across India have continued to offer classes online through the epidemic, the prolonged school closures had raised concerns about the mental health impacts on children and inequity in access to the online classes.

A 15-state survey by economists Reetika Khera and Jean Dreze in August 2021 had suggested that only 24 per cent of urban children and 8 per cent of rural children were studying online regularly.

The officials did not say whether these numbers represent the fully vaccinated, but the Centre and states have for several months urged local health authorities to prioritise vaccinations for teaching and non-teaching staff.

Health officials also said 65 per cent of children between 15 and 18 years had already received first doses of Covid-19 vaccines.

Educational institutions across India had shut down under the 2020 lockdown and schools have since then opened, closed, or opened only partially for children in senior classes in different states.

The advisory to states on schools comes at a time when 34 states are showing declines in their counts of daily new infections and positivity rates. The cases continue to rise in Kerala and Mizoram, an official said. The nationwide count of new infections has fallen over the past two weeks from over 347,000 to 172,000 on Wednesday.