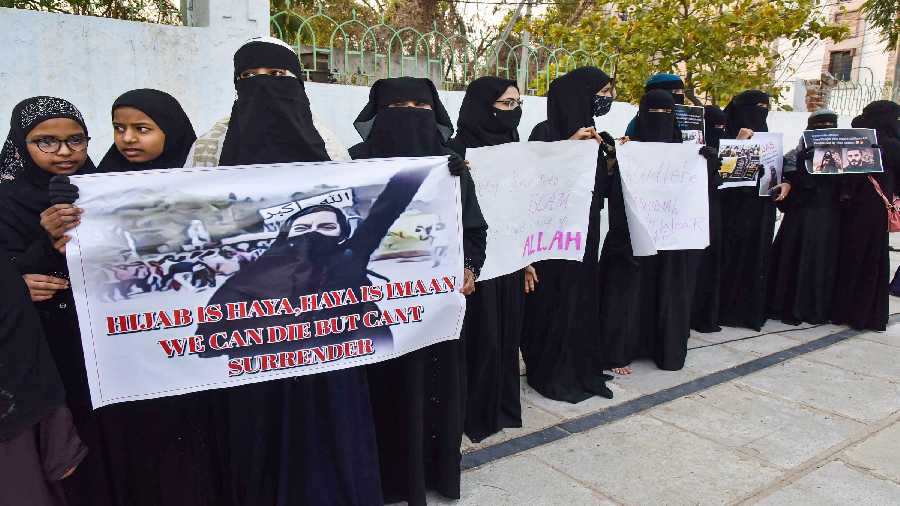 Over 700 law professionals and students have written an open letter condemning the public humiliation of Muslim women who are disallowed to enter educational institutions in Karnataka over the hijab controversy and pointing out that Hindu students wearing their religious markers never faced such a hurdle.

“Students who profess the Hindu faith wear different markers of their faith to school every day, including bindi, tilak, vibuthi. However, these markers have never evoked
a reaction similar to what we see against Muslim students today,” said the signatories.

They expressed concern at last week’s interim order of Karnataka High Court that restrained students from wearing religious clothing, including the hijab and the saffron scarf, to educational institutes.

“We are deeply concerned with and strongly condemn the violation of constitutional rights of young Muslim women who have been denied entry into educational spaces due to their wearing a hijab. We are equally concerned by the interim order of the Hon’ble Karnataka High Court restraining ‘students regardless of their religion or faith from wearing saffron shawls (bhagwa), scarves, hijab, religious flags or the like within the classroom’,” the signatories noted.

“Post the interim order, we are witness to the public humiliation of Muslim students and staff, who are being forced to remove their hijab before entering schools and colleges, purportedly on instructions of the district administrations. This disrobing of Muslim girls and women in public view is inhuman, derogatory and an affront to the Constitution and amounts to the public humiliation of the entire community. We hang our heads in shame as having failed in protecting their basic right to life with dignity,” they stated.

The signatories wrote: “We urge Karnataka High Court to take judicial notice of the public humiliation of Muslim students and staff and immediately pass necessary orders prohibiting any such derogatory practice.”

The signatories contended that the current attack on the Muslim women’s rights “is not a novel or an isolated incident, but must be acknowledged to be part of the communal polarisation in Karnataka and across the country, with members of minority communities being attacked through lynching, hate speech, witch hunts and mob attacks”.

They noted that the “fundamental right to education is a well-established aspect of the Right to Life under Article 21 of the Constitution”.

“The effect of such a decision is the pushing of Muslim women out of education, and an exacerbation of the crisis of education in our country. The denial of education to women on grounds only of wearing the hijab is not a reasonable or proportionate restriction of their rights. The imposition of an absolute uniformity contrary to the autonomy, privacy and dignity of Muslim women is unconstitutional. By virtue of this, women have the right to choose to wear hijab, and equally, to choose against the imposition of hijab,” the letter added.