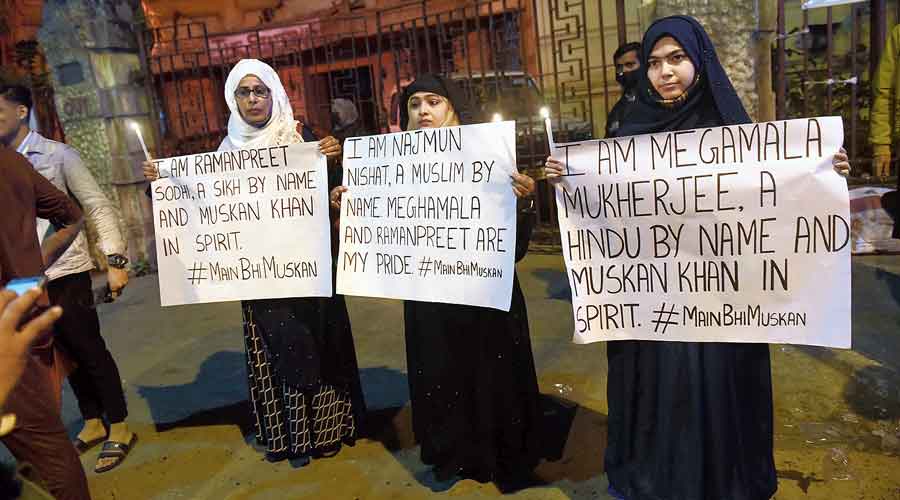 Three Calcuttans, Ramanpreet Sodhi, Najmun Nishat and Meghamala Mukherjee, at a candlelight vigil at Esplanade to protest the heckling of Muskan, a college student, in Karnataka earlier this week. The three Calcuttans said they were all “Muskan Khan in spirit”.
Bishwarup Dutta
K.M. Rakesh   |   Bangalore   |   Published 12.02.22, 03:01 AM

The girl students resisting an Udupi college’s ban on the hijab in classrooms have received unwanted calls and messages after their phone numbers were leaked on social media, their parents have said.

The parents met Udupi superintendent of police N. Vishnuvardhan on Thursday and gave him a written complaint seeking action against those who leaked the numbers or made the unwanted calls. They said they feared for their daughters’ safety.

Since the Government Pre-university College banned the hijab in late December last year, eight Muslim girl students have been coming to the campus and spending the hours in the corridors, refusing to take off the hijab to be allowed entry to classrooms.

Vishnuvardhan told reporters the complainants had been asked to provide whatever phone numbers and messages they could to help launch an investigation. “We will take action once we receive evidence,” the officer said.

Sources close to the parents said the families believe the phone numbers were leaked on WhatsApp but don’t know who the perpetrators are. The girls have either switched off their phones or barred incoming calls.

None of the parents could be reached for comments, with local sources saying the families were apprehensive even of answering calls.

The matter has escalated into a state-wide controversy with several other colleges too banning the hijab. Mobs sporting saffron scarves and chanting “Jai Shri Ram” have been gathering before colleges to heckle hijab-wearing girls and demand that all educational institutions ban the veil and the burqa.

Street protests against the hijab ban too have been held in various parts of the state, many organised by the Campus Front of India (CFI), students’ wing of the Muslim outfit Popular Front of India.

Udupi MLA Ragupathy Bhat of the BJP on Friday said he had written to state home minister Araga Jnanendra seeking a probe by the National Investigation Agency (NIA) into the “international conspiracy” behind the pro-hijab protests.

Bhat accused the CFI of fomenting trouble on the issue.

Anti-ban students have underlined that their elder sisters, aunts and mothers had worn the hijab to classrooms during their college days.

They say that Bhat, chairman of the development committees of all the colleges in his constituency, had helmed the meetings at the Government Pre-university College that decided to ban the hijab.

State home minister Jnanendra told reporters in Bangalore that the police were already investigating the conspiracy angle behind the anti-ban protests. “I shall reveal everything later,” he said.

State CFI president Ataullah Punjalakatte said the initial anti-ban protests were held by the affected students themselves, and his organisation joined in later.

“Before we came into the picture, they (students) had already taken up the matter with their parents. We are only trying to help everyone secure their constitutional rights,” he said.