'What we decided at Udaipur, we expect that commitment to be maintained' 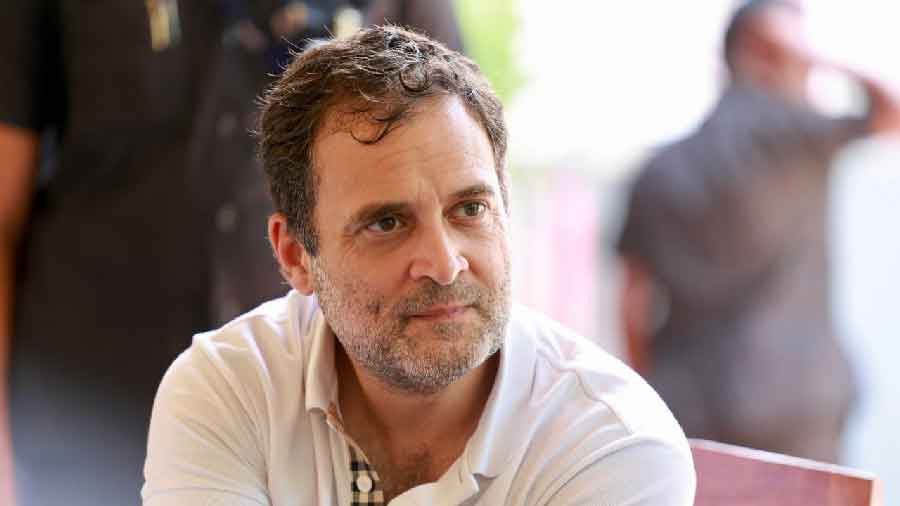 As the Congress prepares for a likely contest to the party's top post after decades, Rahul Gandhi on Thursday batted for the "one-man, one-post" concept in lines with the Chintan Shivir reforms and indicated he may not run for the party president's post.

Gandhi's statement comes amid speculations that Rajasthan Chief Minister Ashok Gehlot and Thiruvananthapuram MP Shashi Tharoor might throw their hats into the ring and on a day the party issued notification for the AICC presidential polls.

Gandhi, also the MP from Wayanad in Kerala, declined to answer queries on whether he would contest in the presidential polls by saying "I have made my position clear (on that) in the last press conference. I have repeated it several times."

Earlier this month, Gandhi had said he has made his decision on whether he will take up party presidency but did not divulge his plans, asserting he will give his reasons if he does not contest the elections for the post.

Gandhi's remarks were seen by many in the party as an indication that he may stick to his earlier stance of not taking up the party chief's post.

On Thursday, Gandhi said that questions on whether he would contest in the party's presidential poll was "aimed at distracting me from the yatra". He has embarked on the 3,500 km Kanyakumari-Kashmir 'Bharat Jodo Yatra'.

Following the three-day Udaipur brainstorming session in May, the5 'Chintan Shivir,' the party proposed a number of reforms, including limiting one post to one person.

Gandhi's remark assumes significance as Gehlot, seen as a front runner in the party presidential poll, would reportedly seek to retain his chief ministerial post if he become the Congress president.

Gehlot arrived in Kerala amidst speculation as to who all would be contesting the party's presidential polls. He is likely to press Gandhi to take up the party reins.

Responding to queries during a press conference held between the first and second leg of the day's Bharat Jodo Yatra on Thursday, Gandhi said the Congress president was not just an organisational position but that it was an ideological post and a belief system.

On being asked what would be his advise to the presidential post candidates, Gandhi said, "My advise would be that you are taking on a position which is a historic position and it is a position that defines and has defined a particular view of India."

On the nation-wide raids on the offices and other premises of the Popular Front of India (PFI), Gandhi said all forms of communalism should be combated.

When asked as to what would be his response to those criticising the yatra for spending very few days in Uttar Pradesh, Gandhi responded, "don't worry about that. We have a clear view on what needs to be done in UP."

He also said that the yatra was from one end of the country to another and "frankly we cannot walk 10,000 km".

Regarding queries on what happened in Goa while the yatra was going on, on party MLAs joining the ruling BJP enmasse, Gandhi stated, "As I have said many times before, we are fighting a machine that has captured the institutional framework of this country."

On whether the yatra can maintain the same momentum in other states as it is doing in Kerala, he said that it does not matter which state you go to, effect of the yatra would be the same regardless of who is running the state.

When asked about his position regarding the Left government in Kerala, Gandhi said the evaluation of the LDF dispensation in the southern state would be better done by the Congress leaders here.

However, he also said, "As far as the Left front goes, I have an ideological disagreement with them. I have issues with how they view politics and Kerala."

He further said that people walking with the yatra are telling what they think about the Left government.

"A lot of Left workers are coming and shaking hands with me. They appreciate the idea of what we are doing," he added.

At the same time he also said that while it is difficult for senior leaders of the Left front to support what the Congress was doing due to the "political combat" between them, "they know in their hearts that the point I am raising is correct".

On queries regarding a unified opposition against the BJP, Gandhi said it was very important for all opposition parties to come together as it "was required to fight the ideology and financial power and the institutional power" of the saffron party and the RSS.

"So I think it is very important that opposition has a discussion and comes out with a strategy," he said.