Old grouse against lawyers bursts out in Delhi police protest

In a first, hundreds of police officers demonstrated outside their headquarters 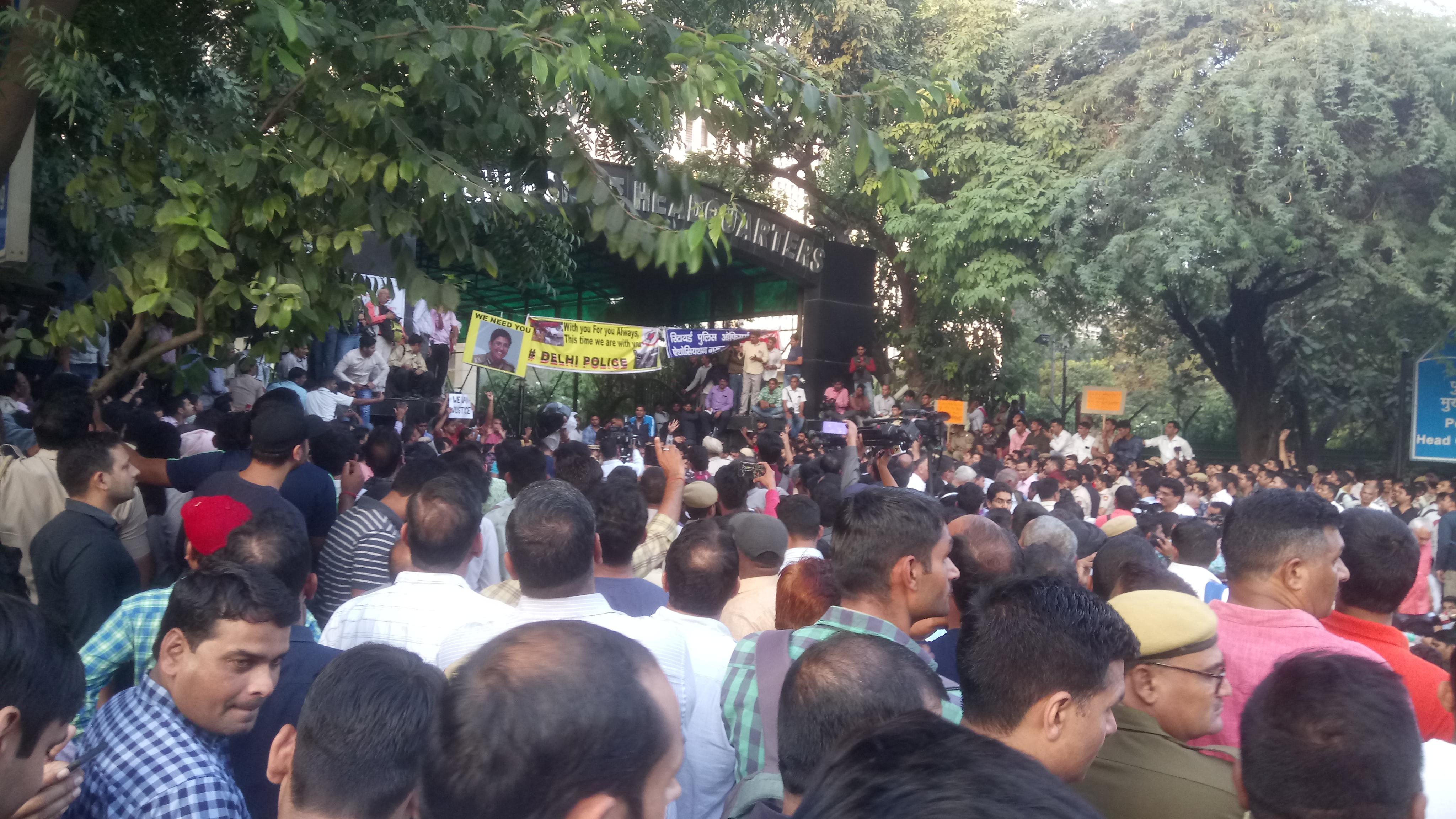 The protest was staged over separate incidents of violence against police force by lawyers at Tis Hazari Court and Saket district court in last three days
The Telegraph
The Telegraph   |   New Delhi   |   Published 05.11.19, 05:25 PM

The situation in Delhi is quite alarming where you can see Police themselves protesting. Law and order has gone for a toss. #WhereisAmitShah https://t.co/SUBHESQ1UK

In an unprecedented show of anguish, hundreds of police officers protested outside their Delhi headquarters, shouting for “justice” and chanting for former top cop Kiran Bedi, who once supposedly stood behind the force during a similar confrontation between lawyers and law enforcers.

The policemen demanded action against the lawyers who roughed up several police officers in the Tis Hazari courts on Saturday and later at Saket district court on Monday.

Last Saturday at the Tis Hazari, scores of lawyers and police officers came to blows resulting in many getting injured. The incident was sparked by a petty row over parking space between a police officer and a lawyer in the court complex.

The grouse against lawyers is an old one and it was clear from the statements of some of the policemen.

The cops complained against the heckling of lawyers in court who, they said, would not think twice before abusing a judge or beating up a complainant.

“The lawyers have a strong bond. Even the judges are afraid. I have seen incidents when lawyers have abused a judge inside the court and even gone charging at him,” one of the protesters, a constable appointed at Dwarka district court, told this website.

“We cannot even lodge an FIR against them. The moment someone comes with a complaint against any of the lawyers, a pack of usually 50-odd lawyer barges in and force him to settle for a compromise either by threat or by use of force,” the cop, who did not wish to be named, said.

After the Tis Hazari incident, Delhi High Court issued orders for the transfer of special commissioner Sanjay Singh and additional deputy commissioner of police Harender Singh. Also, the court put restrictions on the police on taking any “coercive action” against the lawyers involved violence.

While the police officers staged their protest crowding one entire lane of busy Vikas Marg, on social media Union Home Minister Amit Shah's silence became a point of ridicule. #WhereIsAmitShah trended the entire day on Twitter and many took pot-shots at the minister.

In 1988 Kiran Bedi, then the DCP (north), arrested a lawyer for theft.

All hell broke loose when the lawyer was handcuffed, a practice which the lawyers’ body argued did not apply to them. A long-drawn confrontation ensued between the police and the lawyers, who went on a nationwide strike. Bedi ultimately was transferred after a two-judge bench ordered for it but did not back down on the arrest.

While Police and Lawyers are baying for each others blood, Amit Shah has been busy getting his Shehzada's Twitter account verified.#WhereIsAmitShah pic.twitter.com/TXbYjJ7BYL

Those who break the law, cannot keep law and order. Delhi is living proof of that. Tumse na ho payega... #whereisAmitShah