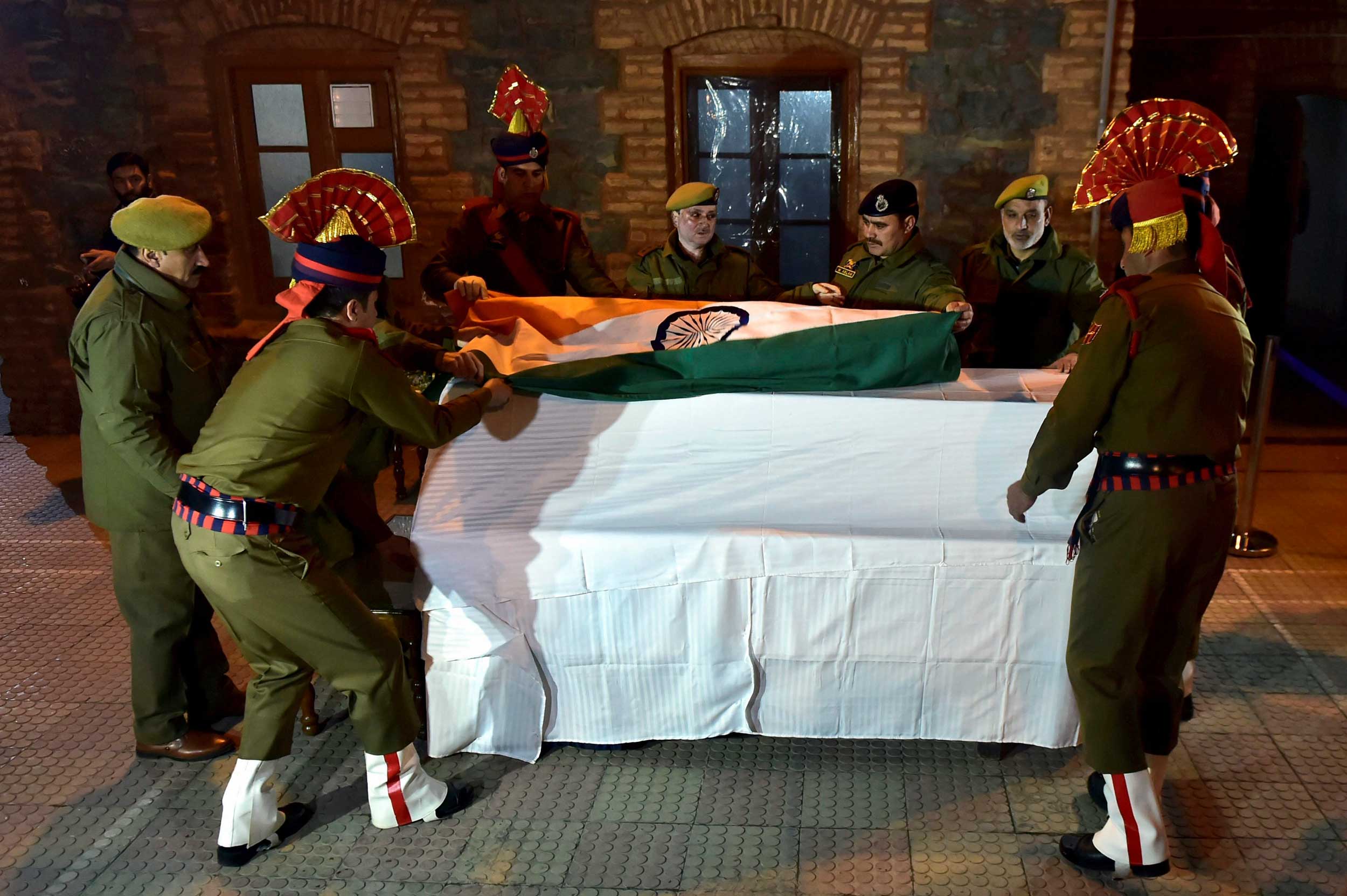 Policemen wrapping the coffin of Aman Kumar Thakur with the Indian Tricolour at the wreath laying ceremony at Trigam Village of Kulgam, in Srinagar, on Sunday.
(PTI)
Our Special Correspondent And PTI   |   Srinagar   |   Published 24.02.19, 09:00 PM

A young deputy superintendent of police who had given up two comfortable desk jobs and focused on counter-insurgency operations was killed on Sunday in a gunfight with a Jaish-e-Mohammad squad in south Kashmir.

An army jawan also died in the encounter in which three Jaish militants were killed. Two soldiers, including a major, were injured.

The gunfight broke out in Turigam village of Kulgam district, some 65km from Srinagar, after security forces cordoned off the area to hunt down the militants.

Aman Kumar Thakur, who was leading the counter-insurgency Special Operations Group of police, died in the gunfight. A 2011 batch Kashmir Police Service officer, Thakur was in his late thirties.

Sources said Thakur suffered a gunshot injury in his head and died while he was being evacuated to hospital.

A defence spokesperson in Srinagar confirmed the death of an army jawan.

Security forces have lost 47 men, including two army majors, in attacks in the state in the past fortnight. The forces have killed six Jaish militants since the Pulwama attack in two operations.

Thakur, a resident of Jammu’s Doda district, was DSP operations for Kulgam district and had participated in several successful operations against militants in the area.

Thakur, a post-graduate in zoology, had first got a job in the social welfare department and was later appointed as lecturer in a government college. He wanted to be in the police force and had a passion for wearing the uniform, one of his close friends in the police said.

Director-general of police Dilbagh Singh could not hold back his emotions while recalling his various meetings with the young police officer. “He was always beaming with enthusiasm and used to lead his team from the front,” Singh said.

During his tenure in the militancy-infested Kulgam district, Thakur had won laurels from many quarters.

“He had been heading the counter-terrorism wing of Jammu and Kashmir police in Kulgam and had played an instrumental role in killing dreaded terrorists in the area,” Singh said.

Thakur’s friends recalled his simplicity, plain-speaking and thorough professionalism. “He was known for his determination and valour. In a short period of time, he had earned love, respect and appreciation of the locals in the area for his helpful nature and professionalism,” a police officer said.

Thakur was awarded the DGP’s medal and commendation recently for his outstanding contribution. He was also awarded Sher-e-Kashmir Medal for Gallantry in recognition of his bravery and courage in anti-militancy operations.