In the restructured syndicate, there will be adequate representation of the chancellor and the state government 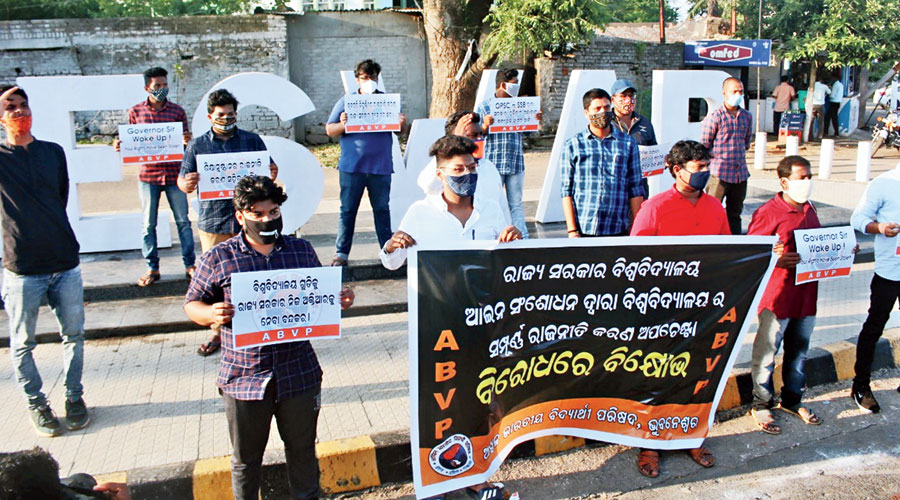 ABVP supporters at a rally in Bhubaneswar to protest against the decision to abolish the senate system in universities
Telegraph picture
Subhashish Mohanty   |   Bhubaneswar   |   Published 04.09.20, 06:02 AM

The Odisha cabinet presided by chief minister Naveen Patnaik on Wednesday decided to abolish the senate system of universities and let the government play a major role in the selection process of vice-chancellors of universities.

It has also taken away the power of the universities to appoint their staff.

However, the decision of the state government has triggered protests from the ABVP, a right wing all India student organisation which on Thursday organised a rally here demanding that the government should refrain from infringing on the rights of the universities.

Chief secretary Asit Kumar Tripathy on Wednesday said: “Though senate is the highest authority of a university over the years it has become dysfunctional. Therefore, the concept of senate shall be done away with. It is found that the senate has become more an ornamental body with the real authority being exercised by syndicate. It is therefore decided to do away with the concept of senate and restructure syndicate for smooth academic and administrative functioning of the universities.”

Senate is a body comprising various sections of the society, students, teachers and mostly from educational background which guide the universities on various issues but it has become dormant over the years. The syndicate is the executive body of the university and exercises general supervision over the affairs and management of the body.

The government has also decided to accord classical status to Odissi music. Culture minister Jyoti Panigrahi said: “The form of music is very ancient and is different from other form of classical music. The state will soon send a proposal to this effect to the Centre to give classical tag to Odissi music. Besides, we have also decided to take up a special project for the development of Suanoda village, the village of Gopabandhu Das (1877-1928).”

Das, popularly known as Utkalamni (jewel of Utkal or Odisha), was the modern maker of Odisha.

“The state should not interfere in the administration of the universities. It’s now trying to infringe on their autonomy which is dangerous for the education system,” said ABVP national executive member Sanjay Mallick.