Advertisement
Home / India / NRC not now, not ever: Mamata Banerjee

NRC not now, not ever: Mamata Banerjee

Before the meeting, she led a 3.5km anti-NRC march from Sinthee to Shyambazar 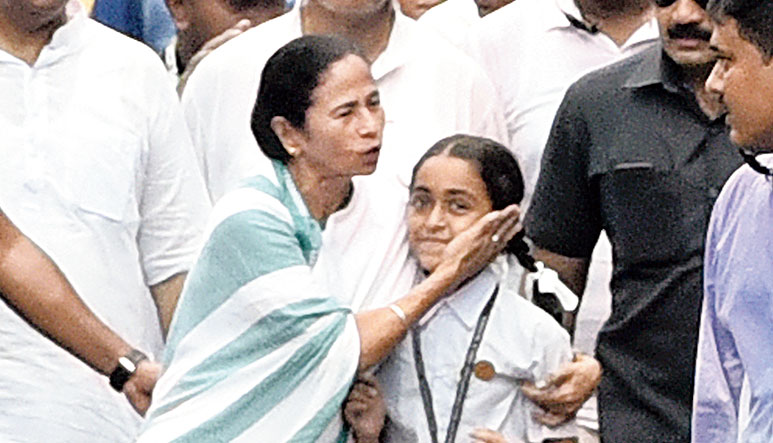 Mamata Banerjee on Thursday said the National Register of Citizens (NRC) would not be allowed in Bengal in her lifetime and asserted that after her, “four more generations” were ready to resist such “atrocities” in the state.

“We will never allow the NRC in Bengal. We do not accept the NRC in Assam. We will not accept it anywhere else in the country…. I warn them against playing with fire. They cannot enforce another Bengal Partition,” Mamata told a gathering of thousands at the culmination of a march at the Shyambazar crossing.

“I will fight this tooth and nail till the day I die. After me, four more generations stand ready to resist this and all such atrocities,” she added to thunderous applause.

Before the meeting, the Trinamul Congress chief led a 3.5km anti-NRC march from Sinthee to Shyambazar. Thousands stood along the roads.

BJP state president Dilip Ghosh later said his party was committed to the introduction of the NRC in Bengal and those opposing it would have the same fate as that of “illegal Muslim infiltrators”.

After the BJP won 18 of the 42 Lok Sabha seats in Bengal, several Trinamul leaders had said in private that Mamata’s belligerent opposition to the NRC had cost the party dear in some seats. Mamata has, however, shown no sign of backing down on the issue.

The final NRC in Assam has left the BJP squirming in discomfort amid a perception that 11 lakh Hindus and one lakh Gorkhas are among the 19 lakh excluded from the list.