The samples of parents and healthcare workers, who were symptomatic give relief to Kerala government 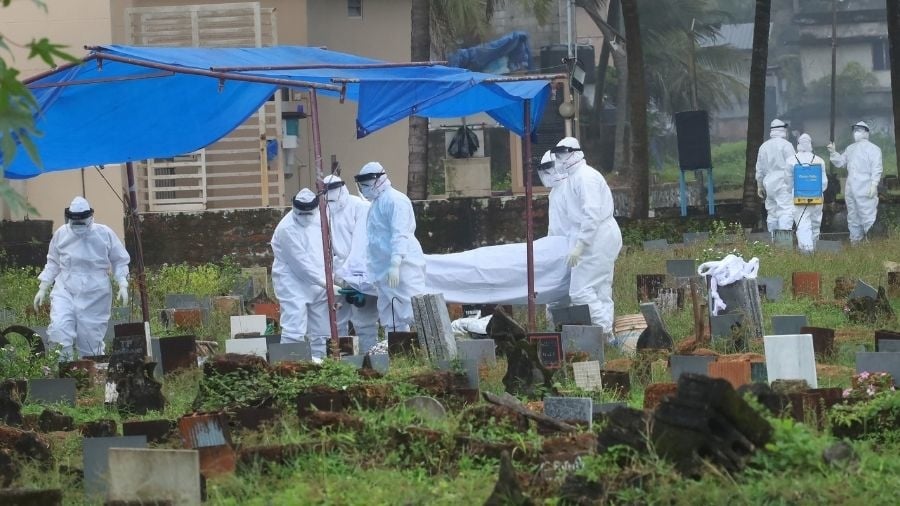 There are currently 48 people in the high risk category who are at a medical college isolation ward and their health condition is "stable".
File picture
Our Bureau, PTI   |   Kozhikode   |   Published 07.09.21, 09:50 AM

Kerala heaved a sigh of relief on Tuesday as the test results of those who came in close contact with the 12-year-old child who succumbed to Nipah virus infection returned negative.

"The samples of parents and healthcare workers, who were symptomatic, have been tested negative. It's a moment of relief that the results of those who were in close contact with the child came out negative," the minister said at a press meet.

George said there are currently 48 people in the high risk category who are at a medical college isolation ward and their health condition is "stable".

Five more samples are being tested in the facility arranged at the medical college by Pune NIV, the minister said.

Out of the 48, 31 people are from Kozhikode, four from Wayanad, eight from Malappuram, three from Kannur and one person each from Palakkad and Ernakulam districts.

The minister also informed the media that more samples will be tested on Tuesday.

Officials from the animal husbandry department and forest department launched a massive drive to identify the source of the infection that killed the boy who is suspected to have eaten rambutan fruit grown in the area.

Veterinary experts from the animal husbandry department collected swabs and blood samples from a goat from the child’s home since he had tended to the animal that had fallen sick recently. But deputy director of the department K.A. Baby told reporters that there was no precedence to a domestic animal testing for the virus.

“Samples of body fluids from domestic animals were collected just to rule out any possibility although we don’t have any evidence of them being the host for this virus,” Baby said.

He said work was on to trap wild boars and fruit bats to collect fluid samples. While fruit bats are known to be hosts of Nipah, wild boars could have traces of the virus if they consumed fruits contaminated by the bats.

Health workers had already secured samples of rambutan fruits to test if they carried any trace of the Nipah virus possibly transmitted by an infected fruit bat.

The health department on Monday said 251 contacts of the child had been identified, of which 129 are healthcare workers.

The department has been on a high alert since the 12-year-old boy from Kozhikode succumbed to Nipah virus infection on Sunday.

The area within a three-kilometre radius from the house of the deceased child has been declared a containment zone. This includes wards from five panchayats.

The health departments in four districts -- Kozhikode, neighbouring Kannur, Malappuram and Wayanad -- have been put on high alert.