The panel cited their fallout on people, industrial production and jobs 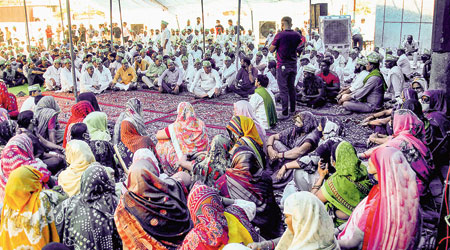 The National Human Rights Commission (NHRC) on Tuesday directed the Centre, the governments of Delhi, Rajasthan, Haryana and Uttar Pradesh, and various statutory authorities to file reports on the farmers’ protests and their fallout on people, industrial production and jobs.

Farmers have been picketing Delhi’s borders since November last year to protest three controversial central farm laws. The movement has spread to other states as well. The peasants believe the new laws will deprive them of their land and livelihood and facilitate a corporate takeover of agriculture.

In a statement issued in New Delhi, the NHRC said it had received several complaints regarding the farmers’ protest.

“There are allegations of adverse impact on industrial units, seriously affecting more than 9,000 micro, medium and large companies. Allegedly, transportation is also adversely impacted, causing commuters, patients, physically challenged people and senior citizens to suffer due to the heavy congestion on roads,” the rights panel said.

“There are also reports that people have to travel long distances to reach their destinations due to the ongoing farmers’ agitation and barricades have been put on the borders,” it added.

The commission issued notices to the chief secretaries and the police directors-general of Uttar Pradesh, Haryana, Rajasthan and Delhi (police commissioner), calling upon them to submit action-taken reports.

“There is an allegation that there is breach of corona protocols by the agitating farmers at the protest sites. There is further allegation that the inhabitants are not being allowed to move out of their houses due to the blockade of the passages,” it said.

“Since the agitation involves the issue of human rights whereas the right to agitate in a peaceful manner is also to be respected. The commission needs to take care of various human rights issues,” the NHRC said in its statement. 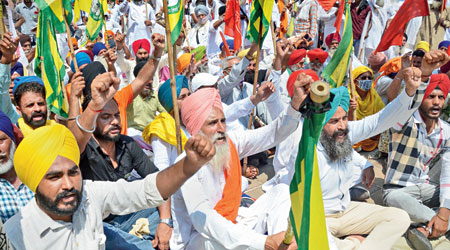 Descendants of Jallianwala Bagh martyrs, farmers and members of various social organisations take part in a protest march in Amritsar on Tuesday over the facelift the Centre has given to the heritage site. The renovation project was implemented by the Union ministry of culture. The widely criticised new features include a light-and-sound show, a glass encasing of the martyrs’ well, and an embellishment of the stark brick alley through which Reginald Dyer’s troops had entered the premises and shot hundreds of peaceful pro-Independence protesters dead.
PTI

⚫ The NHRC requested the Institute of Economic Growth to examine the adverse impacts of the farmers’ agitation on industrial and commercial activities and production, and how it has disrupted transport services and affected commercial and normal consumers, including inconvenience and additional expenditure. The IEG has to submit a report by October 10.

⚫ The National Disaster Management Authority and the ministries of home affairs and health are to submit reports on the adverse impact of the farmers’ movement on adherence to Covid protocols.

⚫ The NHRC reminded the district magistrate of Jhajjar in Haryana to file by October 10 a report whether compensation had been paid to the family of a human rights activist allegedly gang-raped at a protest site.

⚫ The commission requested the Delhi School of Social Work of Delhi University to conduct a survey and submit a report assessing the disruption of livelihood, lives and the impact on the aged and the infirm due to the farm protests.