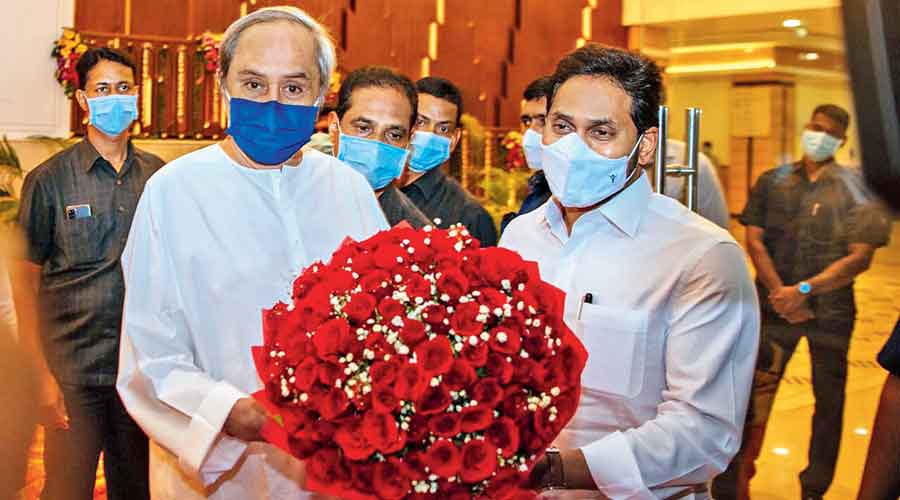 Both the chief ministers have decided that the chief secretaries of the two states will set up an institutional mechanism to deliberate on outstanding issues and find a solution that is in the best interest of the people of Odisha and Andhra Pradesh.

Jagan arrived here in the afternoon and was closeted with Naveen for about half an hour at the state secretariat. Officials from both the states also took part in the meeting.

While the Odisha government insisted on finding a solution to the dispute over the 21 villages of the Kotia gram panchayat in Koraput district, Andhra Pradesh officials sought Odisha’s cooperation in the execution of various ongoing water dam projects on the border between the two states.

Later, a mutually agreed joint statement of Naveen and Jagan was released to the media. Both the states agreed to work closely on the following issues: Kotia group of villages, Neradi barrage, Jhanjavathi reservoir, Polavaram project, release of water for the Bahuda river and mutual no objection certificate for the Balimela and Upper Sileru in the energy sector.

Both the states will work towards setting up a chair for Odia and Telugu languages in B.R. Ambedkar University, Srikakulam and Berhampur University respectively.

“Besides, appointment of language teachers in schools in border districts of the two states, supply of books and conduct of language examination will also be taken up to promote brotherhood,” the statement reads.

Ahead of their meeting in the evening, chief secretaries of both the states deliberated upon the issues pertaining to construction of Neradi barrage over the Vamsadhara river, Kotia cluster of villages and Jhanjavathi project.

The Odisha government said how Andhra officials intruded into the villages under Kotia panchayat and other parts of southern Odisha and created a serious law-and-order problem.

The officials cited the need to maintain the sanctity of the border between the two states. Odisha government officials also pointed out how Andhra was trying to implement its welfare schemes in Odisha village.

The Odisha government officials also cited how despite their opposition Andhra Pradesh had conducted panchayat elections in seven villages of the Kotia gram panchayat.

Earlier, both the states had moved the Supreme Court on the issue of Kotia and the apex court had asked both of them to talk to each other and find a solution.

The Andhra officials explained the need for acquiring 103 acres that is required from Odisha for the construction of the Neradi barrage on the Vamsadhara (Project II expansion). They said out of 103 acres, 67 acres is riverbed area and maintained that the barrage would provide irrigation facilities to nearly 6,000 acres in Odisha.

It’s an ongoing irrigation project across the interstate river Jhanjavathi in Vizianagaram district.

Initially an inter-state agreement was signed on December 25, 1978, to utilise the water of the river. Later on July 27, 1980, a meeting was held to find a solution to the issue of submergence. However, the issue is yet to be resolved.