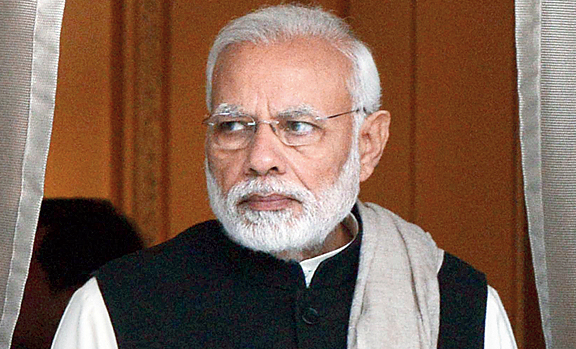 Some of the recurring jokes about Prime Minister Narendra Modi have been associated with his foreign travel in the service of the nation. So much so that countries have been divided into “Modi-visited” and “Modi-not-visited”.

Now, the government has come out with an authorised list of countries Modi has toured as Prime Minister.

Now the fine print: replying to questions in the Rajya Sabha, junior foreign minister V.K. Singh pointed out on Thursday that some of the countries Modi had visited since June 2014 figure among the 10 from where India had received the highest foreign direct investment.

No direct link can be explicitly established between state visits and decisions by foreign investors. But the data were provided because the questioner, Congress MP Sanjay Sinh, had sought “details of investment received from the countries visited by the current Prime Minister”.

However, another question by Sinh did not elicit a complete answer. The MP had sought “the purpose and total expenditure on each journey together with the names and designation of the persons, official and non-official, who accompanied both the Prime Ministers (Modi and Manmohan) during their foreign tours”.

Minister V.K. Singh listed strengthening relations, including investments, among the objectives of the tours but added that since the information sought on the officials who accompanied the Prime Ministers was “sensitive in nature, the same cannot be enclosed”.

According to the data provided by the government, a sum of Rs 1,583.18 crore was spent on maintaining the Prime Minister’s aircraft and Rs 429.25 crore on chartered flights between June 15, 2014, and December 3, 2018.The total expenditure on the hotline was Rs 9.11 crore. However, this does not include the expenditure on hotline facilities during Modi’s foreign visits in 2017-18 and 2018-19.