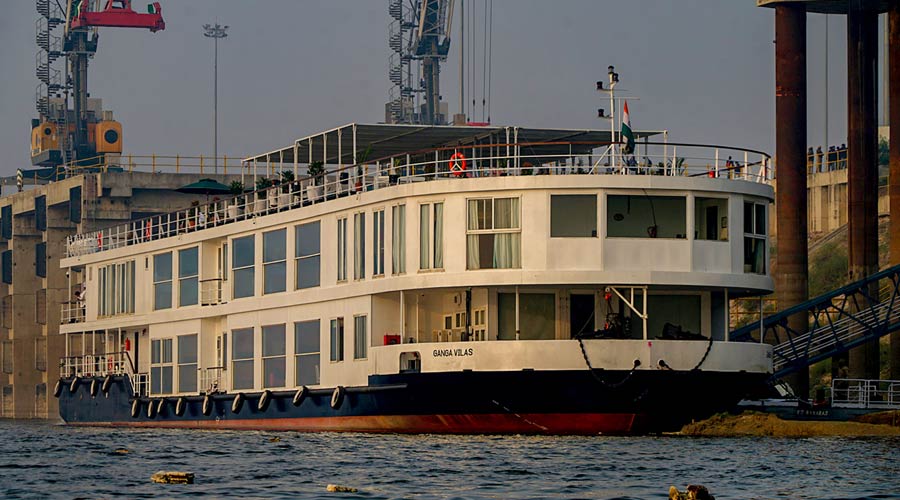 The world's longest luxury river cruise MV Ganga Vilas has reached Patna and the vessel will continue its onward journey as per schedule, the government said on Monday while debunking reports that the vessel was stuck in Chhapra.

The Ministry of Ports, Shipping and Waterways in a release stated that the cruise vessel sailed as per its schedule on National Waterways 1.

"There is absolutely no truth in the news that the vessel is stuck at Chhapra. The anchoring place and mode of transport of tourists to the bank is decided by the cruise operator depending on safety and privacy of its passengers," the ports, shipping and waterways ministry said.

After stopping at Doriganj on January 16, 2023 the cruise vessel reached Patna on January 16 ,2023 at 4.45 PM, the release said, adding that all through its journey the waterway levels were fully maintained and monitored for the required draft of with navigation facilities.

The statement said as per the planned itinerary the tourist also visited destinations en-route, including Doriganj to see the ruins of a fort.

Tourists were taken to the bank from the vessel using the tug boat to ensure their safety and privacy, it added.

The statement said draft of waterway at Doriganj is 3.5 m much above the vessel draft requirement of 1.4 m.

IWAI said in a tweet quoting Bandopadhyaya clarified: "The Ganga Villas reached Patna as per schedule. There is absolutely no truth in the news that the vessel is stuck in Chhapra. The vessel will continue its onwards journey as per schedule." Prime Minister Narendra Modi last week flagged off 'MV Ganga Vilas' cruise from Varanasi, which will travel 3,200 km in 51 days to reach Dibrugarh via Bangladesh, sailing across 27 river systems.

However, one will have to wait for more than a year to get a suite in the luxury ship, which will cruise across 17 river systems as it is fully booked till March 2024.

Modi flagged off MV Ganga Vilas for its maiden voyage with 32 tourists from Switzerland.

MV Ganga Vilas is the first-ever cruise vessel made in India. The luxury cruise has three decks and 18 suites on board with a capacity of 36 tourists with all the luxury amenities.

MV Ganga Vilas vessel is 62 meters in length, and 12 meters in width and comfortably sails with a draft of 1.4 meters.

The ship has 39 crew members and its captain is Mahadev Naik who has more than 35 years of experience. PTI BKS MR