PM calls for being self-reliant, renews 'vocal for local' pitch 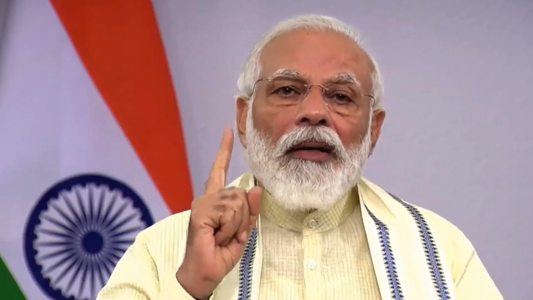 Prime Minister Narendra Modi on Tuesday announced the extension of the Pradhan Mantri Garib Kalyan Anna Yojana (PMGKAY), a free ration scheme, for 80 crore people across the country till the end of November.

"...It has been decided to extend the Pradhan Mantri Garib Kalyan Anna Yojana till Diwali and Chhath Puja, i.e. till the end of November," Modi said in a televised address to the nation.

On the extension of the scheme, he said the 80 crore beneficiaries will receive 5kg of wheat or rice and 1 kg of pulses per month free of cost, adding that it will incur an additional expense of Rs 90,000 crore to the government. The scheme was initially rolled out for three months.

The Prime Minister also said the government is working on a "one nation, one ration card" initiative. "The initiative will benefit migrant workers, who move to other states in search of work," he said.

This was Modi's sixth such address to the nation since the coronavirus outbreak in the country. It was also his first address to the nation after Indian and Chinese troops clashed in Ladakh on June 14 in which 20 Indian soldiers were killed. The Prime Minister, however, did not mention anything about the incident in his more than 16-minute-long address.

Modi credited farmers and taxpayers with boosting the nation's battle against Covid-19.

Calling for being self-reliant, the Prime Minister also iterated his call to be "vocal for local" products.

He also said that a timely lockdown to contain coronavirus and other decisions saved many lives, but added that since "Unlock 1" has begun, people have shown negligence.

"When we have to be more careful, being negligent is a cause of concern," Modi said.

He said that in comparison to other countries across the globe, India has done well in dealing with the pandemic.