Organised by chief minister Shivraj Singh Chouhan, the convention was part of the BJP’s counter-offensive to the ongoing protest 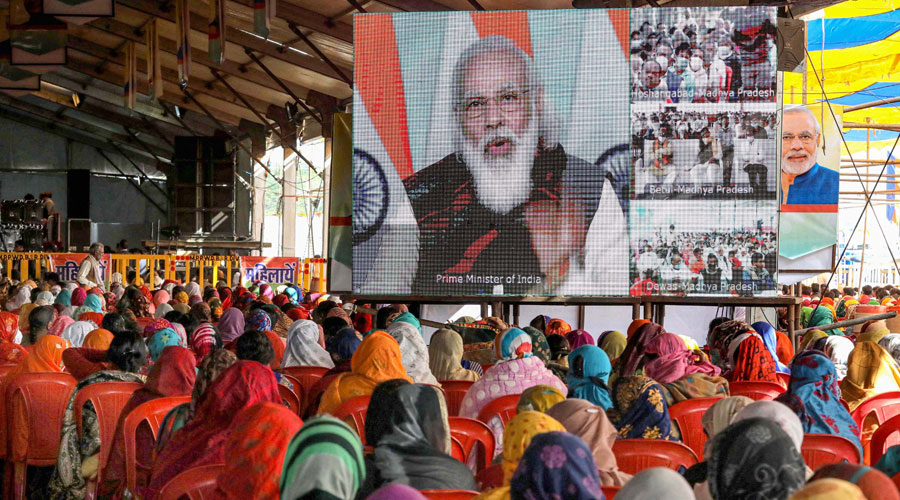 Prime Minister Narendra Modi on Friday defended the new farm laws, castigated the Opposition and made a “folded-hands” appeal to the protesting farmers, saying the government was ready to discuss all their concerns.

“If anyone has any apprehensions even after these efforts by the government, we are ready with our heads bowed and hands folded, and with the utmost humility, to talk about every concern of the country’s farmers,” Modi said, addressing a virtual convention of farmers in BJP-ruled Madhya Pradesh.

Organised by chief minister Shivraj Singh Chouhan, the convention was part of the BJP’s counter-offensive to the ongoing farmers’ protest, aimed at showing that the new laws had widespread support. The party has been organising similar conventions in other states too.

Modi accused the Opposition of “misleading” the farmers and “spreading lies”.

He took recourse to Hindu religious symbolism and almost repeated what he had said in Varanasi last month, claiming his government was “pavitra” (pure) as “Gangajal” and “Ma Narmada ka paani” (the waters of the Ganga and the Narmada).

Modi sought to portray the new farm laws as measures aimed at modernising agriculture and introducing India’s farmers to global practices and standards.

He claimed there had been “vyapak charcha” (extensive discussions) with all stakeholders before the laws were passed.

The Opposition accuses the government of railroading the bills through Parliament in September without the required discussions. The farmers, too, have said they were not consulted.

Modi said Opposition leaders were jealous and were asking themselves “why they had failed to implement the reforms (and) how Modi had done it and why Modi was getting the credit”.

“I want to tell all the political parties with folded hands, ‘Keep all the credit with you’,” he said. “I’m giving the credit to all your old manifestos; I don’t want any credit.”

Modi sought to claim that the protests were politically motivated, saying the new laws had been in force for six to seven months but the agitation had started only now.

The farm laws had been introduced in the form of ordinances during the coronavirus lockdown in the summer. The ongoing protests began after the corresponding bills were passed in September.

Modi said the government had repeatedly been asking which among the clauses in the laws were of concern but there had been “no concrete reply”.

The farmer leaders have given to the government in writing their objections to the laws.

Modi said that the Opposition parties, when they were in power, had for eight years suppressed the Swaminathan Commission report on farm reforms and that it was his government that had implemented it.

He next sought to target the Congress without naming the party, alleging farm loan waivers had been promised in Madhya Pradesh and Rajasthan ahead of state elections but were never implemented.

Madhya Pradesh and Rajasthan voted the Congress to power in December 2018. But in Madhya Pradesh, the government was toppled by defections in March 2020 and the BJP is now in power.

Modi said the Opposition’s “biggest lie” was that the system of minimum support price (MSP) would end.

He said the new laws had been implemented six to seven months ago but the government had continued with the MSP.

“I want to assure our farmers that the MSP will continue,” the Prime Minister said.

The farmers want a legal guarantee on MSP, which the Modi government has so far been reluctant to give.