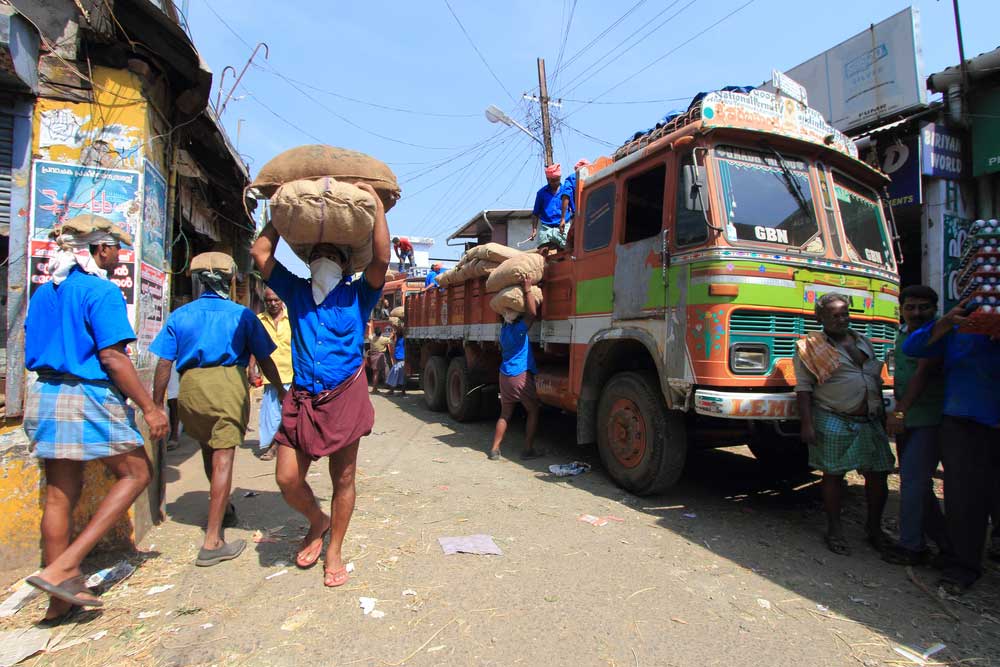 Workers unload gunny bags from a truck in Kochi. The committee has suggested that the minimum wage should not be less than Rs 375 for work done for the government, private establishments and individuals.
(Shutterstock)
Basant Kumar Mohanty   |   New Delhi   |   Published 17.02.19, 09:34 PM

The proposed national minimum wage, if accepted, will pose a major challenge to the Mahatma Gandhi National Rural Employment Guarantee Act (MGNREGA), whose wage rates are much lower in all states.

The committee has suggested that the minimum wage should not be less than Rs 375 for work done for the government, private establishments and individuals. In the alternative suggestion, the panel has recommended five slabs of wages based on region, with the amount varying between Rs 342 and Rs 447. The rates are based on July 2018 prices.

The national minimum wage has been conceived under the Wage Code Bill, which has been introduced in Parliament.

The MGNREGA, under which up to 100 days’ work is provided a year to every rural household, revises its wage rate annually on the basis of the Consumer Price Index-Agricultural Labourer (CPI-AL). Nearly 10 crore families are registered under the scheme.

The CPI-AL gives more weightage, as a tool to capture inflation, to the prices of food items in the rural sector than the expenses incurred on education and health, among others. The CPI and the CPI-IW gives balanced weightage to food and non-food items, such as clothing and entertainment.

So, if the national minimum wage is accepted, the wages paid under the MGNREGA will not only have to be raised, revisions will have to be done every six months instead of a year and the changes will have to be calculated on a formula that factors in not only food items but also several non-food items.

An official of the Union ministry of rural development, which implements the MGNREGA, said the scheme might have to be amended to implement the national minimum wage.

The wage rates under the MGNREGA varies from state to state because of mainly topographic reasons, and in no state is the amount anywhere close to the proposed national minimum wage (See chart).

The minimum wage rates fixed by the individual states, which is paid for work done for the government and also private individuals, are also lower than the proposed rate. The states too will have to increase the amounts if the national minimum wage is accepted.

Economist Abhijit Sen, who had been a member of the erstwhile Planning Commission, said the national minimum wage would be binding on the MGNREGA if the Wage Code Bill is passed.

“The MGNREGA will have to follow the NMW (national minimum wage) rate once the Wage Code Bill is enacted. This NMW will be the statutory rate for all states too,” Prof. Sen said.

“The revision of wage rates under the MGNREGA will become much better if the government follows the CPI or the CPI-IW,” Sen said.

The rural development ministry has proposed changing the revision formula from CPI-AL to CPI-Rural, which captures the effect of inflation on items such as transportation other than food. However, the Union finance ministry is yet to accept it because it would raise the MGNREGA bill by Rs 1,200 crore.