Alternative has different slabs for different regions, but minimum is way above current level of Rs 176 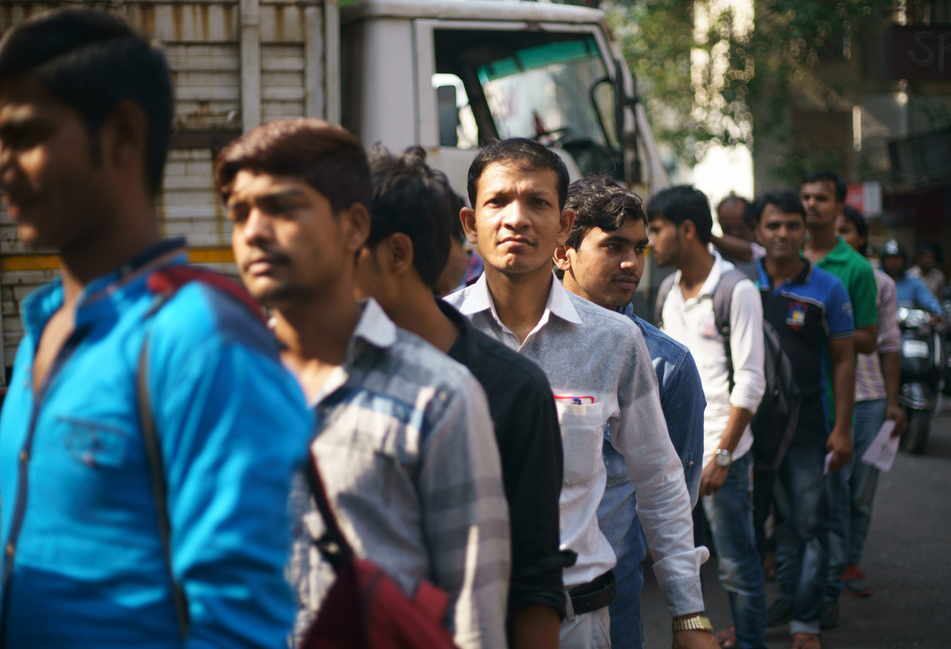 Workers standing in line outside a construction site for their daily wage in Mumbai. The centre appointed committee has suggested that the minimum wage should not be less than Rs 375 for work done for the government, private establishments and individuals.
Shutterstock
Basant Kumar Mohanty   |   New Delhi   |   Published 15.02.19, 10:27 PM

The committee has suggested that the minimum wage should not be less than Rs 375 for work done for the government, private establishments and individuals.

In the alternative suggestion, the panel has recommended five slabs of wages based on region, with the amounts varying between Rs 342 and Rs 447. The rates are based on July 2018 prices.

It has recommended revision of the minimum wage every six months.

A Centre-notified minimum floor-level wage of Rs 176 is in place but it is not binding on the states. In Bengal, the minimum wage is Rs 211.

The suggestions of the committee, headed by Anoop Satpathy, a Fellow at the VV Giri National Labour Institute, and having six members including officials from the labour ministry and the International Labour Organisation, has been uploaded on the ministry website for public feedback.

The final call will be taken by the Centre in consultation with Central Advisory Board on Wages, headed by the Union labour minister, state governments, trade unions and employers.

If the suggestions are accepted, almost all states will have to increase minimum wage rates. In Bengal, the minimum wage now is Rs 211.

Departing from the usual formula of fixing minimum wage rate based on expenditure on food and other items, the expert committee has prescribed a method of expenditure based on balanced diet. In the non-food category, the committee has included expenses incurred on entertainment and conveyance.

The Minimum Wages Act, 1948, gave the power to states to decide their minimum wage rates. However, the law does not define on what basis and at which level the minimum wage should be fixed.

The Indian Labour Conference of 1957 had prescribed a formula based on consumption expenditure for fixing minimum wage. It had backed factoring in the money spent by people on food required to meet a specified level of calories, and certain expenses on non-food items.

However, most states did not follow the formula. As a result, there are wide variations in minimum wage rates for the same work. In many cases the wage is not commensurate with the cost of living.

The India Wage Report published by the ILO last year found that the wage rates of many states were below the minimum floor-level rate.

The Satpathy committee has advocated a formula based on balanced diet that factors in a minimum threshold of calories, proteins and fat for the wage-earner. It has suggested that the requirements should include 50 grams of protein and 30 grams of fat a day.

It has also included non-food expenditure such as the money spent on clothing, fuel, electricity, house rent, education, medical care, footwear and transport.

N.K. Sahu, a retired Indian Economic Service officer who had been in charge of the Socio-Economic Caste Census, which had been conducted to identify deprived people, said the proposed method was more scientific.

The wage gap is still too large