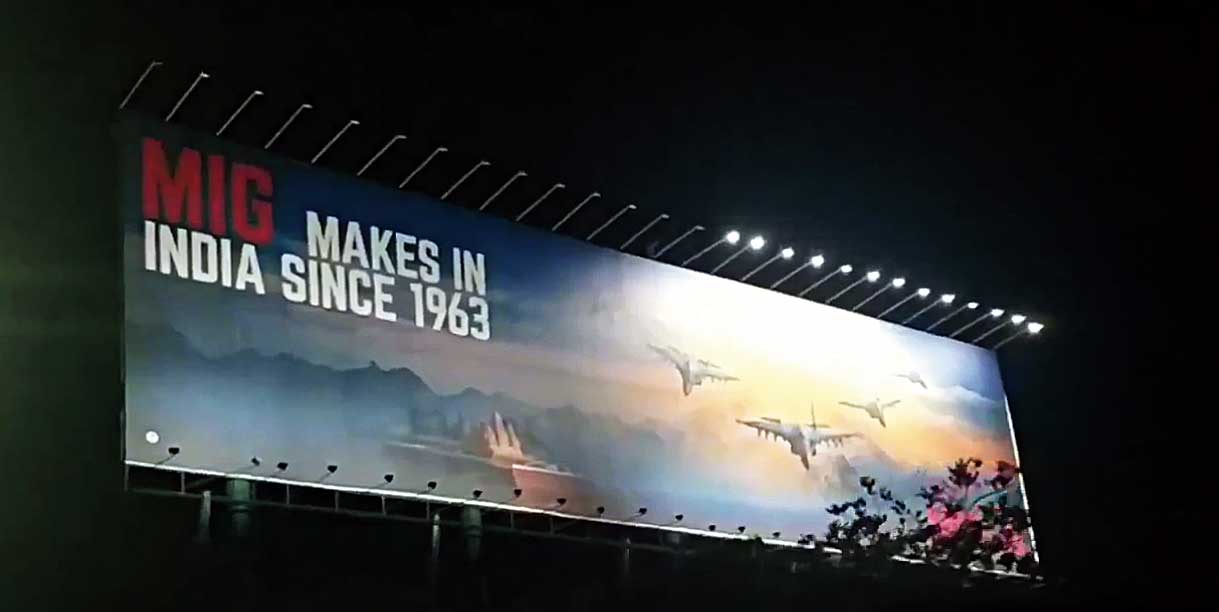 The message on the hoardings is hard to miss in this season of the Rafale.

“MiG makes in India since 1963,” say the gigantic hoardings with pictures of the fighter plane that the Bangalore-based Hindustan Aeronautics Limited (HAL) has manufactured under licence from its original Russian maker.

The unstated reminder: MiG fighter jets were being made in India for more than five decades before Prime Minister Narendra Modi conceived his Make in India programme.

The two hoardings appear to have been installed by the Russian manufacturer that has offered its MiG-35 for joint production with long-time partner HAL, the state-owned company that lost the contract to manufacture Rafale fighter jets after the Modi government decided to scrap the UPA agreement and sign a new deal for the purchase of the jets in flyaway condition from the French Dassault Aviation. Anil Ambani’s Reliance Defence got the offsets contract for the deal.

No HAL employee was forthcoming on who had put up the hoardings, one at the exit of Bangalore international airport and the other along the highway that leads to Yelahanka, the venue of the February 20-24 Aero India show on the city’s northern outskirts.

But a senior employee, who asked not to be named, appeared elated. “I saw the (first) hoarding while exiting the airport recently. At first it was a bit of a surprise to see such a bold message like that one. But I felt proud of my company and whoever is speaking out loud,” the official told The Telegraph last week.

“There is no alternative to HAL, as we have a history of making more than 4,500 aircraft. Yet the BJP has been going on its slur campaign to spoil our image.”

The second hoarding even carries a mention of the MiG-35 multi-role fighter.

Another HAL official said the hoardings “would have certainly caught the attention of Indian officials and delegates” at the Aero India show, especially at a time questions are being raised about HAL’s capability, productivity and ability to deliver in time and the dependability of Russian warplanes.

A second hoarding on the highway from the airport to the Aero India air show venue in Yelahanka on the outskirts of Bangalore.
Picture tweeted by Congress leaders

A HAL union leader, who too didn’t want to be named, said the hoardings “couldn’t have come at a better time”.

HAL was formed in October 1964 when its parent company, the 1940-established Hindustan Aircraft Limited, joined a consortium set up to manufacture MiG-21 aircraft under licence.

Once dreaded by enemies flying American and west European fighter jets, MiG-21s are still zipping around Indian skies in its upgraded avatar.

While the media often call it “Flying Coffin” — because of the number of pilot casualties — MiG-21s have been the Indian Air Force’s mainstay during conflicts, including the 1999 Kargil standoff when it teamed up with MiG-29 and Mirage 2000 aircraft to keep the Pakistan Air Force’s F-16 interceptors under check.

In this week’s air strikes in Pakistan, India had used Mirage 2000. Wing Commander Abhinandan Varthaman was flying a MiG-21 Bison.

HAL has so far license-produced more than a hundred each of MiG-21, MiG-27 and Sukhoi 30-MKI planes, and the British Jaguar — all still in operation. This is just a few of the fixed-wing aircraft and helicopters manufactured by the aerospace and defence company.

The public sector company, which functions from nine locations and 20 divisions and has 11 research and development centres, has so far designed and developed 17 types of aircraft and helicopters. The latest wares from the HAL hangars are the HTT-40 basic trainer aircraft, the Light Utility Helicopter and the Light Combat Helicopter, both smaller cousins of the Advanced Light Helicopters that have several variants.

“I am glad even our chairman spoke his mind amidst the din of the anti-HAL campaign,” the senior HAL official said.

Company chairman R. Madhavan had told a media conference that the political slugfest had made everyone at HAL “feel bad”. “Our capabilities are on a par with anyone else. There is no shortage on these fronts. Anyone can make such comments,” Madhavan had said about the questions raised about his company’s capabilities.

V.K. Singh, minister of state for external affairs and former army chief, had recently said that “parts of the (HAL-made) aircraft fall off on runway”, referring to the Mirage 2000 crash that killed two IAF pilots on February 1.