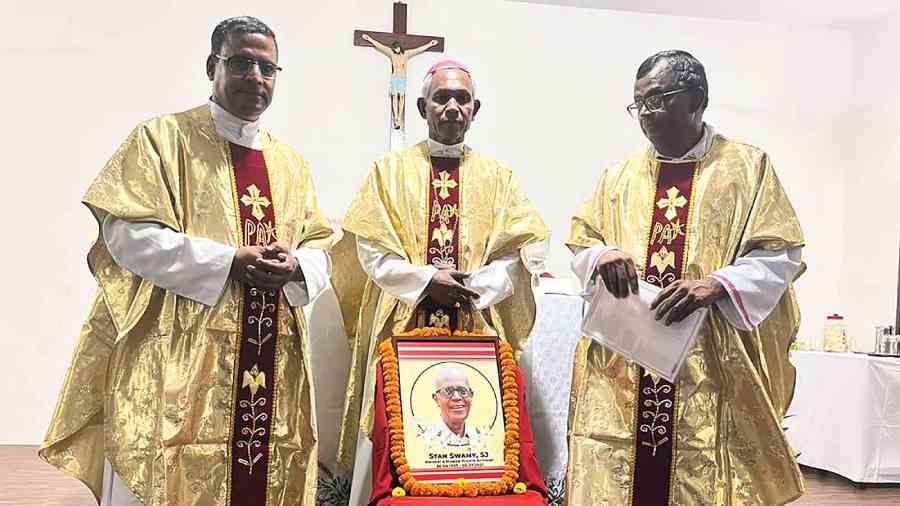 The picture shows the Jamshedpur diocese Bishop Telesphore Bilung (centre) at the memorial mass for Father Stan Swamy at Mango in Jamshedpur on Tuesday
Bhola Prasad
The Telegraph   |   Ranchi   |   Published 06.07.22, 06:20 AM

A march for justice, release of books, webinars, memorial mass and tributes marked the first death anniversary of Jesuit priest and rights activist Father Stan Swamy on Tuesday. Civil society organisations, rights groups and Left parties took out a ‘March for Justice’ in Ranchi and handed over a memorandum addressed to President Ram Nath Kovind through the Jharkhand governor Ramesh Bais.

Stan Swamy, 84 and suffering from Parkinson’s disease, was arrested in October 2020 on terror charges from his residence near Ranchi. His health deteriorated and he died in a hospital in Mumbai while in custody, waiting for the trial to start.

“We have requested the President of the country through our governor for a judicial probe into the institutional murder of Father Stan Swamy so that punishment is meted out to those involved in the killing. We also demand that all the remaining 15 accused in the Bhima Koregaon incident be freed along with other human rights activists lodged under barbaric law UAPA in different prisons of the country. We also demanded that false cases lodged against human right activist Teesta Setalvad, journalist Mohammed Zubair and former DGP Gujarat R.B Sreekumar be immediately withdrawn and they be freed,” said a CPI-ML state committee member who was part of the march.

Over 2,600 people lost their lives in more than 3,000 “roll down” accidents in Himachal Pradesh in the past five years, state police said on Tuesday. The police statement came a day after a bus fell into a gorge in Sainj valley of Kullu, resulting in the death of 13 people. The police said the main reason for such accidents is the lack of crash barriers along the roads. The statement said the total road length in the state is 38,035km, whereas crash barriers have been installed at only 520km of the road length.