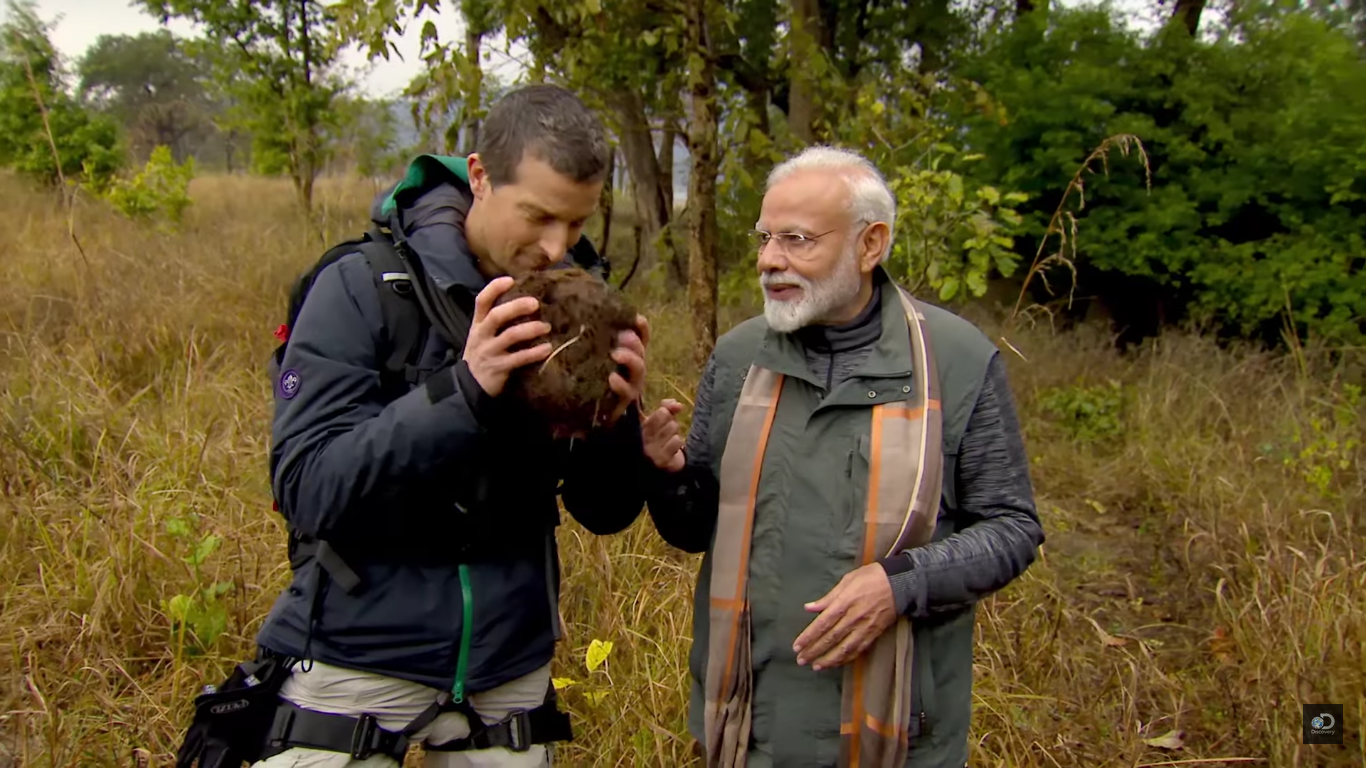 Narendra Modi will soon be seen doing a caper in the wild with none other than daredevil adventurer Bear Grylls.

The host of the popular show Man Vs Wild on Discovery Channel revealed on Monday that his new episode will feature the Indian Prime Minister.

“People across 180 countries will get to see the unknown side of PM Narendra Modi as he ventures into Indian wilderness to create awareness about animal conservation & environmental change. Catch Man Vs Wild with PM Modi @DiscoveryIN on August 12 @ 9 pm. #PMModionDiscovery,” Grylls wrote on his Twitter page.

The presenter also posted a promotional trailer of the show, in which Modi is seen with Grylls walking through a jungle and at one point helping Grylls craft a spear.

me trying to copy my class monitor's assignment be like : pic.twitter.com/U8uAO2FQ43

People across 180 countries will get to see the unknown side of PM @narendramodi as he ventures into Indian wilderness to create awareness about animal conservation & environmental change. Catch Man Vs Wild with PM Modi @DiscoveryIN on August 12 @ 9 pm. #PMModionDiscovery pic.twitter.com/MW2E6aMleE

The show was shot earlier this year at the Jim Corbett National Park. The coincidence between the shooting of the show and Pulwama terror attack in Jammu and Kashmir in which 40 CRPF troopers were killed was not lost on the Tweeple. Many vented their displeasure on Twitter, suggesting that the Prime Minister was out making a video when terrorists wreaked havoc.

The Pulwama attack happened on February 14, around the same time when Modi was on an election campaign in Uttarakhand and shot for the video at the wildlife sanctuary there.

Then on Entertainment Channels ( By his movie )

Waiting for him on Sanskar, Aastha

Then on Star Sports

And finally on Netflix 😂

People telling PM Modi b4 going on with Bear Grylls that if u go with him u have to climb trees, cross rivers eat insects or wild fruits , walk miles

NEVER FORGET: on 14th Feb 2019 when Natwarlal was on this joyride in the jungles of Uttarakhand, he knew 40 of our men were killed in Pulwama by terrorists. He continued to laugh & having fun while every other Indian was mourning deaths.#PMModionDiscovery pic.twitter.com/grR2sIvlfh

#PMModionDiscovery
Enjoy the shot of Man vs Wild while CRPF jawan were getting killed. pic.twitter.com/JLqP8fqxva

We will never forget this day #PulwamaAttack, Modi was busy shooting this film in Jim Corbett when nation was mourning Pulwama attack. @BearGrylls We know it's not your mistake, he is big actor than you. Our Prime Minister is not serious about the country. https://t.co/1iF4Mihfid

We ain't proud of it, Cos when he was busy marketing himself we had lost 40 of our Brave Jawans to Terrorist attack in #Pulwama.

So he was shooting this while our jawans died in Pullwama

I didn't know you had to promote fascists to create "awareness about animal conservation". What a fall. Many Indians would have loved to talk about his "known" side too, but they are no longer around