Advertisement
Home / India / Mamata to Centre: Rajeev Kumar was on duty, not dharna

Mamata to Centre: Rajeev Kumar was on duty, not dharna

During the 70-odd hours of the dharna, the police chief wasn't on the dais although he was at the Metro Channel 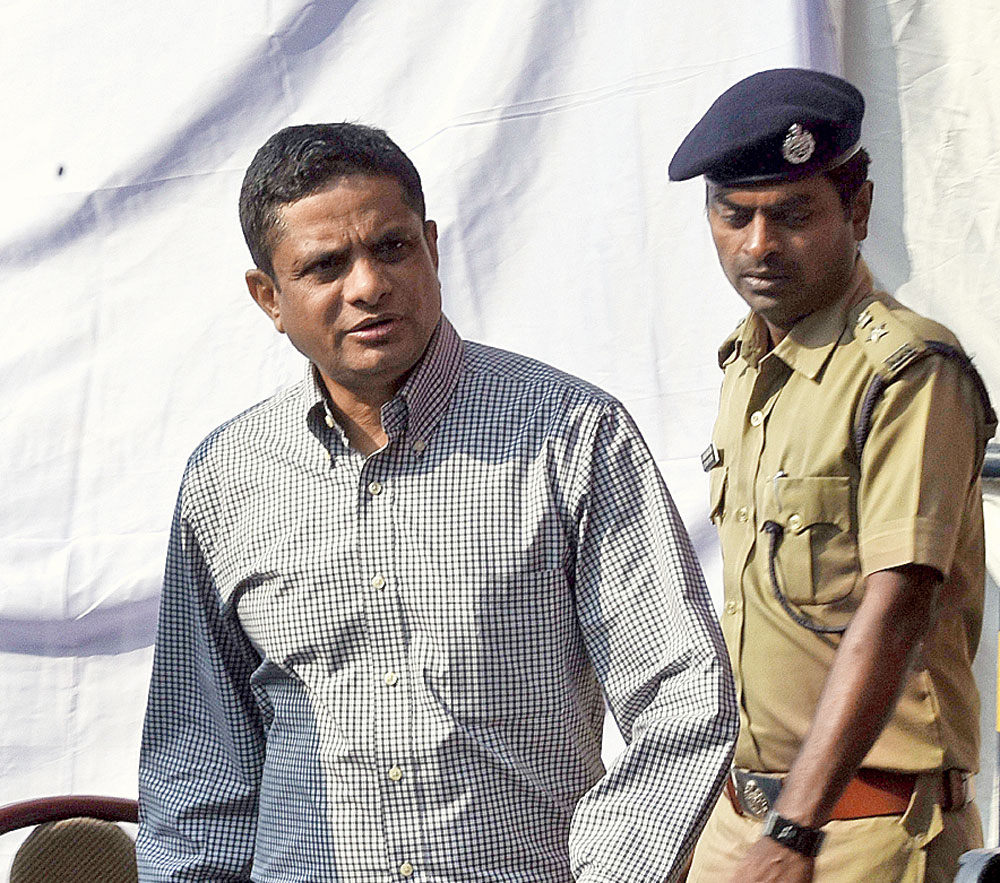 The Union home ministry on Tuesday recommended to the Bengal government departmental action against Calcutta police commissioner Rajeev Kumar for allegedly sitting on a dharna with Mamata Banerjee at the Metro Channel here on Sunday night.

The charge has been contested by the chief minister herself, who said the officer was never on the dais and was at the spot only to carry out his duty of ensuring her security.

A letter from the Union ministry had reached state chief secretary Malay De, citing Kumar’s “indisciplined behaviour” and “violation of the All India Services (Conduct) Rules”, sources said. In the letter, the Centre has advised the state government to initiate proceedings against Kumar.

“He (Kumar) never sat on the dais or joined the dharna. He was doing his duty as I was here, running the government from here. Not the dharna manch, but the police outpost down there…. He was taking care of my security and taking instructions for doing his duty,” Mamata thundered on Tuesday evening, with Telugu Desam Party chief N. Chandrababu Naidu standing by her side.

Attacking Union home minister Rajnath Singh for the directive for action against the police commissioner, Mamata said a letter in response would be sent on Wednesday.

“Kisyu hobey na. Phaltu, jottoshob (Nothing will happen. Rubbish, nonsense)!” Mamata said. “It is sad, it is bad, it is mad,” she added, to laughter.

Sources at Nabanna said Kumar was unlikely to be penalised as the action has to be taken by the state government. The final decision to initiate proceedings lies with the chief secretary who acts under instructions from the chief minister.

“First of all, it was not a political dharna. And, secondly, with this recommendation, it has become clear that the Centre is trying to penalise Rajeev Kumar without any fault of his. Now that the chief minister has defended the commissioner, there is no chance of any action against him,” said a senior bureaucrat.

“The commissioner reports to the chief minister and can go anywhere to take instructions. There is nothing wrong with it. The same thing happens in Andhra Pradesh…. Does the same not happen in Delhi?” he asked, before condemning the Narendra Modi government at the Centre for trying to instil “fear” in the heart of every official in the civil and police administrations.

The question of whether a city police chief can join a dharna has been doing the rounds after Sunday night’s pictures of Kumar — and some other senior police officers — sitting with Mamata at the venue appeared in the media.

Kumar was at the Metro Channel on Sunday night within minutes of the chief minister reaching the spot after announcing that she would sit on a dharna to “save the Constitution”. The dais wasn’t yet set up then and Kumar and other police officers were sitting around the chief minister.

During the 70-odd hours of the dharna, Kumar had not been on the dais although he was at the Metro Channel several times.

“When the Prime Minister goes for political rallies, the SPG team also goes there…. If the SPG, countless senior police officers and other top officers can go even for political rallies of the Prime Minister and senior BJP leaders, what’s the problem if the police commissioner comes here, an apolitical event that too only for doing his duty, to the chief minister?” Mamata asked.

The letter from the Union home ministry apparently mentioned that Kumar and some other officers had sat on a dharna with the chief minister, which was prima facie in contravention of the extant provisions of the AIS (Conduct) rules.

Rule 5(1) mentions “no member of the Service shall be a member of, or be otherwise associated with any political party or any organisation which takes part in politics nor shall he take part in, or subscribe in aid of, or assist in any other manner, any political movement of political party.”

Rule 7 states that no member of the Service shall, in any radio broadcast or communication over any public media or in any document published anonymously, pseudonymously or in his own name or in the name of any other person or in any communication to the media or in any public utterance, make any statement of fact or opinion which has the effect of an adverse criticism of any current or recent policy or action of the central government or a state government.