Mamata leaves Delhi, promises to visit once every two months 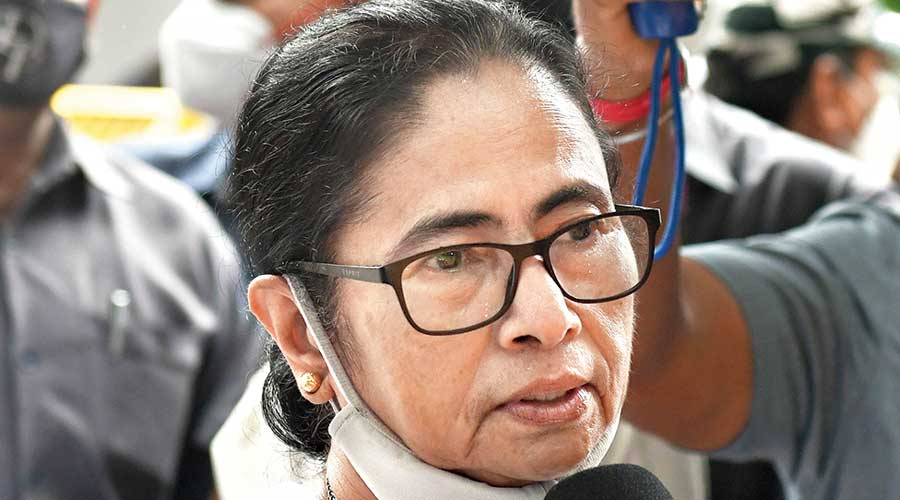 Mamata Banerjee has promised to return to New Delhi once every two months, describing her five-day tour of the capital as “successful”.

The Bengal chief minister, who reached Calcutta on Friday evening, said she spoke over the phone to NCP chief Sharad Pawar — a key figure in the national Opposition space she did not meet in person this time — and was planning a meeting the next time both were in Delhi.

“I think the visit was successful,” Mamata said before leaving the capital. “We met for political purposes, we met for development purposes. Both were very good.”

By “development”, she probably was referring to her meetings with Prime Minister Narendra Modi and Union transport minister Nitin Gadkari, in the course of which she placed several demands for the state.

But the primary focus of her Delhi trip was political, which she said was part of her quest to ensure a better functioning democracy in the country.

The chief minister met several Opposition leaders like Sonia Gandhi, AAP’s Arvind Kejriwal and DMK’s Kanimozhi. She spoke to Lalu Prasad, too, over the phone during her stay in Delhi.

“Let us believe that democracy must go on. To save democracy, everyone should come together and work as a unit. The nation is the largest space for work. If democracy is in peril, democracy is rendered vulnerable,” she added.

The Trinamul Congress chief made it clear again that “saving” India by protecting its democracy was to be prioritised above all else.

“Our slogan is ‘save democracy, save the nation’. Let us do the work for farmers, labourers, unemployed youths and others…,” Mamata said, adding that her Delhi visits would now be a regular feature.

“I have decided that I will come once every two months… after doing our work there (in Bengal),” Mamata said.

On the political side, she suggested that the biggest takeaway was the general willingness in the national Opposition to set aside differences and close ranks against the BJP.

Mamata said: “Opposition unity, that everyone will work together, nothing can be better than that.”

“I could not meet every single leader (this time). Because it is not allowed in the Central Hall of Parliament now because of Covid-19. But I met a lot of them. I think the outcome is good. Let us work together,” added the Trinamul chief.

Asked specifically about the Lok Sabha elections of 2024, she said: “Do not keep saying these things repeatedly. Say just the one thing, that the nation must be saved.”

Asked to elaborate on the “success” of the trip, Mamata said she was keen on balancing “both sides” — development and politics — during her visit.

“Number one: the country must be developed. We want development for the people,” she said.

The chief minister raised the issue of the rise in fuel prices. “Now, because of the diesel, petrol, LPG prices, everybody is concerned. Every person in this nation is worried. Such a lot of money… over Rs 3.74 lakh crore, the Centre took from the pockets of the common people,” she said.

The chief minister went on to attack the BJP-led Centre — without taking names — over various aspects of the way the country was being run.

“The way every-day prices of diesel, petrol and LPG have been on the rise…. Farmers are on the streets. Unemployment is on the rise. Covid-19 is spreading,” she said, pledging full support to the cause of the agitating farmers.

She said although there was no contact with the leadership of the farmers’ movement during this visit, she had spoken to them on several occasions in the past, and Rakesh Tikait had paid her a visit in Calcutta.

Mamata said she told Prime Minister Modi, during their meeting on Tuesday, about taking adequate measures so that the third wave of the pandemic does not turn out to be as severe as the second, and to ensure adequate supply of vaccines for mass immunisation.

The chief minister voiced concern over the heavy rainfall across vast swathes of Bengal over the past couple of days, and hoped it would not develop into a flood-like situation.

“In our state, there is a lot of rainfall. We don’t know if that would turn into a flood-like situation. I will have to go back and do the needful,” she said.

“Many places, in all states… such as Mumbai, saw a lot of rainfall, there were casualties there, for which I am sad,” Mamata added.