Mamata hopes for a stronger political opposition for 2024 polls

Since landing in Delhi on Monday, the Bengal chief minister has been advocating a united fight against the BJP with her mission 'Hope 24' 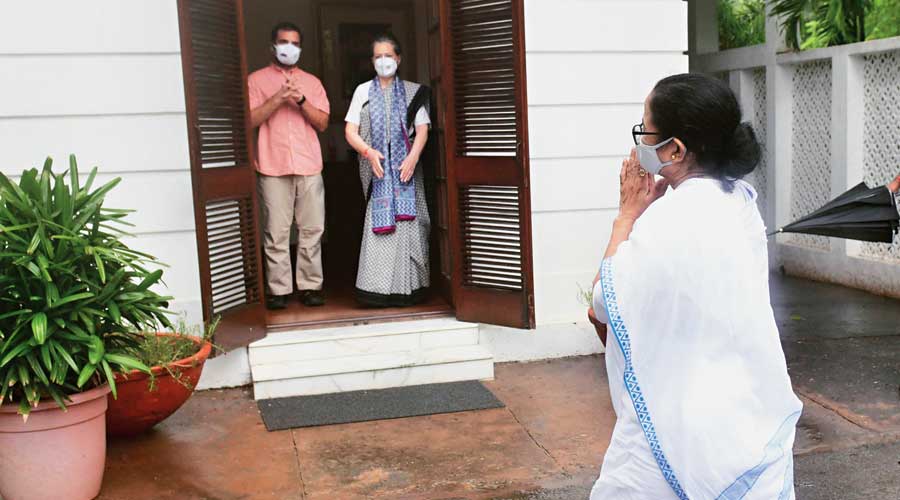 The BJP may appear to be very healthy but the Opposition parties will be politically stronger and the next general election will be one of hope, Mamata Banerjee said on Wednesday, an hour before she met Sonia Gandhi at her 10 Janpath residence with the objective of strengthening the Opposition alliance.

“The BJP may look very healthy, but from the political angle, the Opposition will be stronger this time…. We hope that the 2024 elections will be Hope 24,” the Bengal chief minister told reporters in New Delhi in the afternoon.

Since landing in Delhi on Monday, Mamata has been advocating a united fight against the BJP. At the media interaction and then during a brief reaction after meeting Sonia, she explained her mission. 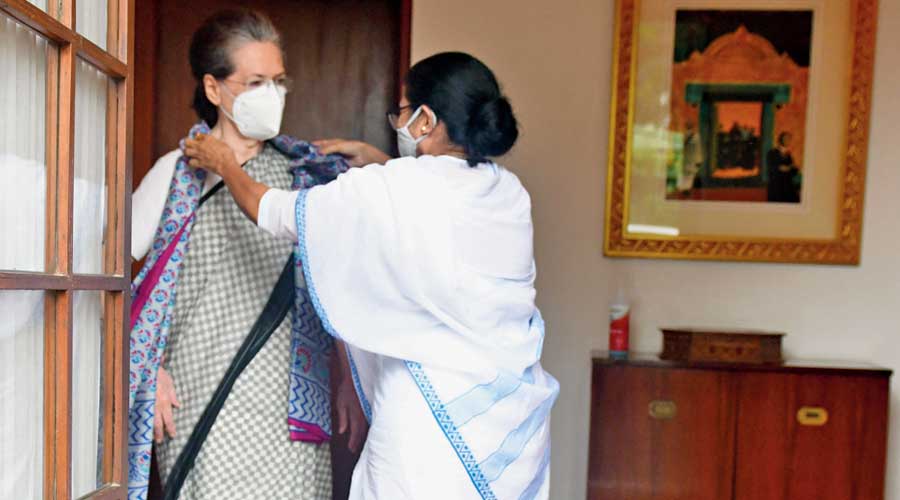 Hope 24 achievable: The central theme of Mamata’s argument has been the changing mood in the country over the past couple of years. She took care to explain how rising prices, the Covid mismanagement and the Pegasus intrusion have worked against the BJP.

Mamata said: “A lot of people who used to support them don’t anymore.”

“We have seen a lot of ‘achchhe din (good days)’, now we want to see ‘sachche din (days of truth)’…. Have faith in the people of this country,” she added.

While she stressed that a united Opposition was needed to capitalise on this mood, she had to face a volley of questions around the nuts and bolts of an Opposition alliance. 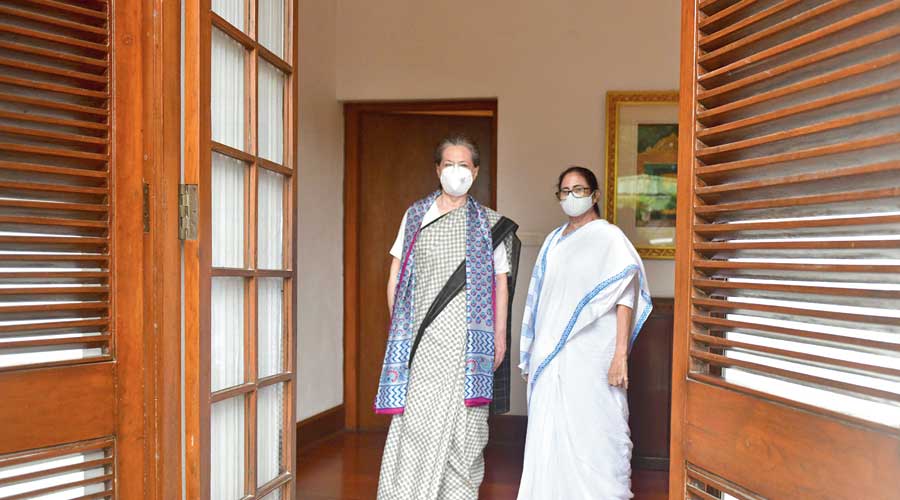 Mamata said: “A lot of people who used to support them don’t anymore.”
Telegraph picture

As Mamata had made a similar attempt before the 2019 Lok Sabha polls by bringing together representatives of 23 Opposition parties at a rally in Calcutta, questions on the failed experiment also flew thick and fast during the 75-minute interaction.

“Things have changed since then…. You know what was Narendra Modi’s popularity in 2019 and if you do a survey now, you will get to know what’s the situation now,” she said in an attempt to underscore that “Hope 24” is an achievable target.

In order to buttress her argument that the BJP can be defeated, she referred to Trinamul’s victory over the BJP in the recently held Bengal Assembly polls, which showed that Modi and Amit Shah are not invincible.

“If Bengal can do it, so can other states,” Mamata said during the interaction held at the residence of party MP Sukhendu Shekhar Roy.

“Puro desh-e khela hobe (the match will be played across the country),” she said, repeating her winning slogan in the Bengal polls. 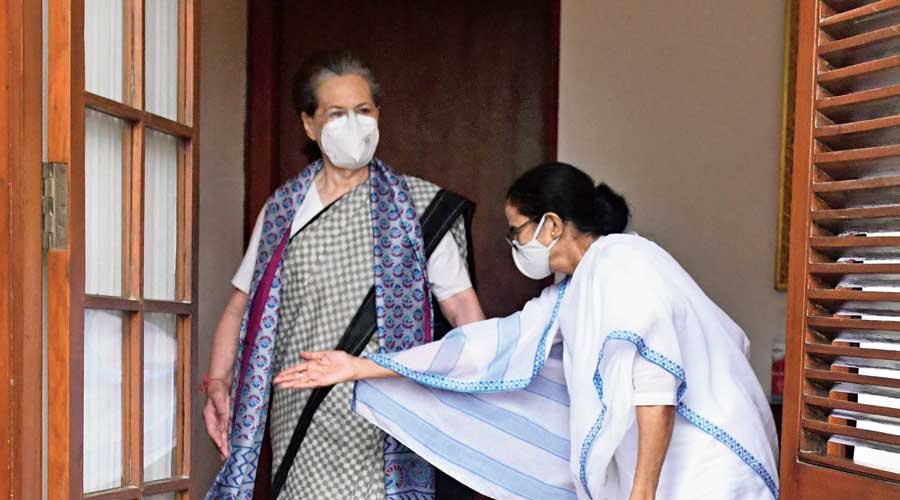 As any discussion on an anti-BJP front is incomplete without the Congress, Mamata had to face a flurry of questions — like its record of engineering the collapse of several non-Congress governments — on the role of the grand old party in the proposed front
Telegraph picture

Congress question: As any discussion on an anti-BJP front is incomplete without the Congress, Mamata had to face a flurry of questions — like its record of engineering the collapse of several non-Congress governments — on the role of the grand old party in the proposed front.

“I think Soniaji wants Opposition unity. She has invited me for tea and I will go straight from here,” said the Bengal chief minister, who recounted her association with the Congress president since the days of Rajiv Gandhi.

The manner in which she fielded the questions on the Congress — despite its poor show in subsequent polls and the leadership crisis in the party — and her meeting with Sonia were perceived as the first attempt towards bringing all the non-BJP parties together.

“If the BJP has to be defeated, all the Opposition parties have to come together,” she added while talking to reporters outside 10 Janpath.

Cautious Mamata: Since Mamata mooted the proposal for an Opposition platform to take on the BJP in her July 21 address and her party subsequently raised the anti-BJP pitch in Parliament, the Bengal chief minister has got the tag of the main architect of the proposed front.

If there is one striking theme of Mamata’s Delhi trip this time, it’s her repeated insistence that she is neither the face of the front nor its main force.

“I am a cadre,” Mamata told the news conference.

“I want to help in belling the cat…. I am not a VIP,” she added, making it clear that she was not interested in proposing a pole position for herself in the front.

The clarification was significant as Trinamul MPs had earlier in the day proposed at a meeting that she should lead the fight against the BJP and be the face of the Opposition.

Aware that such an endorsement may come in the way of the front even before its broad contours are defined, Mamata has been cautious on the question of leadership of the alliance.

“I am not a political astrologer who can answer questions on leadership of the front…. Everything will depend on the situation,” she said.

When pointed out that a fight against Modi without a face may hurt the prospects of the Opposition front, she replied: “The country will fight against Modi…. A lot of faces will come up to save our democracy.”

Inclusive approach: More and more parties are likely to join the fight against the BJP in the coming days, Mamata hinted while answering questions on whether attempts would be made to woo some of the BJP allies or parties friendly with the saffron camp in the proposed front.

“I maintain good relations with Jaganmohan Reddy, Naveen Patnaik and Chandrababu Naidu…. Some of them may not be with us today, but it doesn’t mean that they won’t come together,” Mamata said.

“If a political storm comes, it can sweep away a lot of things,” she added, predicting that a momentum against the BJP is about to develop.

According to Mamata, efforts should be made in states like Uttar Pradesh so that parties like the BSP and the SP join hands in the fight against the BJP.

Explaining the need for expanding the breadth of the alliance against the BJP, she referred to the recent experience in the Bengal polls that witnessed a triangular fight among the BJP, Trinamul and the Congress-CPM alliance.

“The Congress and the CPM should have thought who their primary enemy is,” Mamata said.