Seven dead, nine injured as fire breaks out in residential building in Indore

27-year-old Shubham Dixit allegedly torched a vehicle which belonged to a woman who had spurned him: Police 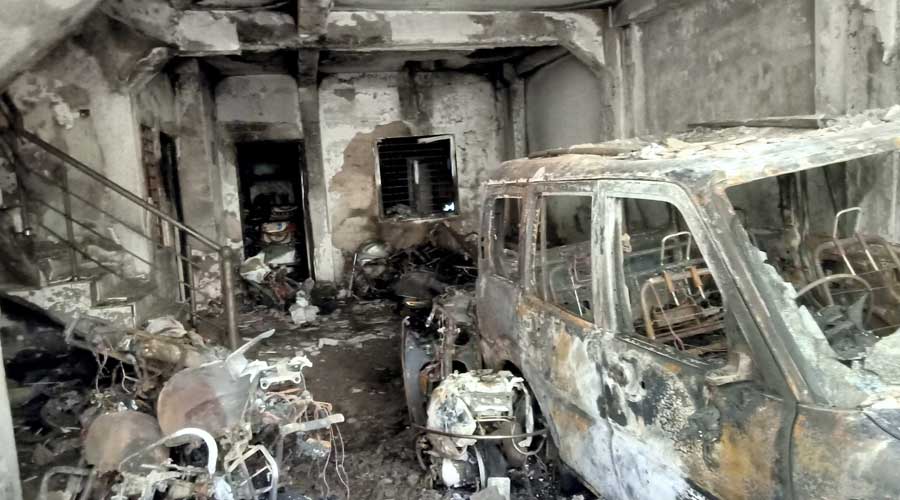 Seven persons were killed and nine others suffered injuries in a major fire that broke out in a three-storey residential building in Vijay Nagar locality of Indore early on Saturday, police said.

As per the preliminary information, the deceased included a woman, a senior police official said.

Talking to PTI, Indore Police Commissioner Hari Narayan Chari Mishra said there were several flats in the building that were rented out to people.

"Seven persons have died so far in the incident that occurred in the building situated in a congested area of Vijay Nagar locality. As per the preliminary information, the deceased include a woman," he said.

DCP Sampat Upadhyay said, "After the fire broke out, the area around the building's main door located on the ground floor and the staircase got enveloped in flames and black smoke, while the door that led to the terrace from the third floor turned extremely hot, due to which most of the people got trapped inside the building. Some persons rushed to the balcony of their flats to save themselves."

According to eyewitnesses, no fire safety arrangements were in place in the building when the blaze erupted.

When asked about this, police commissioner Mishra said that an FIR will be registered against the owner of the building under Indian Penal Code (IPC) section 304 (culpable homicide not amounting to murder).

The building's owner Ansar Patel has been detained by the police and a case has been registered against him for causing death by negligence, as no fire safety equipment was installed in the building which had one flat on each floor, NDTV reported.

Citing eyewitnesses,Vijay Nagar police station inspector Tehzeeb Qazi said a short circuit in the electric metre triggered the fire, which soon engulfed the vehicles in the parking area of the residential complex before it moved to the floors above.

Most of the victims died due to asphyxiation, he said, adding that there were around 16 people in the building when the incident occurred.

"The fire has been brought under control and a detailed investigation is on," Qazi said.

Madhya Pradesh Chief Minister Shivraj Singh Chouhan offered his condolences. "I pray to God to give place to the departed souls at his feet and give strength to the family members to bear this deep sorrow and to give speedy recovery to the injured," the Chief Minister tweeted.

A case was registered against a 27-year-old man late Saturday night for allegedly causing a devastating fire which claimed seven lives, police said.

Shubham Dixit (27), the absconding accused, allegedly torched a vehicle which belonged to a woman who had spurned him, police said.

After he set fire to the vehicle in the building's parking area early Saturday morning, the flames spread and engulfed the building, said a police official, adding that police have launched a manhunt for Dixit.