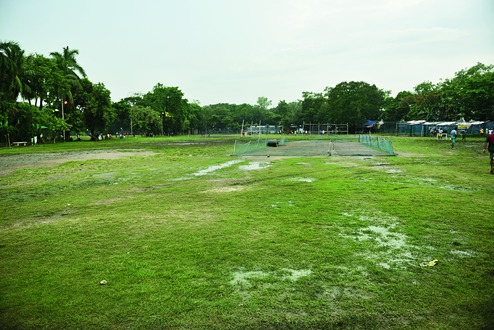 Calcutta: A young cricketer warming up with his mates before nets was struck by a bolt of lightning and killed in one of Calcutta's most popular coaching hubs on Sunday afternoon.

Debabrata Pal, 21, of Serampore in Hooghly district had joined the camp at Vivekananda Park barely a month ago because his parents would not let him play serious cricket until he had graduated.

Debabrata, a bowler who could bat, and several other trainees were going through their stretching routines when it began drizzling around 1.30pm. Some of his mates decided to take shelter inside the club tent but Debabrata and three others carried on.

Suddenly, there was a flash and a deafening noise, and Debabrata slowly collapsed to the ground.

Rahul Mondal, who was just a few feet away at the time, told The Telegraph that so strong was the impact that his head had begun spinning and he almost blacked out for a second or two.

"I remember seeing Debabrata collapse. He first went down on his knees and then slumped backwards in front of our eyes," Rahul said.

Gobinda Baidya, the mali (groundsman) at the Calcutta Cricket Academy, where the incident occurred, was having his lunch 50m from where the boys were warming up. He said the lightning strike lit up his entire room and the thunderclap that followed made him jump with a start.

Everyone took a while to realise what had happened. Then several boys came rushing out of the club tent, lifted Debabrata and took him inside.

"I felt his pulse; it was very feeble. But he was not breathing. I pumped his chest and tried to give mouth-to-mouth resuscitation. But he didn't respond," said Rahul, a Behala resident.

Debabrata was taken to the Ramakrishna Mission Seva Pratishthan, a short drive, in a car belonging to one of the trainees. Doctors there declared him dead on arrival.

"He was always good at cricket and his dream was to become a cricketer," said Bajradeepan Purakayasthya, who studied through school and college with Debabrata and used to travel with him from Serampore to Calcutta on most days.

"But he knew his parents would not support his joining a cricket academy until he had graduated. So, he joined the coaching camp after sitting his BCom finals."

Debabrata's parents arrived at the hospital a few hours later. His mother Chandana, a homemaker, was inconsolable and passed out several times. His father Dipak had retired last year from a private company.

One of the trainees, Subhojyoti Guha, said the boys often carried on playing amid light drizzles.

"The first bolt of lightning killed Debabrata. It was only very light rain till then," Guha said.

A doctor at the Seva Pratishthan said Debabrata's cricketing whites had got burnt at several places, including the shoulder and the knee. "The exact cause of death can be ascertained after the post-mortem, which will be conducted on Monday," he said.

Some of the trainees who returned to the academy from the hospital in the evening to collect their cricketing gear seemed in a daze.

Debabrata, the younger of two siblings, appeared in his BCom (Hons) exams from Shree Agrasain College in Liluah, Howrah. His elder sister works in Jalpaiguri, his uncle Sambhunath Pal said.