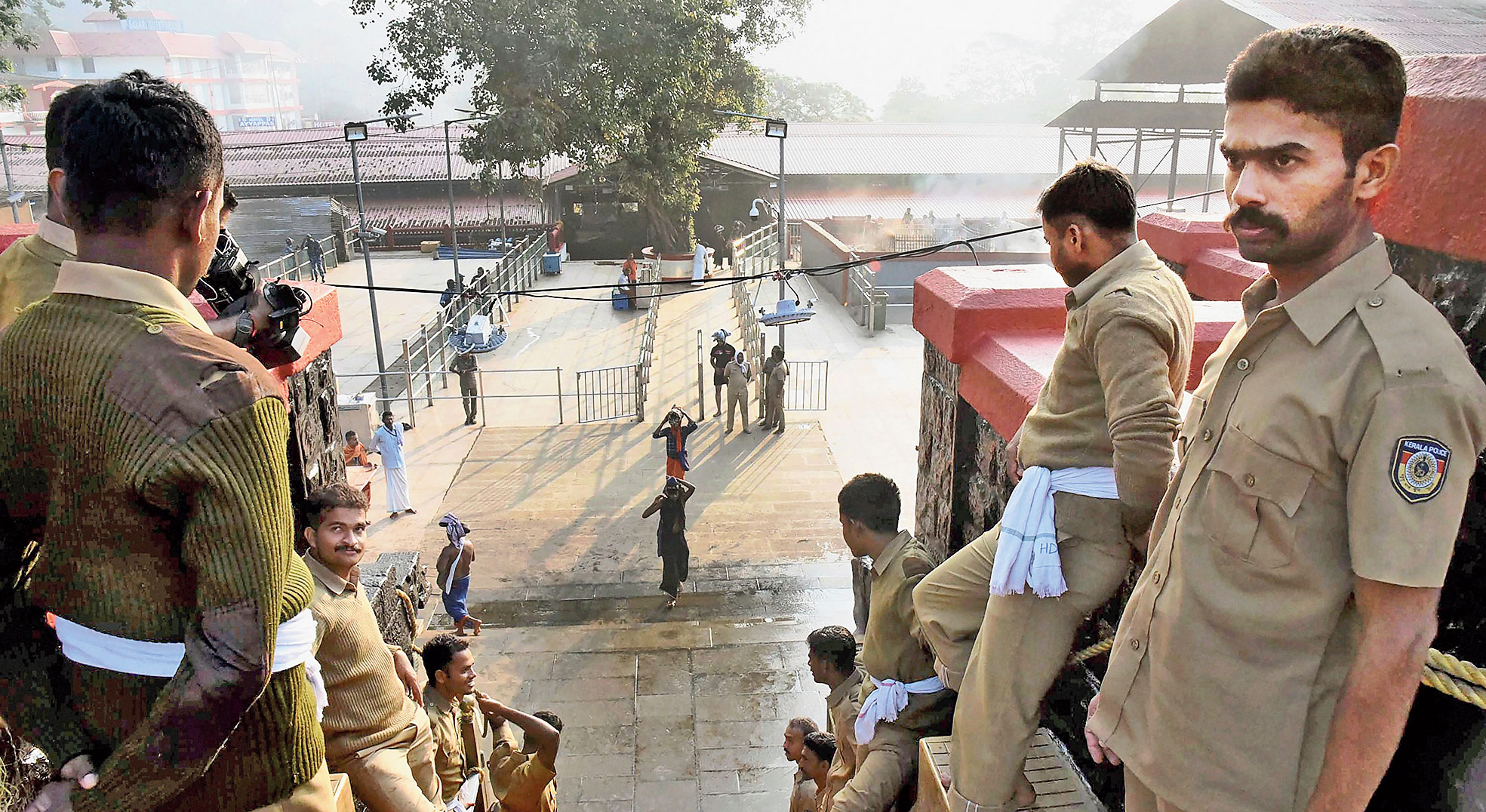 The BJP on Sunday decided to “intensify” its Sabarimala agitation after one of its general secretaries in Kerala, K. Surendran, was sent to judicial remand for defying police instructions on visiting the hilltop temple.

The leader, taken into preventive custody on Saturday evening, was produced before a magistrate who sent him to Kottarakkara sub-jail for 14 days.

State BJP chief P.S. Sreedharan Pillai told a media conference he had briefed the party’s central leaders about the developments.

“After consulting our central leaders, we will intensify our agitation,” he said.

Pillai had last week described the Sabarimala row as a “golden opportunity”. While the media were not allowed at that BJP youth wing event in Kozhikode, some Yuva Morcha members had filmed the speech and posted it on social media, without realising its potential for controversy.

Surendran had been taken into preventive custody on Saturday evening after he insisted on going to the temple despite officers asking him to wait till morning.

M.T. Ramesh, another general secretary, said the party has written to the Union home ministry and the party headquarters asking central leaders to visit the temple.

“Central (tourism) minister Alphons Kannanthamam is arriving on Monday to assess the facilities. He will be followed by Rajya Sabha members V. Muraleedharan and Suresh Gopi,” Ramesh said.

On Sunday, while being taken to court, Surendran accused the policemen of flinging away the “irumudikkettu”, puja essentials that he was carrying as all devotees do when they visit the temple.

“They flung my irumudikkettu and stamped on it,” he said, drawing a strong response from the Left Front government that denied the allegation.

The video clearly shows policemen trying to help Surendran, who appears to have bent down causing the bundle to slip.

The minister blasted the BJP leader for trying to whip up tension. “What kind of people are they? Police said Surendran himself dropped it,” said the minister who shares his name with the BJP leader.

“The RSS-BJP combine will not shy away from spreading such communal venom as part of their agenda to create tension.”

The BJP protested Surendran’s arrest by blocking highways in all the districts and giving motorists a harrowing time for the second consecutive day.

The Sangh parivar had enforced a shutdown across the state on Saturday after Hindu Aikyavedi president K.P. Sasikala Teacher, known for her inflammatory speeches, was taken into preventive custody.

She was arrested to prevent her from inciting mobs of “devotees” and parivar activists massed near the temple, watching out for any woman of childbearing age, and granted bail on Saturday itself.

No woman aged between 10 and 50 has yet been allowed to enter the temple since the Supreme Court lifted the age bar on September 28.

The temple and its surrounding areas were, however, free of protests on Sunday as the police kept a close watch on pilgrims. The multiple barricades at the “Sannidhanam”, the foreground near the temple, also helped.

Since the footfalls have yet to pick up, the pilgrims appeared content that they could spend more time at the sanctum sanctorum.

A. Padmakumar, president of the Travancore Devaswom Board that runs the temple, said the police would soon relax the strict control and allow the pilgrims free movement.

“All these are teething problems. We will improve all facilities in the coming days so that more pilgrims can pray at the temple,” he told reporters.

Congress leaders who trekked to the temple to take stock of the facilities were unhappy. “We don’t understand why the facilities at Pampa (from where pilgrims make the 5km trek to the shrine) was not repaired and spruced up three months after the floods,” senior leader Thiruvanchoor Radhakrishnan said.

The recent floods in the state had caused heavy damage to the infrastructure at Pampa. “All these restrictions indicate a police ‘raj’ in Sabarimala. I think the Left government wants to reduce the number of pilgrims,” he said.