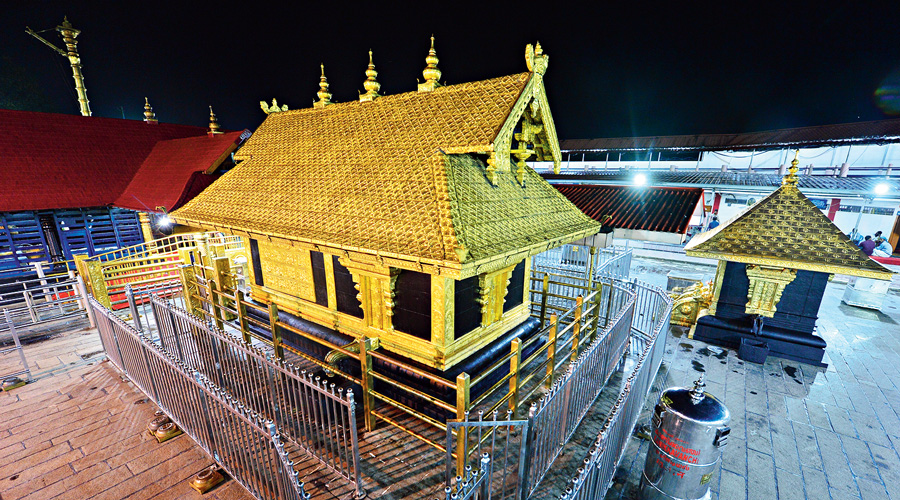 A spectre haunts the communists in Kerala, that of a hilltop temple to a celibate god.

The controversy over women’s entry into the Sabarimala temple is back in focus ahead of the April 6 Assembly polls, with a jittery Left making contradictory statements amid demands that all political parties state their position on the subject.

“It’s back in focus since all the political parties have started debating it,” P.G. Sasikumara Varma, member of the Pandalam royal family that was once the temple’s custodian and retains the responsibility for certain rituals there, told The Telegraph on Sunday.

“All political alliances should state their positions before the polls — that will give us believers some peace of mind.” For the Left, the subject represents anything but.

After the state government facilitated the entry of women of childbearing age into the shrine, following a September 2018 Supreme Court judgment removing the traditional age bar on women, the Left Democratic Front had got routed in the 2019 Lok Sabha polls.

The Congress-led United Democratic Front won 19 of the state’s 20 seats, and this was widely described as a “lesson” for the Left government for implementing the court verdict ignoring the violent protests by devotees and some Opposition activists.

The December 2020 local body polls, fought over local issues, provided a respite, with the Left winning at every level from the gram panchayats to the city corporations.

But the Sabarimala issue always simmered — fuelled by a raft of review petitions pending before a nine-member constitution bench — and has now resurfaced in the political arena ahead of the Assembly elections. The Left appears unsure how to handle it.

“The incidents that unfolded in the name of Sabarimala in 2018 should never have happened. It had pained everyone — me too,” Surendran, seeking re-election from Kazhakoottam, told reporters.

However, chief minister Pinarayi Vijayan later declared that even if the Supreme Court stood by its earlier judgment after considering the review petitions, his government would not do anything without consulting the believers.

The UDF, the BJP and the believers want something more — a withdrawal of the Left government’s affidavit in the Supreme Court that had paved the way for the 2018 judgment.

In 2007, the then Left government had placed an affidavit in the apex court saying it was against gender discrimination over entry to the temple. In February 2016, just before the last Assembly election, the then UDF government furnished a fresh affidavit backing the entry ban. However, in November 2016, the new Left administration reiterated the 2007 affidavit.

On Sunday, Congress leader Ramesh Chennithala sought clarity on the subject: “Will the government withdraw the affidavit or not? This is what the people should be told.”

Under pressure, some Left leaders have tried to play the issue down. “What is the need to discuss it every morning when Sabarimala is not an election issue?” CPI state secretary Kanam Rajendran told reporters.

But Varma, president of the Pandalam palace managing committee, insists that Sabarimala is very much an election issue. The usually reticent palace and its members had become a rallying point for the believers who hit the streets in 2018 against the implementation of the apex court judgment.

“I usually go to Sabarimala in a large group of 30-odd people. Four of them are Muslims, including a priest, and two are Christians. It’s one of the most secular temples, as all the pilgrims are required (by tradition) to visit a church and a mosque before entering the temple.”

Political observer N.P. Chekutty said the Sabarimala issue had not died down at all. “The larger Hindu community had put it on the back burner. Now being the most opportune moment, they have taken it up again,” he told this newspaper.

“Sabarimala was one of the reasons for the LDF’s debacle in the Lok Sabha polls, although the main reason was the people’s expectation of a Congress-led government helmed by Rahul Gandhi at the Centre,” he added.

He cited the powerful Nair Service Society’s criticism of the contradictory statements from CPM leaders.

“The chief minister now says he won’t take any decision without consulting the believers. But he had earlier (in 2018) said the government was on oath to implement court orders,” NSS general secretary G. Sukumaran Nair recently said.

“However, what their national general secretary said is contrary to all of this.”