Kejriwal scared of my son, using police to intimidate us: Bagga's father 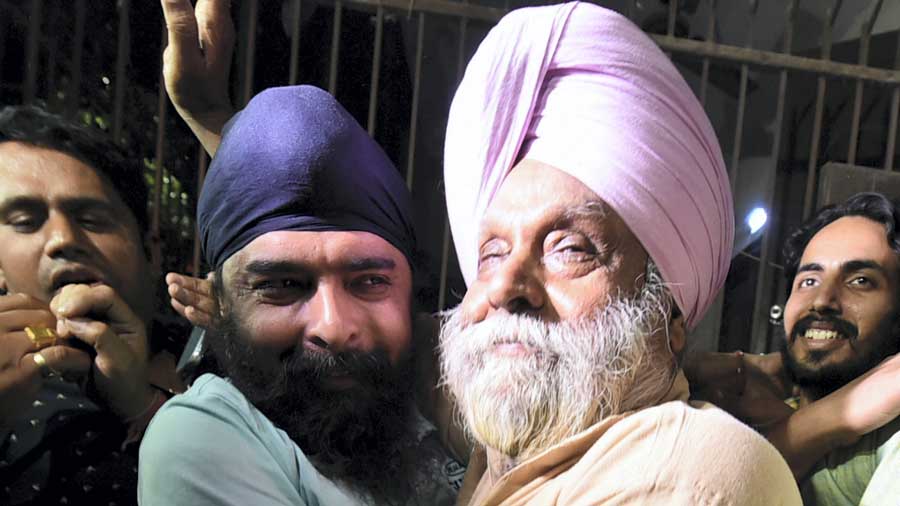 He said the last few days -- referring to Bagga's arrest by the Punjab Police from his residence on Friday and his subsequent release, and then a non-bailable arrest warrant issued against the BJP leader by a Mohali court the next day -- have been very tough for them but they are "prepared to fight for the truth".

Whatever is happening is for good and whatever will happen in the future will also be for good, Singh told PTI over phone.

He said they have got relief from the High Court in the non-bailable warrant issued against his son Saturday. My son is consulting lawyers and we will proceed according to their advice.

Hours after the Mohali court issued the arrest warrant in connection with a case registered against him by the Punjab Police last month, Bagga had moved the Punjab and Haryana High Court challenging it.

In a reprieve to Bagga, the HC Saturday night directed that no coercive step be taken against him.

Delhi Chief Minister Arvind Kejriwal is scared of Tajinder. This is not the first such incident. This has been going on for the last five to seven years. Even Aam Aadmi Party workers say Kejriwal gets nightmares about Bagga.

Earlier, he (Arvind Kejriwal) could not do anything since he did not have the police under him but now the Punjab Police is under them (AAP government) and they are using it to intimidate us, he alleged.

He said that they are prepared for such things .

"We know that this will continue. This will keep on going and more cases will be filed against my son," he said.

Thanking the Bharatiya Janata Party for standing by them during the last few days, he said the party gave them 100 per cent support .

"From ground workers to senior leaders, everyone supported us. Yesterday, Goa Chief Minister Pramod Sawant and BJYM president Tejasvi Surya met us. It is a matter of pride for us that a Chief Minister visited us. We will continue to fight for the truth, he said.

Pritpal Singh also said that they were getting a lot of support from the common man in Punajb and that the public opinion is in their favour.

Bagga's arrest in the case filed by AAP leader Sunny Ahluwalia at Mohali on April 1 witnessed the Punjab Police pitted against their counterparts from Haryana and Delhi.

The Delhi Police has filed a case of kidnapping over his arrest. As Punjab Police was taking him to AAP-ruled state, they were stopped by their Haryana counterparts.

Bagga was later brought to the national capital by the Delhi Police, taken to the DDU hospital as a medico-legal Case (MLC) before being produced in front of a Dwarka court magistrate.