No coercive step to be taken till May 10, says counsel Chetan Mittal 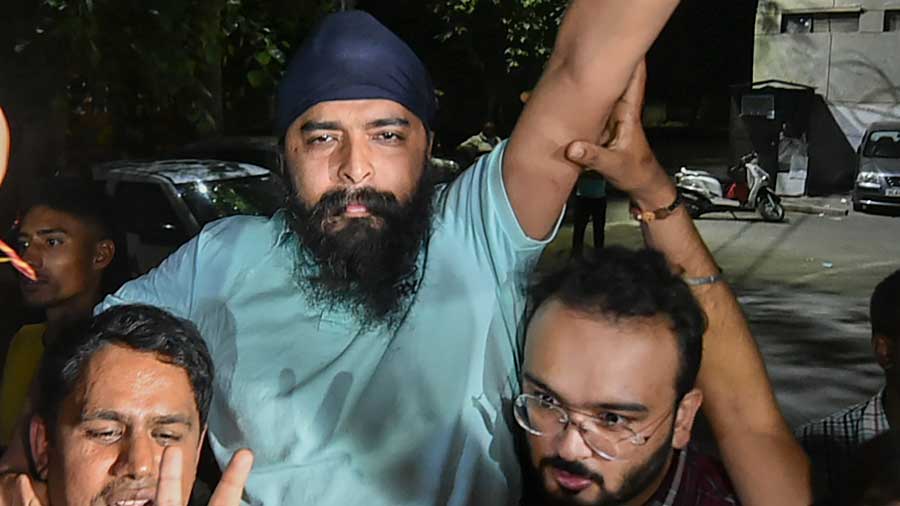 In a late-night relief, the Punjab and Haryana High Court stayed a fresh arrest warrant against BJP leader Tajinder Pal Singh Bagga whose dramatic arrest by the Punjab Police and subsequent release triggered an intense political slugfest between the AAP and the BJP on Saturday.

Justice Anoop Chitkara took up Bagga's petition in an urgent hearing at his residence just before midnight and directed that no coercive steps be taken against him till May 10, hours after a Mohali court issued the non-bailable arrest warrant, the BJP leader's counsel Chetan Mittal said.

In the political arena, the slugfest between the AAP and the BJP escalated into protests and name-calling.

Back home in the early hours of Saturday, Bagga, surrounded by family members and friends at his Janakpuri residence, tore into the Aam Aadmi Party and its chief Arvind Kejriwal over his arrest, accusing him of pursuing political vendetta through police in Punjab.

"No matter one or 100 FIRs are registered against me, I will keep raising issues of dishonouring of the Guru Granth Sahib and Kejriwal's insult to Kashmiri Pandits," he said.

"They (the AAP) are attacking me because I am raising my voice against the AAP and its chief Kejriwal," he said.

BJP leaders also protested outside the residence of the Delhi Chief Minister, calling him a "dictator".

The AAP accused the BJP and its governments of protecting its "goon" who incited riots in Punjab.

Bagga's arrest in the case filed by AAP leader Sunny Ahluwalia at Mohali on April 1 witnessed the Punjab Police pitted against their counterparts from Haryana and Delhi.

The Delhi Police has filed a case of kidnapping over his arrest. As Punjab Police was taking him to AAP-ruled state, they were stopped by their Haryana counterparts. Bagga was later brought to the national capital by the Delhi Police, taken to the DDU hospital as a Medico-Legal-Case (MLC) before being produced in front of a Dwarka court magistrate.

"The medical examination revealed injury marks on his body, the Delhi Police said on Saturday. "Bagga expressed apprehension over his safety and security. We will do necessary security arrangements," a senior officer said.

Bagga claimed that while he was being taken to Punjab after his arrest, the police tried to persuade him not to raise issues pertaining to dishonouring of Guru Granth Sahib and The Kashmir Files movie. "They told me why I was getting myself involved with matters of other state when I lived in Delhi."

Delhi BJP chief Adesh Gupta alleged that with Bagga's arrest, it was clear that the Aam Aadmi Party's national convener had "misused" the Punjab Police for personal benefit.

"Kejriwal is a dictator. What was Bagga's crime? He just asked for Kejriwal's clarification on his remarks on '(The) Kashmir Files'. He was not allowed to wear a turban during the arrest," he said. "The BJP will not tolerate the insult to the turban."

The National Commission for Minorities (NCM) also sought a report from Punjab chief secretary within seven days on allegations that Bagga was not allowed to wear a turban while being arrested by Punjab police.

Delhi Deputy Chief Minister Manish Sisodia alleged the entire BJP and its governments are engaged in saving one of their "goons who spoke against the brotherhood in Punjab and incited riots".

"The BJP is a party of goons which makes even its government do the job of goons. Never even by mistake, these people talk about education, health, inflation and unemployment," he tweeted in Hindi.

But even as Bagga and the BJP launched tirades against the AAP, a court in Mohali issued a non-bailable arrest warrant against Bagga for allegedly promoting enmity between different groups on grounds of religion and criminal intimidation), among other charges.

The arrest warrant was issued by the court of Judicial Magistrate Ravtesh Inderjit Singh.

Soon after, Bagga moved the high court and secured relief.

Also, the Punjab government Saturday moved two applications before the Punjab and Haryana High Court, seeking the Centre and the Delhi Police chief be made parties to the arrest case, and that the May 6 CCTV footage of Janakpuri and Kurukshetra police stations be preserved.

The Punjab government has alleged that its police personnel were "detained" at Janakpuri and Kurukshetra police stations when they had gone to arrest Bagga.

After the hearing, the Delhi Police counsel alleged the Punjab Police did not follow laid down procedure while arresting Bagga, a claim rejected by the Pujab government counsel.

"The Punjab Police did not consult us or inform us before taking Mr Bagga into custody. Those who had gone there (to Bagga's home in Delhi) they were also not in uniform, they were in plainclothes," said Additional Solicitor General of India Satya Pal Jain, who represented the Delhi Police.

Punjab government counsel Poneet Bali told reporters outside the high court on Saturday that Bagga was served notices on five occasions, but he did not respond.

"The Punjab police has every right to arrest an accused," he said.

The hearing in the case was adjourned for May 10.

While referring to the kidnapping complaint, the counsel claimed the Delhi Police obtained a search warrant from a court without disclosing the fact that Bagga is an accused in a case and he has been arrested.

"So, whatever is the future course of action as far as Mr Bagga is concerned will definitely be taken."

"Such anti-social elements should get punishment as per the law of the land, but unfortunately the country's government is coming out in his support," he alleged.

"...This country will run according to law, Constitution, and not in an autocratic manner," Kang said.

The Congress also entered the debate with its leader P Chidambaram saying police serving their political masters will lead to the "ultimate breakdown" of federalism.

No coercive step to be taken against Tajinder Bagga: High Court

In a reprieve for Tajinder Pal Singh Bagga, the Punjab and Haryana High Court Saturday night directed that no coercive step be taken against the Delhi BJP leader after he sought a stay on the arrest warrant issued by a Mohali court earlier in the day.

Hours after the Mohali court issued the arrest warrant in connection with a case registered against him by the Punjab Police last month, Bagga moved the high court challenging it.

Justice Anoop Chitkara took up Bagga's petition in an urgent hearing at his residence just before midnight.

"No coercive steps till May 10," said Bagga's counsel Chetan Mittal on the high court order.

Notably, on May 10, the high court is to take up Bagga's petition, seeking quashing of the FIR registered against him last month.

Mittal said that the court stayed the arrest warrant.

The hearing took place for around 45 minutes, said Mittal.

Earlier in the day, the court of Judicial Magistrate Ravtesh Inderjit Singh issued the arrest warrant against Bagga in connection with a case registered last month.

The Punjab Police had booked Tajinder Pal Singh Bagga on the charges of making provocative statements, promoting enmity and criminal intimidation. The case was registered on a complaint of AAP leader Sunny Ahluwalia, a resident of Mohali.

The FIR registered on April 1 referred to Bagga's remarks on March 30, when he was part of a BJP youth wing protest outside the residence of Delhi Chief Minister Arvind Kejriwal.

Bagga was booked under relevant sections, including 153-A (promoting enmity between different groups on grounds of religion, race, place etc), 505 (whoever makes, publishes or circulates any statement, rumour or report) and 506 (criminal intimidation), of the Indian Penal Code.

Bagga was arrested by the Punjab Police from his Delhi home on Friday, stopped in Haryana while being taken to Punjab and brought back to the national capital by Delhi Police hours later.