If farmers want, they can change government: Telangana CM 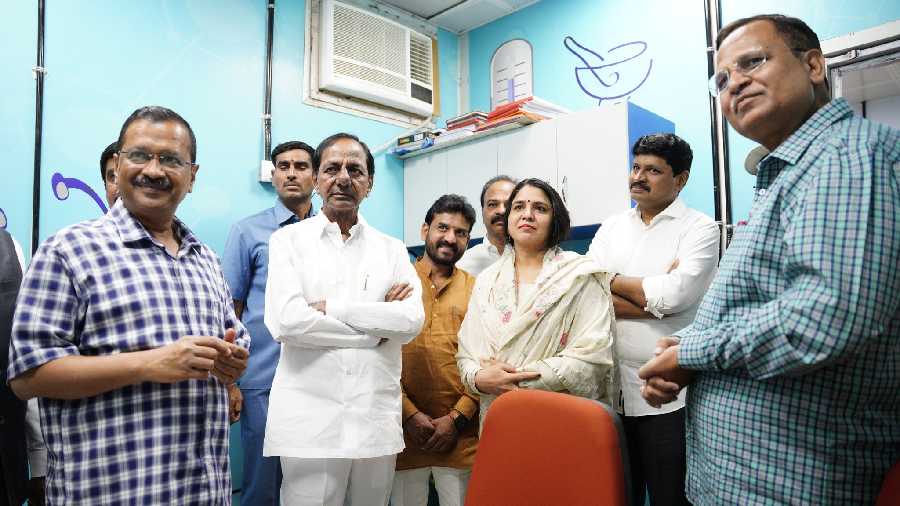 Telangana Chief Minister K Chandrashekar Rao on Sunday here said farmers can change government if they want and they should keep fighting till they get a constitutional guarantee for remunerative prices of their crops.

The Telangana chief minister also paid tributes to the farmers who died during the course of the agitation against the Centre's now-repealed farm laws.

He bows to farmers for their grit and determination, the CM said referring to the year-long stir that ended last year.

"If farmers want, they can change government. It is not a big thing. From where the power comes, it comes from us. Agitation should continue till farmers get the right price and there is a constitutional guarantee for it," he said.

Rao also lauded the contribution of Punjab to the freedom struggle and bringing green revolution in the farming sector. "Punjab is a great state," said Rao.

Rao was here to distribute Rs 3 lakh as financial assistance to the kin of the farmers, who died during the stir against the Centre's three farm laws.

Over 700 farmers had died during the course of the agitation at the Delhi borders due to various reasons, including harsh winter, road accidents, cardiac arrest and ailments.

"Bow to farmers for their grit, keep fighting to get remunerative prices," says Telangana CM K Chandrashekar Rao in Chandigarh

"If farmers want, they can change government; it is not big thing," added Telangana chief minister.

The meeting between Kejriwal and Rao, heading two regional outfits -- Aam Aadmi Party and Telangana Rashtra Samithi -- respectively, assumes significance in the wake of building political equations ahead of the 2024 Lok Sabha polls to challenge the BJP.

The two chief ministers had lunch together and discussed various issues, including the current political situation in the country. Later, they left for Chandigarh, officials in the Delhi government said.

Kejriwal and Rao, along with Punjab Chief Minister Bhagwant Mann, are scheduled to pay tributes to the martyrs of the Galwan Valley clash against the Chinese troops and the farmers who died during the anti-farm law stir last year, in Chandigarh later in the day.

On Saturday, the Telangana chief minister, accompanied by Kejriwal, had visited schools and Mohalla clinics of the Delhi government. He had also met Samajwadi Party chief Akhilesh Yadav.