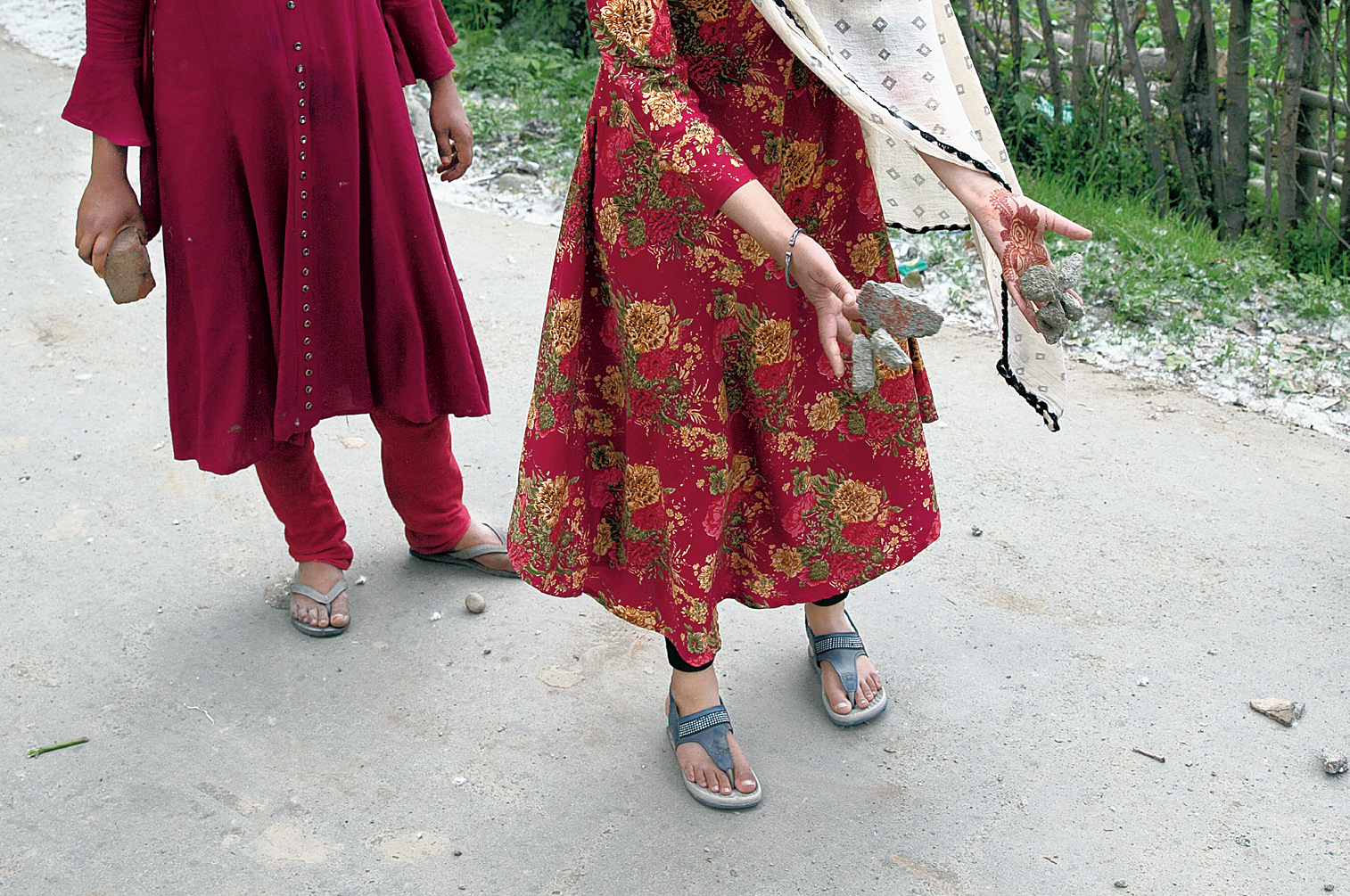 A Kashmiri villager drops stones on the road, collecting them for men to throw at security personnel during a protest against the killing of the youth on Wednesday.
(AP)
Muzaffar Raina   |   Srinagar   |   Published 13.05.20, 11:04 PM

A young man died after being shot at by a CRPF jawan for allegedly jumping checkposts on the outskirts of Srinagar on Wednesday during the lockdown, triggering protests by residents.

The CRPF and the local police made conflicting statements on Peer Mehrajuddin, 25, with the central paramilitary force hinting at a possible sabotage attempt targeting the army while the local cops saying the shots were fired as the youth had not stopped his car at two checkposts despite warnings.

Local residents, however, alleged cold-blooded murder, claiming that the CRPF opened fire on Mehrajuddin although he had stopped and told them that he had an emergency.

A Kashmir politician pointed out that nothing could justify the firing targeted at the youth as the forces could have aimed at the tyres of his car if they had to stop him.

Clashes broke out between protesters and security forces after the death of Mehrajuddin, a resident of Makhama village, in the firing at the Kawoosa crossing on the outskirts of Srinagar. The authorities snapped Internet services in Budgam district, where Makhama is located, to prevent further flare-up.

The killing came on a day policemen were caught on camera damaging shops and houses in Budgam and making a bonfire of goods from a shop, reportedly after a mob injured an officer when he tried to stop Friday prayers.

There have been allegations that the security forces are using brute tactics to enforce the lockdown in Kashmir.

A statement issued by the CRPF said Mehrajuddin, several of whose close relatives are said to be in the police force, was driving a Maruti Suzuki WagonR and had jumped two checkpoints on Gulmarg-Narbal road when an army convoy was nearby.

“A convoy of the army, at that point in time, was passing through the adjacent road. Fearing sabotage, the CRPF jawan of C/141, manning this naka, fired warning shots. This civil car was driving in the wrong direction of the road and that was even more alarming,” a CRPF spokesman said.

“When the car didn’t stop despite warning shots, the jawan fired at the car and the driver was hit on his left shoulder. Subsequently, he was shifted to SHMS Hospital, Srinagar, where, he was declared brought dead by doctors,” the spokesperson added.

“The naka party opened fire at the vehicle to thwart the attempt (of jumping the checkpost)…. The police have registered a case and started an investigation into the matter,” the statement said.

Protests broke out at several places, with angry youths clashing with security forces at Auduna and Kawoosa villages of Budgam.

Political parties demanded a probe and punishment for the guilty.

“Even if the claims of the forces are true that the slain civilian jumped a checkpoint, the CRPF men could have fired at the tyres of the vehicle he was driving instead of shooting him…,” Tarigami said.

“How long will civilian killings continue in Kashmir? Unarmed civilians getting killed are extremely unfortunate and condemnable. Stop it now,” the leader added.

Locals alleged that the police were exacting revenge on villagers for the injury of a deputy superintendent of police on Friday. He was injured when he reportedly tried to stop people from gathering for Friday prayers amid the Covid restrictions.

In the video, policemen can be seen taking out goods from a shop and burning them. It appears that the family filming the video was also targeted as shrieks can be heard before the clip ends abruptly.

Villagers alleged that cops have been raiding their houses for the past several days, damaging interiors and cars.