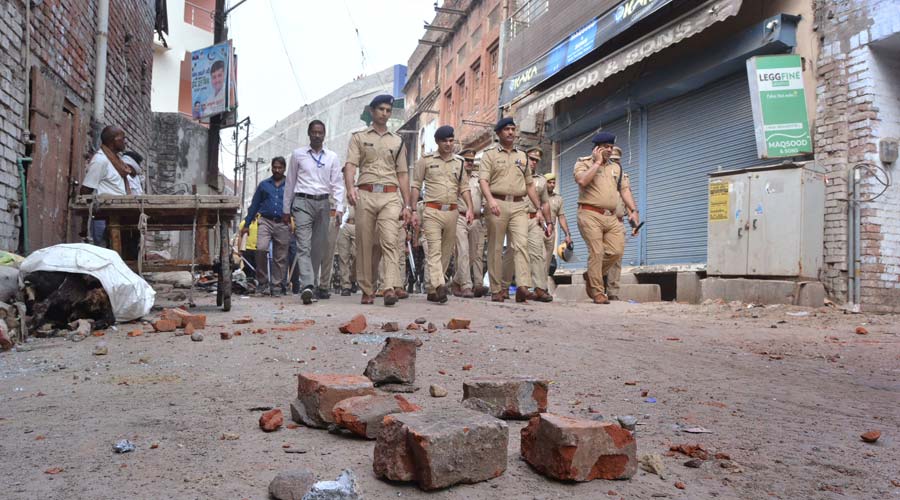 Police conduct flag march in a locality, a day after clashes broke out between two groups over market shutdown, in Kanpur on Saturday.
PTI Photo
Our Bureau, PTI   |   Lucknow   |   Published 04.06.22, 11:58 AM

Bahujan Samaj Party supremo Mayawati Saturday attacked the state government over the violence and stone-pelting in Kanpur, asking the BJP dispensation to take action against the culprits "by rising above religion, caste and party politics".

Bombs were hurled and gunshots fired during the violence as members of a group attempted to shut shops over alleged insulting remarks made by BJP spokesperson Nupur Sharma during a television debate recently, a senior police official said.

In a tweet Saturday, Mayawati said, "Riots and violence that erupted in Kanpur during the visit of the president and the prime minister to Uttar Pradesh is very sad, unfortunate and worrying and also a sign of the failure of the police intelligence.

"The government has to understand that in the absence of law and order, how investment and development are possible in the state?" she said.

She said the government should take strict legal action against the culprits "by rising above religion, caste and party politics and conduct an independent and impartial high-level inquiry".

She also appealed to people to avoid provocative speeches and maintain law and order, and peace.

According to senior police officials, the situation in Kanpur is under control on Saturday morning, but heavy police force has been deployed in the violence-hit areas.

Police have initiated investigation and arrested at least 18 people.