BJP leader from Madhya Pradesh offers prayers at a temple 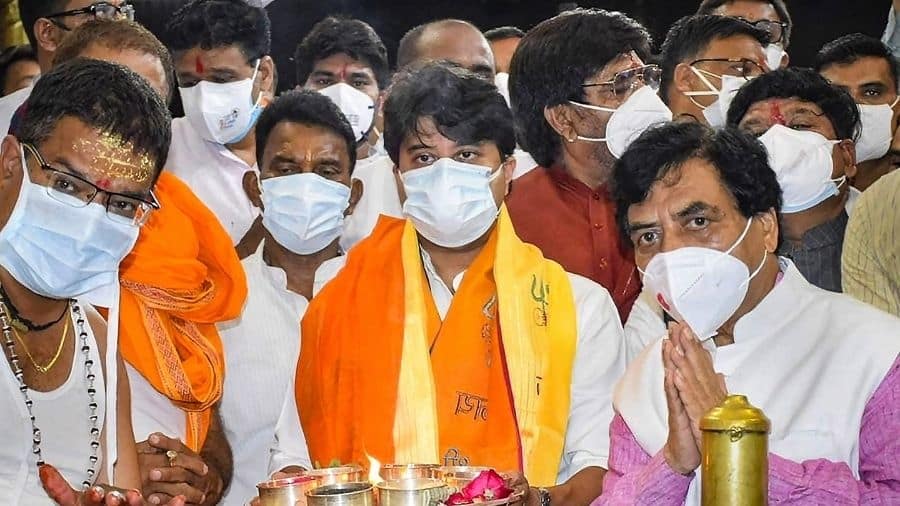 Amid buzz around Union cabinet expansion, BJP's Rajya Sabha MP Jyotiraditya Scindia on Tuesday cut short his tour of the Malwa-Nimar region in Madhya Pradesh and took off for Delhi from the Indore airport after taking darshan of the famous Mahakaleshwar temple in Ujjain.

Many workers of BJP and local leaders were present at the Devi Ahilyabai Holkar airport when Scindia reached there. He was seen greeting them with folded hands.

"My Ujjain tour is over and I am leaving for Delhi now. I will return next week," Scindia told reporters.

Scindia, however, remained tight-lipped about speculations that he might be inducted in the Union cabinet during its expansion and said he had no information about the same.

Scindia embarked on a three-day tour of the Malwa-Nimar region on Sunday and he was supposed to leave for Delhi on Wednesday morning as per the earlier schedule.

Earlier in the day, when reporters asked Scindia in Indore whether he will get a berth in the Union cabinet, he merely said that he was leaving to attend his next programme.

Scindia paid tribute along with other BJP leaders at the statue of Bharatiya Jana Sangh founder Syamaprasad Mookerjee on his 120th birth anniversary in Indore.

Meanwhile, when asked about speculations about Scindia joining the Union council of ministers, Congress Rajya Sabha MP Digvijaya Singh said, "Many congratulations to him if he is being inducted as a minister in the Central government .

In March 2020, 22 MLAs of Congress led by Scindia resigned from the party and crossed over to the BJP, leading to the collapse of the then Kamal Nath-led government in Madhya Pradesh, which paved the way for the BJP to return to power again.