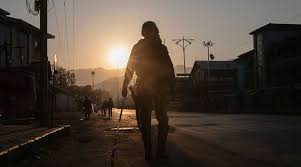 The families, protesting outside the police control room, said one of the three had left home to apply for admission in a university while another was a Class XI student
Shutterstock
Muzaffar Raina   |   Srinagar   |   Published 31.12.20, 01:36 AM

A purported gunfight in Srinagar in which security forces claimed to have killed three militants has come under question with some wailing families saying they were innocent and had been taken out in a fake encounter.

The families, protesting outside the police control room, said one of the three had left home to apply for admission in a university while another was a Class XI student.

The allegations come days after police filed a chargesheet in the Shopian chief judicial magistrate’s court against an officer, Captain Bhoopendra Singh of 62 Rashtriya Rifles, for allegedly staging an “encounter” in July in which three men from Jammu’s Rajouri looking for jobs in Shopian were killed in cold blood after being branded militants.

The chargesheet accuses the officer of staging the gunfight to claim the Rs 20 lakh reward placed on the heads of certain militants.

On Wednesday, security forces claimed to have killed three militants in an overnight gunfight in Srinagar’s outskirts at Hokersar off the Srinagar-Baramulla highway.

Major General H.S. Sahi, general officer commanding of the counter-insurgency Kilo Force, said the “three militants” were killed in a gunfight that started on Tuesday evening following inputs about the presence of insurgents in the area.

Sahi said the three were carrying a lot of ammunition, which suggested they were planning a big terror strike on the highway.

“We were getting continuous inputs that terrorists were planning a big terror activity. All agencies and security forces were building up inputs. When reports came yesterday, the building was cordoned off and the terrorists were asked to surrender,” the officer told a media conference.

“After appealing for long, one terrorist tried to come out of the building but the moment he did so, his associates opened fire and lobbed grenades and called him in.”

Sahi said the operation was suspended during the night but a tight cordon remained in place. The three were allegedly killed in the gunfight that resumed in the morning and ended by 11.30am, he added.

The officer said the police were trying to ascertain the identities of the trio.

In a few hours, some families from Pulwama and Shopian arrived at the police control room in Srinagar, crying and accusing the forces of killing innocent youths.

“He was not a mujahid (militant). He was just studying in Class XI. Oh my God, what will I do?” wailed a woman who identified herself as the mother of Athar Mushtaq, the youngest of the three.

A sister of Aijaz Ahmad, who is among the dead, said he had left home to fill up forms for university admission. “At 3.01pm (on Tuesday), he called us up to say that he might stay the night (in Srinagar city) as it would take time to write some exams. We could not contact him through the night,” she said.

“Today, my papa, who is in the police, called us up to say that Aijaz has been martyred.”

Another relative said Aijaz had stepped out of home on Tuesday for the first time in two months as he had been ill.

The third person killed was identified by relatives as Zubair Ahmad.

The families said there were no FIRs registered against them, suggesting they were not militants.

“They have extinguished the lamp of my house. Oh God, where will I get justice?” a man was heard crying aloud near the police control room.

“Worrying that in the past few months after the Shopian fake encounter other families too in J&K have alleged that their sons were innocent & killed in staged encounters. Authorities need to come clean on this,” Mehbooba tweeted.