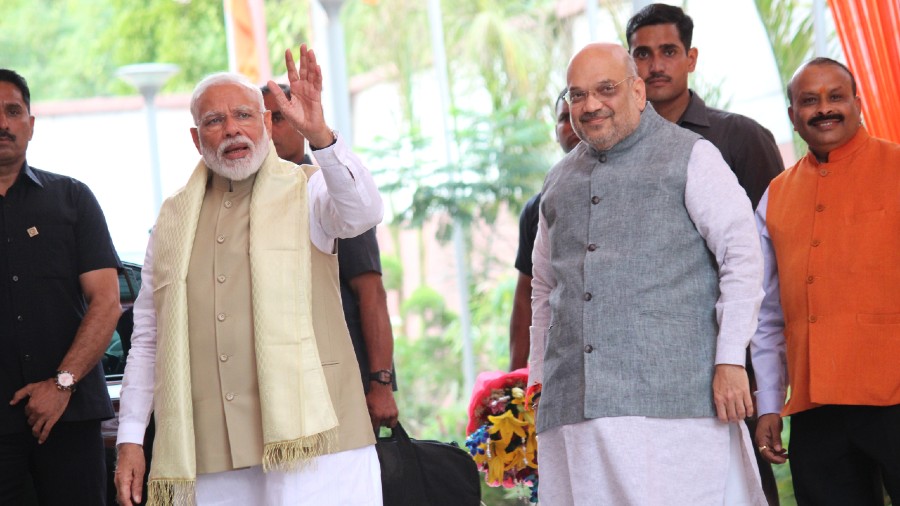 Union Home Minister Amit Shah on Thursday said India under the leadership of Prime Minister Narendra Modi successfully fought the battle against COVID-19 and managed to bring disease curve down with the help of 135 crore citizens.

"Now, the cases are dipping, the number of patients is decreasing. The oxygen requirement has come down to 3,500 MT from 10,000 MT. This indicates that the COVID-19 curve is going down," Shah said.

He also said the speed of India's vaccination drive is the fastest in the world and it will further gain momentum in future to cover maximum number of people in the shortest possible time, as envisioned by the PM.

The plants have been set up by an NGO - Vallabh Youth Organisation - at government-run hospitals in Tilakvada, Sagbara, Ahmedabad (Sola civil), Daskroi in Ahmedabad district, Kalavad, Kapadvanj, Bhanwad, Mehsana and Porbandar.

Shah said the government succeeded in controlling the spread of the virus and bringing the curve down through collective efforts.

"As you might have seen in media (reports), even highly developed countries struggled to tackle the pandemic.

On the other side, we fought the battle with patience and planning," he said.

He said in other countries, only governments were fighting against the coronavirus.

"In India, along with the government, 135 crore citizens also fought this battle under the leadership of PM Narendra Modi. This is the reason for our success," said Shah.

He paid tributes to all those who lost their lives due to the coronavirus.

The minister also thanked frontline workers, doctors, nurses, NGOs and volunteers for helping the people in their hour of need.

"Non-governmental organisations helped people in all possible ways. When migrants were going back home (last year), NGOs provided them food, water, shelter and helped them reach their destinations. The government could not have done it all alone," he said.

As the new COVID-19 cases (per day) are coming down, Shah said the demand for medical oxygen is also decreasing.

As against the daily demand of 1,000 metric tonnes of oxygen in the country earlier, the demand suddenly shot up to 10,000 MT during the second wave of COVID-19, he said.

The Centre pressed into service trains and defence aircraft to transport medical oxygen and cryogenic tankers across the country to save the lives of COVID-19 patients when the demand for the life-saving gas was very high, he noted.

"While 15,000 MT of oxygen was transported through trains, cryogenic tankers for oxygen storage were transported using Army aircraft," he said.

Shah further said that while 162 PSA oxygen plants were approved under the PM Cares Fund after the first wave of COVID-19, another 1,051 were approved this year.

Centre purchased one lakh oxygen concentrators through the PM Cares Fund, he said.