Speaking at the silver jubilee event of TRAI, the PM said it is estimated that the 5G network rollout will add USD 450 billion to the Indian economy 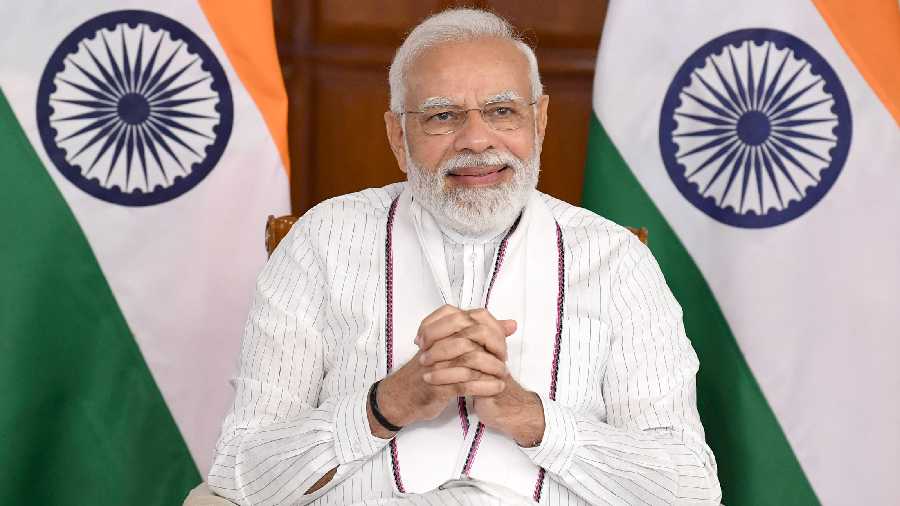 India is targeting the rollout of 6G telecom network, which will provide ultra high speed internet connectivity, by the end of the decade, Prime Minister Narendra Modi said on Tuesday.

India currently has 3G and 4G telecom networks and companies are gearing up to launch 5G over the next few months.

Speaking at the silver jubilee event of telecom sector regulator TRAI here, he said it is estimated that the 5G network rollout will add USD 450 billion to the Indian economy.

"This is not just increasing internet speed but also the pace of development and creating jobs," he said, adding the 5G technology will bring positive change in governance of the country, ease of living and ease of doing business.

It will boost growth in agriculture, health, education, infrastructure and logistics, he said.

Connectivity, Modi said, will decide the progress of the country in the 21st century and so modern day infrastructure needs to be rolled out.

According to the prime minister, a task force has started work on rolling out the 6G network by the end of the decade.

Taking potshots at the previous Congress-led UPA government, Modi said the 2G era was symbolic of policy paralysis and corruption.

The country, under his government, has moved transparently to 4G and is now going to 5G and TRAI has played a very important role in this transition, Modi said.

The prime minister said that whenever the industry has faced challenges like retrospective tax or adjusted gross revenue, then his government has responded to the crisis expeditiously and undertaken reforms wherever required.

"These efforts have created new trust. The result of this is that over one-and-a-half times more FDI in the telecom sector has come in the last 8 years compared to the amount that came into the country before 2014," Modi said.

The prime minister also said that his government has encouraged healthy competition that has led to India having one of the cheapest telecom data charges in the world.

Indigenous 5G test bed in telecom sector is an important step in India's self-reliance, he added.

Telecom minister Ashwani Vaishnaw said the country's scientists and engineers have developed a complete 4G stack which is ready for deployment by the BSNL and the 5G stack is at an advanced stage of development.

"By the end of this year, we should see our indigenously developed 5G technology stack," Vaishnaw said.

He also said that reforms will be carried out at the spectrum management arm of the Department of Telecom -- Wireless Planning Commission -- by the end of this month.

Minister of State for Communications Devusinh Chauhan said that indigenously developed 4G telecom gears will be deployed in BSNL network by end of this year.

Trai Chairman PD Vaghela said the implementation of the regulator's recommendation on 5G services and launching of 5G test for industry and startups will create new venues for all the vertical sectors leading to overall economic growth.

He said that going forward, it will be important for regulators to share and co-create infrastructure for reducing cost of services rollout and TRAI has started collaborating with infrastructure regulators.

I&B secretary Apurva Chandra said that while there has been consolidation in the telecom sector, the broadcasting segment is a new entrant almost every day.

He said the media and entertainment industry is expected to grow to USD 70 billion by 2030 from USD 25 billion and TRAI as a broadcasting regulator will have to play an important role in steering this growth.

The testbed has been set up at a cost of around Rs 220 crore.

Speaking at the silver jubilee celebrations of the Telecom Regulatory Authority of India (Trai), the Prime Minister said the 5G testbed is an important step for self-reliance in the direction of critical and modern technologies.

The 5G testbed has been developed as a multi-institute collaborative project by eight institutes led by IIT Madras.

In the absence of a 5G testbed, startups and other industry players were required to go abroad to test and validate their products for installation in a 5G network.

The testbed facility will be available at 5 different locations.