Advertisement
Home / India / If I was to be transferred… fine: Justice Muralidhar

If I was to be transferred… fine: Justice Muralidhar 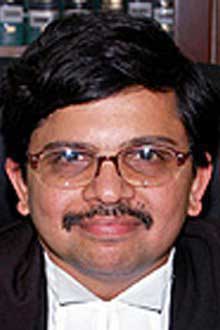 Justice S. Muralidhar on Thursday spoke about his midnight transfer from Delhi High Court, revealing he had earlier replied to a communication from Chief Justice of India S.A. Bobde saying he had no objection to the transfer proposal.

“If I was to be transferred from Delhi High Court anyway, I was fine with moving to Punjab and Haryana High Court,” Justice Muralidhar said.

The Centre had issued the notification close to midnight — hours after Justice Muralidhar had on February 26 asked Delhi police to take a “conscious decision” on registering FIRs by the next day against three BJP leaders accused of making hate speeches ahead of the recent riots.

Justice Muralidhar, 58, who received a grand farewell on Thursday from a huge gathering that included judges and lawyers, said he wanted to clear the confusion about his transfer.

He said the five-member Supreme Court collegium, headed by the CJI, had at a February 12 meeting recommended his transfer. Justice Muralidhar was number three in Delhi High Court, his parent high court.

“The collegium’s decision was communicated to me by the CJI on February 17 by a letter which sought my response. I acknowledged receipt of the letter. I was then asked to clarify what I meant. As I saw it, if I was to be transferred from Delhi High Court anyway, I was fine with moving to Punjab and Haryana High Court,” Justice Muralidhar said.

“I therefore clarified to the CJI that I did not object to the proposal. An explanation for my transfer reached the press... on February 20 quoting ‘sources in the Supreme Court collegium’, confirming what had been indicated to me a couple of days earlier.”

The judge said the midnight notification had done two things. “First, it transferred me to Punjab and Haryana High Court. Second, it appointed me to a position from where I can never be transferred or removed and in which I shall always be proud to remain: a ‘former judge’ of arguably the best high court in the country — the high court of Delhi.”

He received a standing ovation from all the judges, former judges, lawyers, court staff and journalists at the gathering, in the presence of his family members.

Justice Bobde’s letter, dated February 14, had been delivered to Justice Muralidhar on February 17, the day his pet Labrador, Sakhi, died.

Justice Muralidhar said that February 26 was perhaps the longest working day of his life as a judge of Delhi High Court, where he had spent 14 years.

He said the day began at 12.30am with a sitting at his residence with Justice A.J. Bhambhani, at the behest of Justice G.S. Sistani, to deal with a public interest plea moved by petitioner Rahul Roy seeking safe passage for ambulances carrying injured riot victims.

“When I received a call at my residence from the lawyer for the petitioner, I first called Justice Sistani to ask what should be done, knowing that the chief justice was on leave. Justice Sistani explained that he too was officially on leave the whole of February 26 and that I should take up the matter,” Justice Muralidhar said.

“This fact is stated in the order passed by the bench after the hearing. Later that day, upon urgent mentioning, as the de facto CJ’s bench, Justice Talwant Singh and I took up another fresh PIL on the CJ’s board seeking registration of FIRs for hate speeches. After the orders passed on that day, the above two PILs remained on the CJ’s board.”

Before the court-organised farewell, the Delhi High Court Bar Association too had held a similar event for Justice Muralidhar on Thursday.

There, the judge concluded his address saying: “When justice has to triumph, it will triumph.... Be with the truth, justice will be done.”

In 2018, Justice Muralidhar had directed the release of rights activist Gautam Navlakha from house arrest in the Bhima Koregaon case, quashing a transit remand ordered by a trial court.

In October 2018, a division bench headed by Justice Muralidhar had convicted 16 former Uttar Pradesh policemen in the 1987 Hashimpura massacre of 42 Muslim youths. He had also headed the bench that in the same year awarded a life term to Congress politician Sajjan Kumar for the 1984 Sikh massacre.

Justice Muralidhar said the most moving moment for him as a Delhi High Court judge had come on July 2, 2009, when a bench involving him decriminalised gay sex between two consenting adults.

He said that at the time of pronouncing the judgment, he and then Delhi Chief Justice A.P. Shah knew that something “irreversible” had happened. “The relief that swept through the courtroom was palpable. Many broke down right there, in front of us,” he said.

The Supreme Court set the judgment aside in December 2013 but on September 6, 2018, again decriminalised consensual gay sex between adults.