The accused was only nine years old, it has emerged 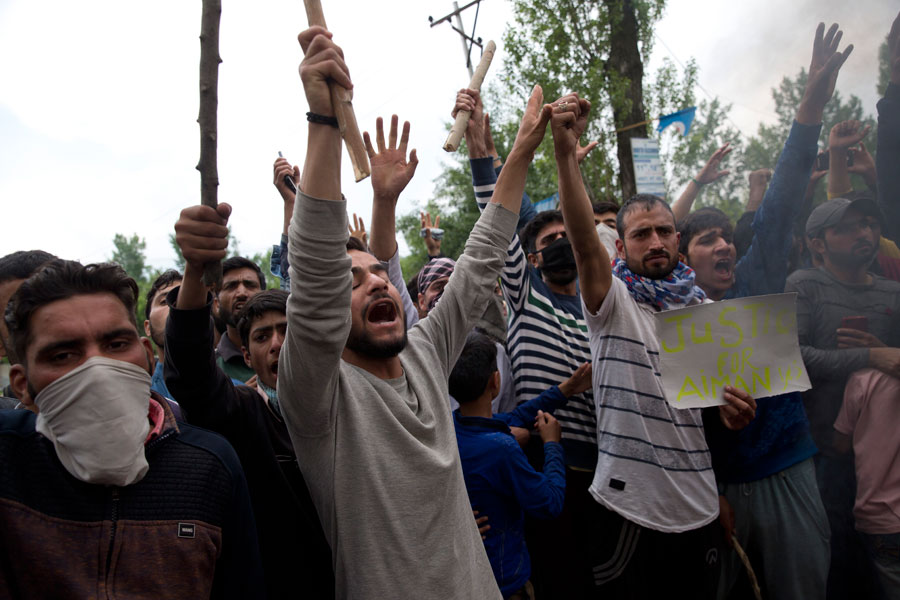 Protesters shout slogans against the alleged rape of a three-year-old girl at Mirgund on Monday
Picture by AP
Our Special Correspondent   |   Srinagar   |   Published 15.05.19, 11:42 PM

Jammu and Kashmir High Court on Wednesday asked police to file a status report within two days on the rape of a three-year-old, taking up on its own the case that has led to sectarian tensions and violence at multiple places in the Valley.

The alleged assault took place on May 8 but the situation had worsened on Monday after the principal of a private school in a village in Bandipore district issued a certificate that showed the accused was only nine years old.

The court directed the inspector-general of police for the Kashmir zone to file the status report on the probe by 10am on Friday. That was after a division bench of Chief Justice Gita Mittal and Justice Tashi Rabstan had taken suo motu cognisance of the alleged incident.

The police have already arrested the accused who had reportedly lured the toddler with a candy, abducted her and then sexually assaulted her. The school principal has been detained too.

While the crime has triggered outrage across the Valley and led to protests from across the Sunni-Shia divide, Shia protesters went on the rampage on the Srinagar-Baramulla highway on Monday and Tuesday, damaging vehicles, including ambulances, and throwing stones at security forces.

The clashes have left dozens of security force personnel and protesters injured. One youth, Arshad Ahmad, who was injured in security force action against people protesting against the rape on Monday, died on Wednesday, police sources said.

On Wednesday, however, traffic on the Srinagar-Baramulla highway plied smoothly after two days.

The protesters were particularly outraged after the principal issued the certificate that showed the accused, a school dropout, was a minor.

An employee of the school trust said the institute was open to people of all faiths and both Sunni and Shia students were on its rolls.

“The principal of our school is a Shia while the chairman of the trust is a Sunni. We cherish our diversity,” he told The Telegraph.

The employee, who refused to be named, claimed the school records show the accused is a minor and the principal had merely followed the record.

“The registry carrying the names of the students has been seized by the police. If he (the accused) has committed any crime he should be punished, but our school is not defending him,” he said.

Preliminary investigations by the police, however, reveal the accused is around 20.

Leaders of the two sects on Wednesday urged people to be wary of elements who are giving the crime a sectarian colour to foment trouble.

Shia leader Aga Syed Hasan said some people were keen to see a sectarian divide but “we should remain watchful and defeat their designs”.

Hasan said Sunni Muslims were also protesting against the heinous crime and nobody in Kashmir supported the accused.

A police officer said the accused has been booked under the Protection of Children from Sexual Offences Act, which calls for special courts to try suspects.