Anticipating an attempt to bring the bill to Rajya Sabha on Tuesday, the Congress has issued a whip to its members to be present in the House all day 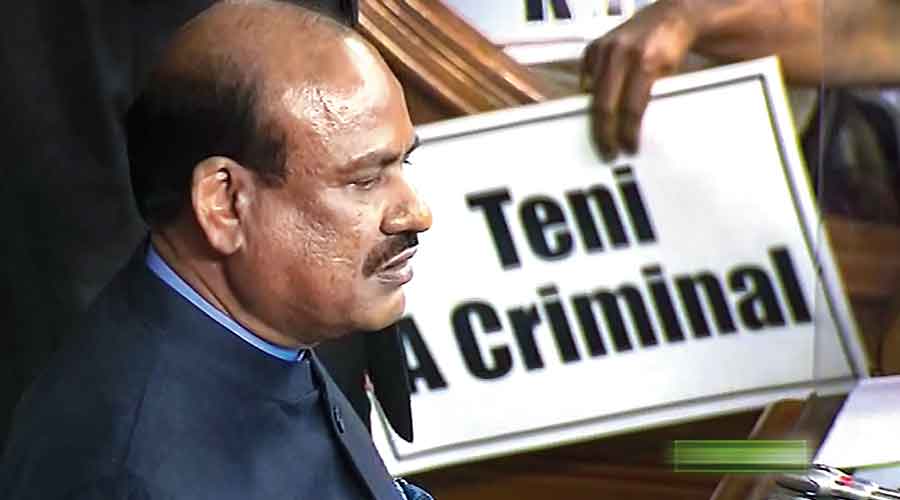 The government on Monday used its brute majority in the Lok Sabha to railroad a bill that provides for Aadhaar-linking of the electoral rolls, allowing just nominal discussion amid a din and attracting Opposition charges of “killing democracy”.

Critics of the Election Laws (Amendment) Bill 2021 fear the proposed legislation, ostensibly meant for checking “multiple enrolment”, would lead to “mass disenfranchisement” just as Aadhaar-linking is believed to have done with the ration card and rural job guarantee schemes.

The bill, introduced in the pre-lunch session, was passed after lunch while Opposition members were protesting in the Well demanding the sack for Union minister Ajay Mishra Teni over the Lakhimpur Kheri carnage.

The government accused the Opposition of not allowing a debate by creating a ruckus.

Even parties such as the BJD and the YSR Congress, mostly seen as favourably disposed towards the government, protested the way the bill was passed. “This is not the proper procedure to pass the bill,” a BJD member was heard crying out amid the din.

The Bahujan Samaj Party, which usually desists from joining the Congress-led Opposition, and the Trinamul Congress too opposed the bill’s passage along with smaller parties.

Anticipating a government attempt to bring the bill to the Rajya Sabha on Tuesday, the Congress has issued a whip to its members to be present in the House all day.

The Opposition’s numbers in the Upper House remain depleted with the continuing suspension of 12 members. But it is hoping that parties like the BJD and the YSR Congress would join any possible resistance against the bill’s passage without a proper debate.

On Monday, the bill was introduced for passage in the Lower House through a supplementary business list, giving the Opposition no time to submit proposed amendments.

The list of business for the day had put the bill up only for introduction and the Opposition had been under the impression that the government would be ready to send the bill to a standing committee.

As law minister Kiren Rijiju readied to introduce the bill amid the protests over Teni’s continuation in the ministry, member after Opposition member stood up to oppose the move.

“Aadhaar was meant to be proof of residence, not proof of citizenship. If you are asking for an Aadhaar card from the voter, all you get is a document that reflects residence,” Congress member Shashi Tharoor said. “You are potentially giving voting rights to non-citizens.”

Congress House leader Adhir Chowdhury underlined that the Supreme Court had limited the use of Aadhaar authentication to welfare programmes and asked that the bill be referred to a parliamentary panel for scrutiny.

Ritesh Pandey of the BSP said Aadhaar-seeding the voter I-card might deprive the poor, Dalits and backward castes of their voting rights.

N.K. Premchandran of the RSP said the bill “infringes on the right to privacy and violates Article 21” and added: “Parliament is not empowered to take away the fundamental rights by means of a law.”

He said the bill had already been vetted by Parliament’s standing committee for law and personnel and need not be sent to another committee.

He stressed that Aadhar-linking was voluntary and “not mandatory”, but the bill’s critics say that governments rarely honour such clauses.

All this discussion happened during a period of about half an hour in the pre-lunch session before the House was adjourned till 2pm because of the din over the Lakhimpur Kheri carnage.

After the House met again and some other pending business was conducted, the bill was passed by voice vote around 2.45pm.

The Opposition parties later boycotted a Business Advisory Committee (BAC) meeting for the Rajya Sabha that had been called in the evening.

“What is the point of legitimising this sham of a consultation when the government is riding roughshod over not just the Opposition but parliamentary democracy itself?” CPM Rajya Sabha leader Elamaram Kareem said.

“This was the first BAC after the one on November 29, though it had been the practice to have a BAC every week to decide the business of the house for the coming week and allocate time for both government business and Opposition issues.”