Sena protest in the House, seeking law or ordinance on Ram temple before the general election 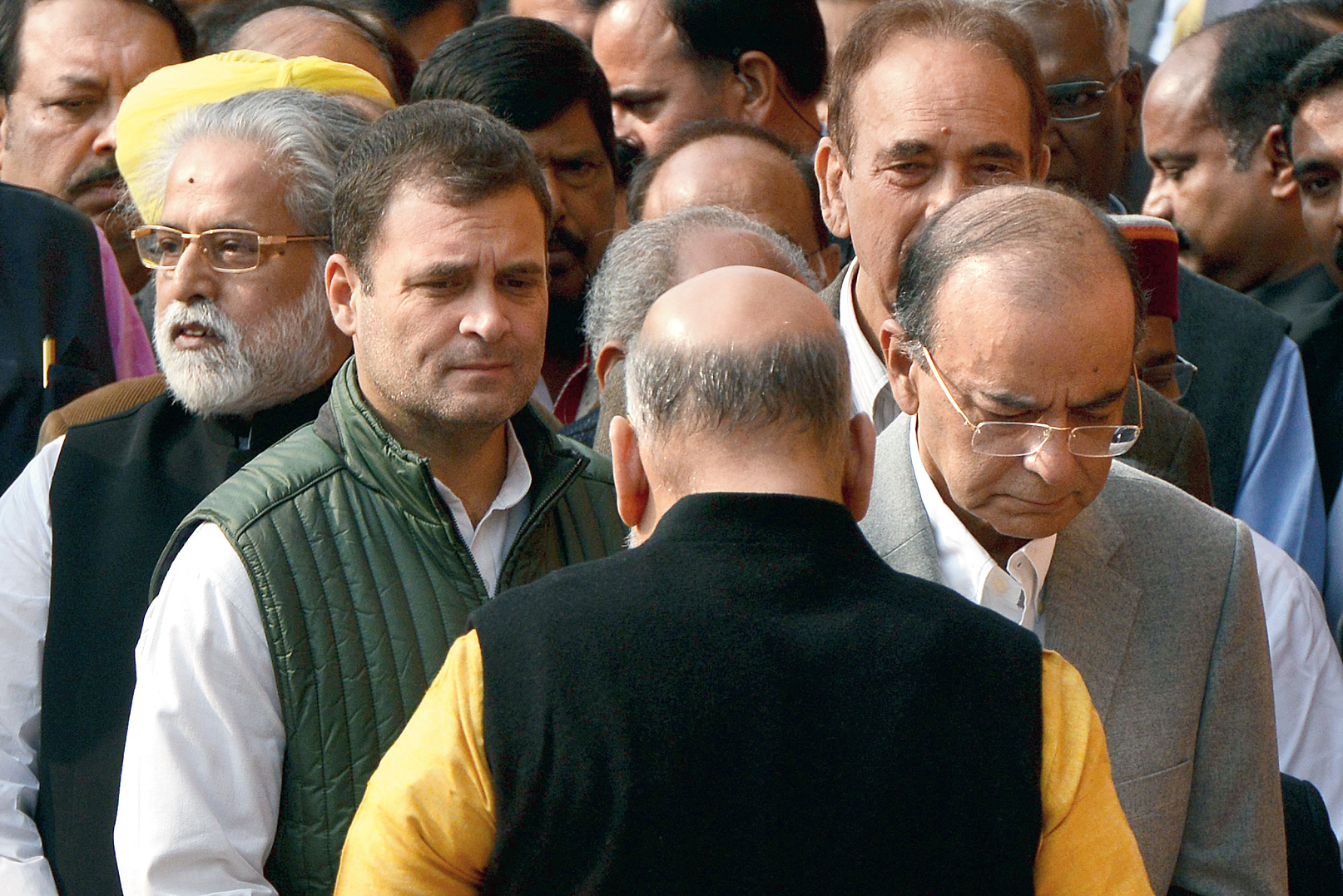 The government on Thursday ignored Shiv Sena members’ repeated requests in the Lok Sabha to respond to their demand for a law or ordinance on a Ram temple in Ayodhya before the general election, baring its dilemma on the subject.

For the second straight day, Sena members protested in the well of the House over the issue, which they raised again during Zero Hour.

They waved placards that said: “Har Hindu ki yahi pukar, pehle mandir phir sarkar (Temple first and government later, this is the cry of every Hindu).”

“Unfortunately, for the last four-and-a-half years the government has made no effort to construct the Ram temple,” Sena member Anandrao Adsul told the Lok Sabha.

“The government should bring in a law or an ordinance, or speed up the case pending before the Supreme Court, and ensure that the path towards the construction of a Ram temple in Ayodhya is cleared before the 2019 Lok Sabha elections.”

Sena members then demanded a response from the government. Parliamentary affairs minister Narendra Singh Tomar and his deputy, Vijay Goel, were in the House but desisted from responding.

Tomar and Goel would not react even after three Sena members walked up to their seats and urged them to say something and put it on record.

On key issues, the treasury benches mostly respond by saying the government will look into the matter. In this instance, the two ministers shied away from putting on record even this innocuous assurance, revealing the government’s caginess over the sensitive issue.

Party sources said the Narendra Modi government hadn’t yet decided one way or the other on bringing in a pro-temple law or ordinance at a time the land dispute is before the Supreme Court.

“Hindutva is very much an agenda for the BJP. We too want to see a grand Ram temple, but in the government one has to take several issues into consideration before committing oneself,” a minister said.

Party insiders hinted that the BJP was divided on the subject. Some Hindutva hardliners in the party want the government to push for the law or issue an ordinance to fan passions, arguing it would help the BJP in the general election. But others fear that pushing the temple agenda so close to the polls may backfire.

“Modi and the BJP swept the 2014 polls on the development plank. We secured a clear majority because a large section of voters outside our core Hindutva base voted for the BJP,” a party senior said.

He feared that the “floating voters” might desert the party if it went all out on the Ram temple.

“It could be seen as an indirect corroboration of the Opposition charge that we have failed to deliver development,” he said.

A cautious party leadership is weighing the pros and cons before taking a final call, party managers said.

“We need both development and Hindutva to win the general election but we have to carefully amalgamate the two,” a BJP source said.

Emperor’s nose smashed… Vikas mask has no use