The Birds have landed safely in Ambala, tweets defence minister 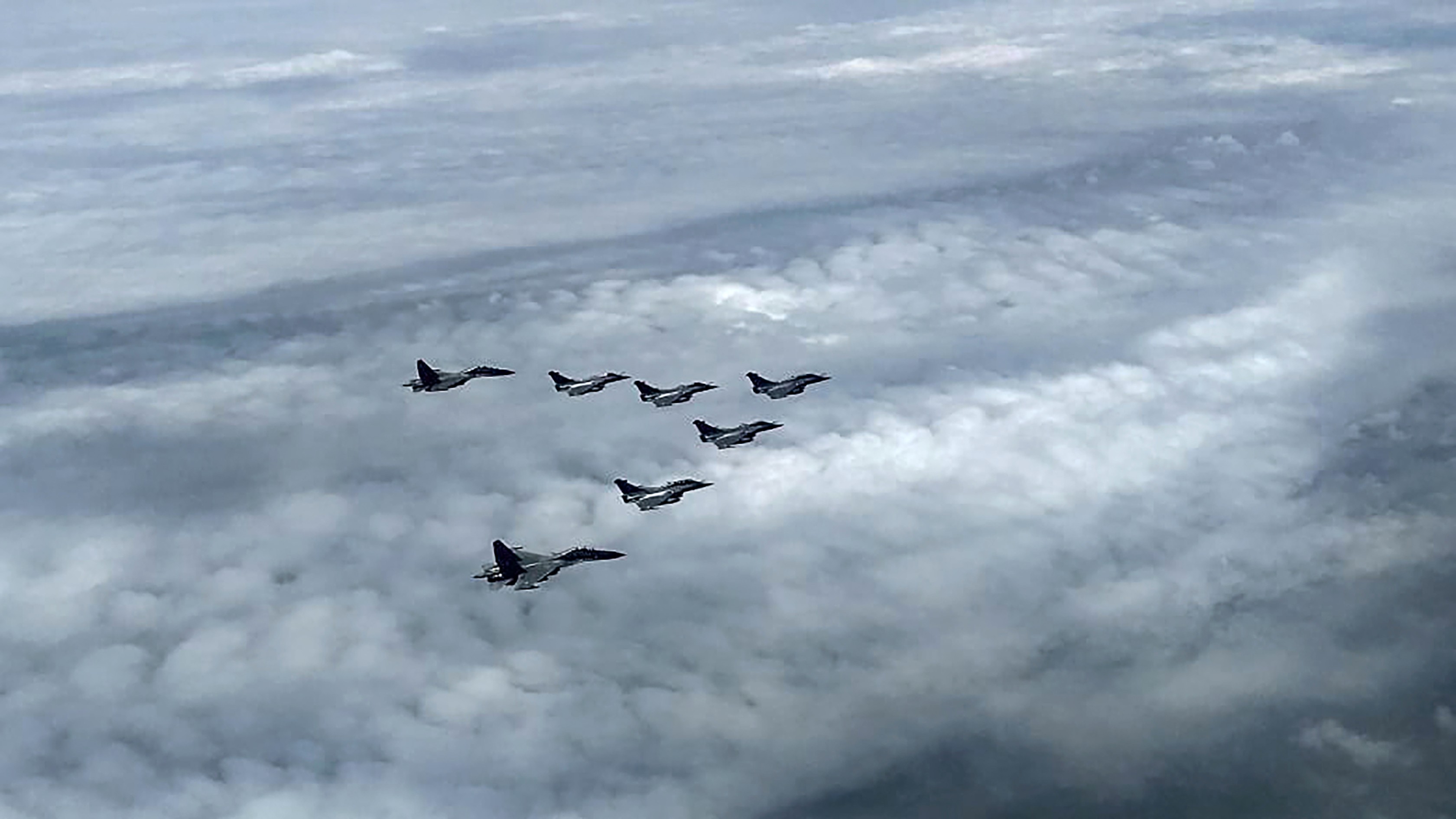 Nearly 23 years after Sukhoi aircraft were imported, a fleet of five French-manufactured Rafale multi-role combat jets touched down in India, giving the country's air power a strategic edge over its adversaries in the neighbourhood.

The aircraft, having an undisputed track record and considered one of the most potent combat jets globally, landed at the Ambala Air Force base after covering a distance of 7,000 km from the Merignac airbase in French port city of Bordeaux.

The Rafales were escorted by two Sukhoi 30 MKIs after they entered the Indian air space.

Singh said "the touch down of Rafale combat aircrafts in India marks the beginning of a new era in our Military History. These multirole aircrafts will revolutionise the capabilities of the IAF".

The Birds have landed safely in Ambala.

The touch down of Rafale combat aircrafts in India marks the beginning of a new era in our Military History.

These multirole aircrafts will revolutionise the capabilities of the @IAF_MCC.

The NDA government had inked a Rs 59,000-crore deal on September 23, 2016 to procure 36 Rafale jets from French aerospace major Dassault Aviation after a nearly seven-year exercise to procure 126 Medium Multi-Role Combat Aircraft (MMRCA) for the Indian Air Force did not fructify during the UPA regime.

The emergency acquisition was made primarily to check the depleting combat capability of the IAF as the number of its fighter squadrons had come down to a worrying 31 against the authorised strength of at least 42.

The fleet, comprising three single seater and two twin seater aircraft, are being inducted into the IAF as part of its Ambala-based No 17 Squadron, also known as the 'Golden Arrows'.

A government statement on Monday said 10 Rafale jets were delivered to India and that five of them are staying back in France for training missions. The delivery of all 36 aircraft will be completed on schedule by the end of 2021, it added.

The Rafale jets, known for air-superiority and precision strikes, are India's first major acquisition of fighter planes in 23 year after the Sukhoi jets were imported from Russia.

The aircraft is capable of carrying a range of potent weapons. European missile maker MBDA's Meteor beyond visual range air-to-air missile, Scalp cruise missile and MICA weapons system will be the mainstay of the weapons package of the Rafale jets.

Meteor is the next generation of BVR air-to-air missile (BVRAAM) designed to revolutionise air-to-air combat. The weapon has been developed by MBDA to combat common threats facing the UK, Germany, Italy, France, Spain and Sweden.

The Meteor is powered by a unique rocket-ramjet motor that gives it far more engine power for much longer than any other missile, said an official.

Though the jets are being inducted into the IAF on Wednesday, there will be formal ceremony in mid-August to welcome them into the force. Rajnath Singh and top military brass of the country are expected to attend the event.

The fleet landed at Al Dhafra airbase on Monday in the UAE after flying for over seven hours from the Merignac airbase. It was the only stopover by the jets while flying from France to India.

The jets were also refulled mid-air from a French tanker at a height of 30,000 feet, according to the Indian Embassy in France.

The first Rafale jet was handed over to the IAF in October last year during a visit to France by Defence Minister Rajnath Singh.

While the first squadron of the Rafale jets will be stationed at Ambala airbase, the second one will based at Hasimara base in West Bengal.

The Ambala base is considered one of the most strategically located bases of the IAF as the Indo-Pak border is around 220 km from it.

The IAF spent around Rs 400 crore to develop required infrastructure like shelters, hangars and maintenance facilities at the two bases.

Out of 36 Rafale jets, 30 will be fighter jets and six will be trainers. The trainer jets will be twin-seater and they will have almost all the features of the fighter jets.

India began the process to buy a fleet of 126 Medium Multi-Role Combat Aircraft (MMRCA) in 2007 after the defence ministry, headed then by A.K. Antony, cleared the proposal from the IAF.

After a long-drawn process, bids were opened in December 2012 and Dassault Aviation emerged as L-1 (lowest bidder). In the original proposal, 18 planes were to be manufactured in France and 108 in India in collaboration with the Hindustan Aeronautics Ltd.

There were lengthy negotiations between the then UPA government and Dassault on prices and transfer of technology. The final negotiations continued till early 2014 but the deal could not go through.